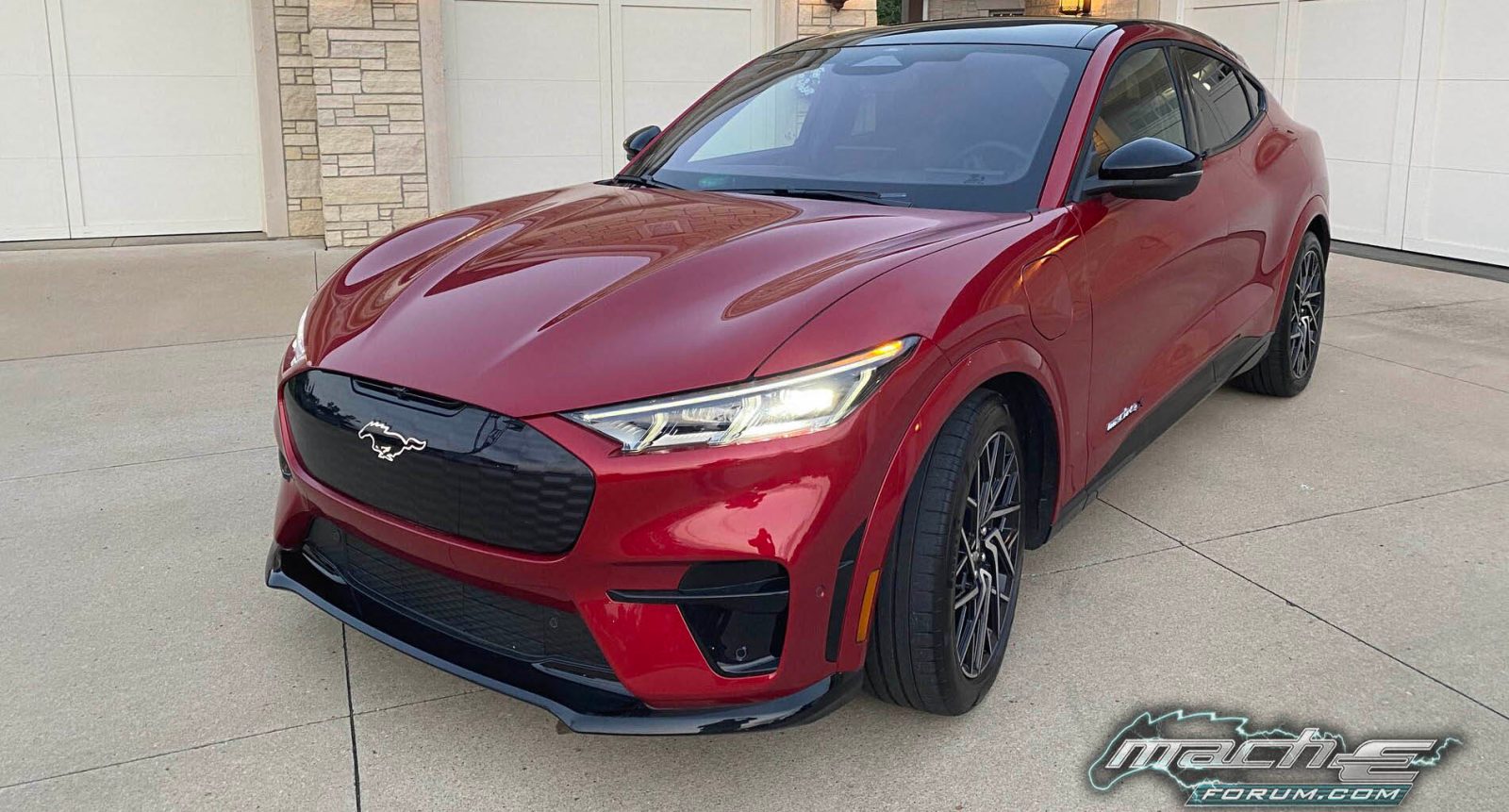 We’re now getting word that the first Ford Mustang Mach-e GT deliveries are happening. A Rapid Red GT Performance customer showed off his two-week early score in Iowa today. Are more on the way?

According to the macheforums poster 0t60-3.5, the Rapid Red model arrived last night to Cedar Rapids, Iowa, two weeks earlier than expected. He picked it up at the dealer last night, just in time to take a few snaps and charge it up.

Well, sorry, but took delivery late afternoon, departed dealership at 5:45pm, was late for a business dinner, then home, took wife for a spin, back home and took a couple snapshots, posted on this forum, got charging, and went to bed. Hardly time for more, but know for sure people are eager to see and hear more, so will dabble a little today (have work to do) but do more this weekend. Look for more soon! I would add that delivery estimate week was 8/29-9/4, so delivery on 8/19 was completely unexpectedly early, so was unprepared!

Ford currently has its big Annual Woodward Dream Cruise Media Clubhouse event happening in Detroit. Sadly, we had to decline the offer to attend because of some scheduling and Covid concerns. However, images from the event are peppered liberally with Mustang Mach-e GT Performance, so I think the cars are now flowing in earnest.

Ford had announced that there would be a six-week delay in Mach E deliveries earlier this month and offered those affected by the delay a 250kW (about 700 miles) charging credit on Electrify America’s network. With the chip shortages and other pandemic supply chain issues, Ford is making more Mach-E (in Mexico) than traditional Mustangs (in the US).

We reviewed the Mustang Mach-E First edition back in chilly February, coming away impressed with the range, ride, space and styling. It compares favorably in a lot of ways to Tesla’s Model Y.

Ford priced track-ready Mach-E GT at $60K, GT Performance at $65K, an aggressive price for its high end Mustangs that are still eligible for the current $7500 Federal Tax Credit in the US and various state and local incentives. The GT looks similar to the slower Mach-E, with the biggest difference being the plastic carbon fiber faux grill and pony show up front, shown below.

Update: Some takes from the first drives:

I would say the dark grey color is lighter in the pictures than seeing in person, so I think it does look cooler in person.

Some commentary after a day of work, few pics, and letting a few friends drive:

The dark grey color is lighter in the pictures than seeing in person, so I think it does look cooler in person.

Intense laughter when stomping on the go pedal

15 minutes later: I can still feel that power in my gut!

Heavy sense of regeneration, ie. let go of pedal and can definitely feel it actively slowing down, not coasting. (probably not specific to the GT PE)

I have to adjust power response expectations in traffic – such as goosing it to pass – need to ensure I’ve already changed lanes before goosing it, otherwise intense acceleration sneaks up too fast to car in front.

EPA estimated ranges came out for the GT and Performance Edition GT earlier this year, and Ford had surpassed its initial estimates and came in on par with its lower power versions:

The Mach-E GT Performance Edition hits a 0-60 time of 3.5 seconds, which is a pretty hot time. When reviewing the First edition, I noted:

Here’s where I don’t think people fully grasp the electric vs. ICE difference in speed. Sure, there are ICE cars that do 5 second or less 0-60 times. But to get that fast, you are downshifting, red-lining, and hitting gears jerky and hard in most fast gas-powered cars. It feels and sounds like you are doing real damage to the struggling engine that was not designed to do this often.

Compare that to an EV that just sucks you forward like a rail gun. You can do your best 0-60 at every freeway entrance forever in an EV and no one bats an eye. But if you do that with an ICE car, people are going to call the cops on you.

Update: More photos from the poster:

Under promising and over delivering is something we’re not seeing much of in the EV industry these days. I hope a lot of other makers (ahem, Tesla) are taking note.

As for the GT itself, I was very close to ordering one, but I want to test drive it first and compare it vs. the Hyundai Ioniq 5. That said, I think this is a frontrunner as my next car. I also want to see the progress Ford has made on “self-driving.”

We, of course, will keep the Tesla Model Y in the family and will use it for long trips for the immediate future. On our 200 mile trip to Vermont in the dead of winter, it performed admirably, and the non-Tesla charging network is getting much better, so I think it will be viable for longer trips soon.