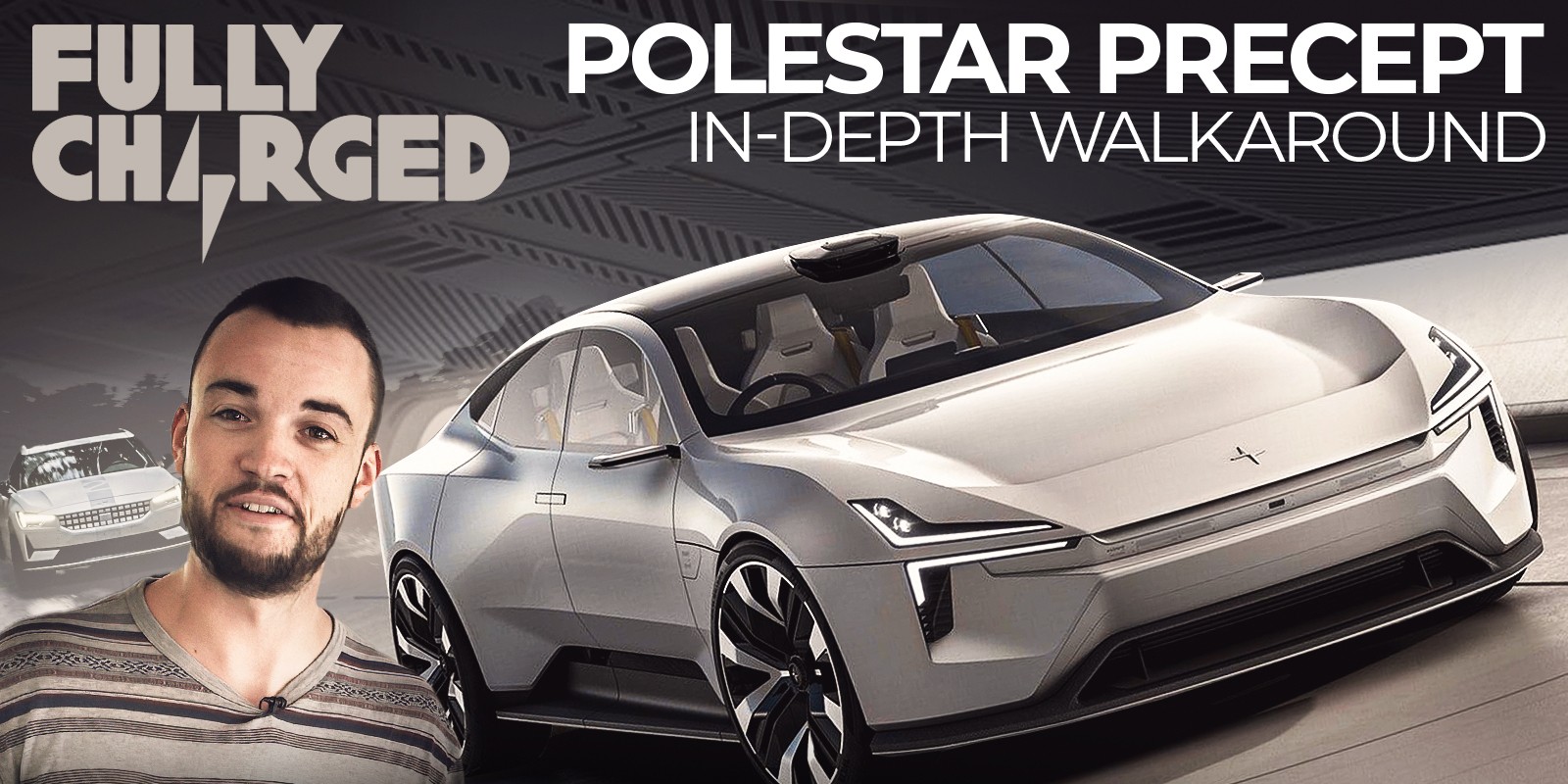 Generally speaking, getting overexcited about a concept car is a one-way ticket to bitter disappointment. Why? Because firstly, it may not even make it to production. And secondly, even if it does, it’ll probably look very “different” – aka “worse.” Goodbye massive rims, butterfly doors, and wacky interior with joysticks in place of a wheel. Hello softened edges, cheap plastics and sadness.

[This is an ongoing collaboration between Fully Charged and Electrek.]

But every now and then, a car squeaks through this transition process largely unspoiled – the Honda E and Vauxhall Mokka-E being two recent examples. And currently, I’m crossing every finger and toe I have that the Polestar Precept goes on to join that elite group of “beautiful designs that weren’t slightly ruined by sensible engineers.” Because having had a look at it up close, I can safely say that it’s one of the most remarkable-looking cars – concept or otherwise – that I’ve ever seen in the metal.

Now, the first bit of good news is that Polestar has already confirmed the Precept for production. It’s unclear whether this was the plan from the get-go, but if not, it certainly became the plan after the overwhelmingly positive reception the Swedish marque’s muscular four-door family car was met with after its digital unveiling early last year.

There are no specific timings on production just yet, and the incoming Polestar 3 SUV will most definitely jump the queue once it’s revealed early next year. We just know the Precept is happening at some point. Think mid-2020s.

The better news is that last week, at an intimate press event at the Goodwood Motor Circuit, Polestar’s design director Max Missoni informed me that as far as exterior design, the Precept will look much the same when it does eventually head to production.

Naturally, he kept it vague as to which details will/won’t stay, although you can bet the colossal 22-inch wheels will shrink somewhat, and the funky suicide doors will disappear in favor of a more conventional arrangement. I can live with that. Because even on a more sensible set of 20s or 19s (it is a big car, remember, think Taycan-sized), and even with sensible doors and some of the other fanciful concept design cues removed, provided the core shape and design remains the same, the Precept will still look absolutely sensational.

And it’s not just a beautiful thing to look at. Perhaps one of the most impressive aspects of the Precept, and one that is guaranteed to be retained for the production car, is its heavy reliance on sustainable materials – not something we traditionally associate with high-end, luxury vehicles.

In its current state, the Precept’s interior looks undeniably concept-y and will no doubt be subject to a significant makeover. But what will certainly remain is a generous application of beautifully woven flax fiber and soft 3D knit, in place of any leather, chrome, or wood.

To entirely reject the materials that, since the dawn of the motorcar have been synonymous with luxury, and endeavor to redefine our ideas of what a premium car interior should be, is an extremely bold move, and further proof that Polestar’s stated commitment to sustainability is no passing PR stunt.

And so begins the long wait to find out just how true Missoni is to his word. In the meantime, check out the video below for our detailed first look at the Precept, inside and out.