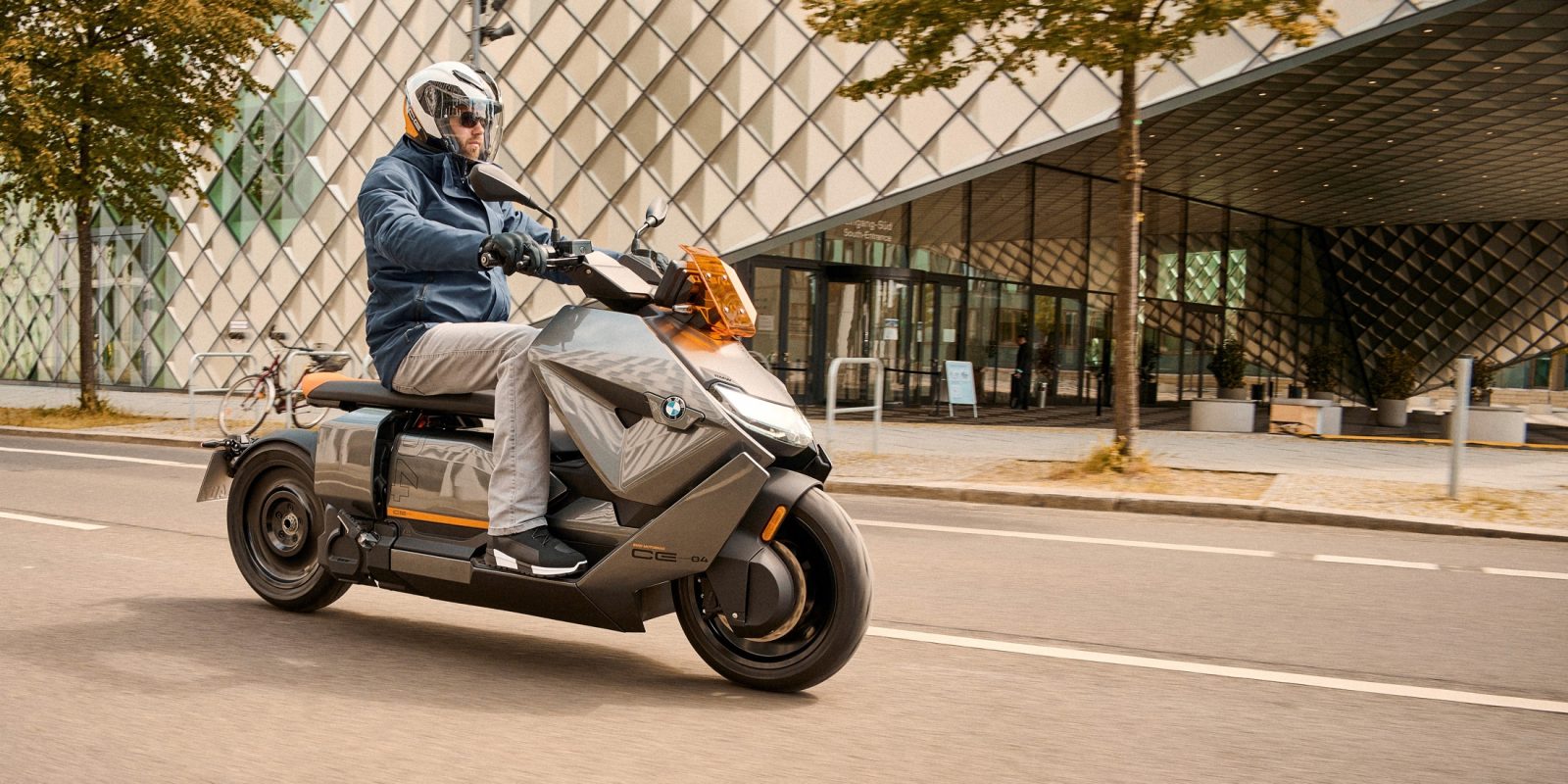 It’s finally here: BMW has brought its futuristic concept electric scooter to life as the BMW CE 04. No longer just a lofty design study, the new electric scooter is prepared for production as the first in a new succession of electric urban mobility solutions from BMW Motorrad.

But the inclusion of realistic fenders and practical mirrors hasn’t dulled the sharp, progressive design. It features no shortage of bright colors, floating panels, storage compartments, and angular edges. Even that single-sided rear swingarm puts a new twist on classic engineering.

The electric scooter includes a peak-rated 31 kW (42 hp) frame-mounted electric motor designed to offer zippy urban acceleration. BMW claims it can reach a speed of 50 km/h (31 mph) in 2.6 seconds, meaning riders should have no problem pulling away quickly from traffic lights.

Even considering the continuous motor rating of 15 kW (20 hp), the CE 04 is still much more powerful than other full-size urban electric scooters on the market.

There’s also a reduced power model with a 23 kW (31 hp) motor, though it still reaches the same top speed.

The internal battery in the higher spec model provides 8.9 kWh of capacity and is rated for up to 130 km (81 miles) of range. The reduced power model has a maximum range of 100 km (62 miles).

Based on the rather thin and flat profile of the saddle, perhaps it is best that this isn’t an ultra-long range touring scooter.

The CE 04 instead focuses on the urban commuter role, where features like an enclosed helmet storage compartment are likely to score points in the market.

The BMW CE 04 electric scooter can be recharged from a simple home wall outlet, a wall-mounted charger or a public charging station.

An internal 2.3 kW charger provides a recharge time of four hours. An optional 6.9 kW quick charger upgrade is available that reduces recharge time to one hour and 40 minutes.

The quick charger can also bring the battery from 20% to 80% in just 45 minutes, representing a more real-world quick-charging scenario.

The scooter includes advanced rider aides such as Automatic Stability Control (ASC) and Dynamic Traction Control (DTC), though the latter is an upgradeable option. There’s also a reverse gear, which is quite helpful for a heavy 230 kg (507 lb) scooter like this.

A large 10.25″ color TFT screen serves as the bike’s massive display and control center. The screen also includes navigation features, allowing riders to keep their phone in their pocket instead of using it as an added GPS device. Or riders could choose to store their phones in the bike’s charging compartment that includes a USB-C port. The scooter’s internal 8.9 kWh battery should be enough for several… hundred phone charges.

The scooter won’t be available until 2022, and will carry a price of USD $11,795 in the US. That may put it a bit above some competitors, but the new electric scooter certainly stands apart.

And perhaps most importantly, the CE 04 marks a fundamental electric shift for BMW Motorrad.

The BMW CE 04 is our new electric star for the city. It combines an e-drive with emotion and motorcycling fun. The latest technology, and the best battery cells, which also provide power in the BMW iX. Just like the CE 04, all future new BMW Motorrad models for urban mobility will be pure electric.”

With the unveiling of such a futuristic design for the company’s latest electric scooter, we have to wonder if that BMW Vision DC Roadster electric motorcycle concept will one day become a reality as well.

Check out the scooter in action in the video below, and let us know in the comments section what you think of BMW’s new direction in the urban mobility space.