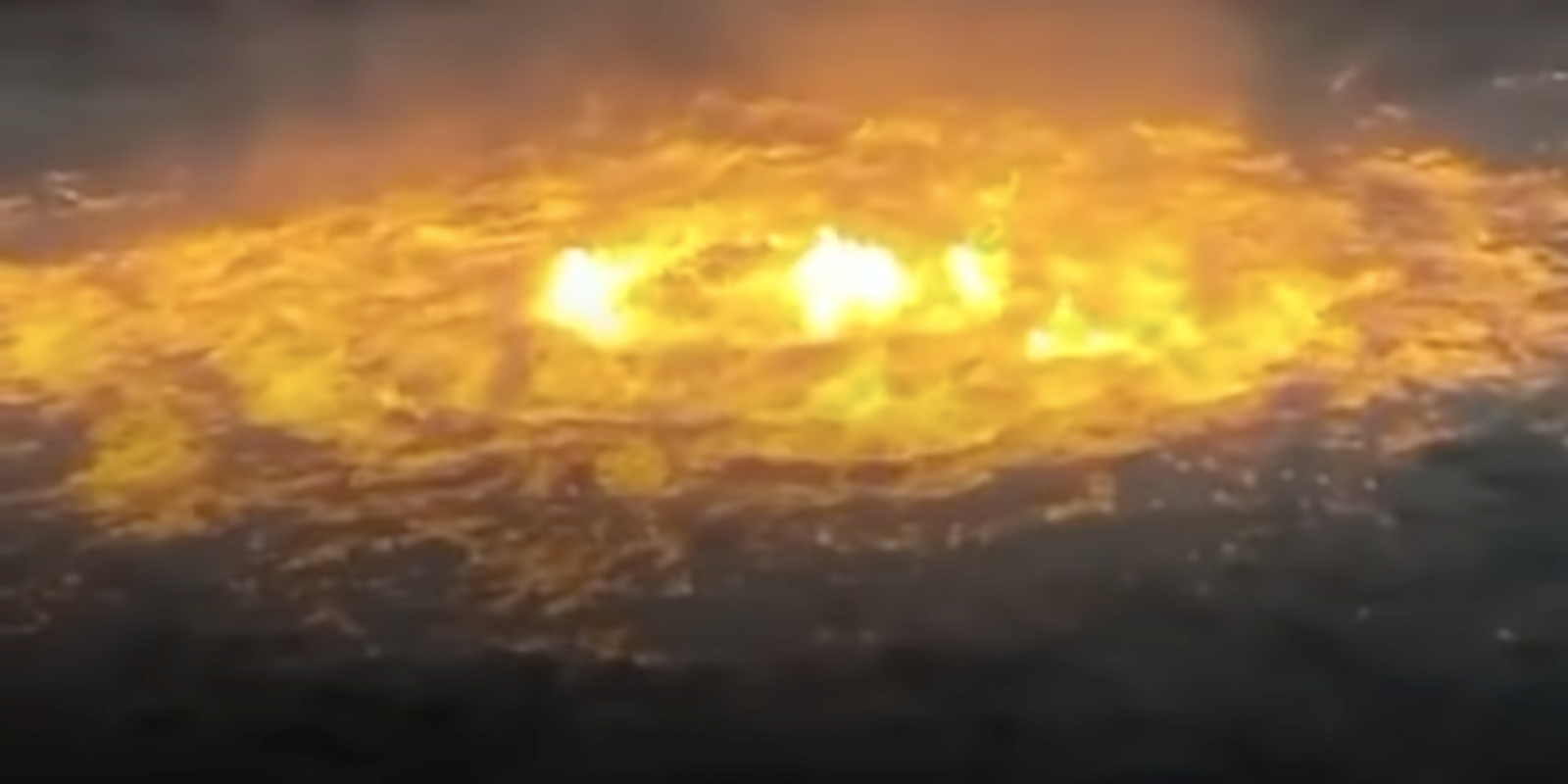 After an (American) holiday weekend largely dedicated to setting things on fire, we think it’s relevant to note something that caught on fire this weekend that absolutely shouldn’t have: namely, the sea.

Over the weekend, not only did a fire break out in the Gulf of Mexico but also in the Caspian Sea. Both incidents were, predictably, associated with fossil fuels.

The news of the Mexico fire immediately went viral on Friday, and for good reason, as the scene looked like something from an apocalyptic movie. It’s not every day that one sees water, a non-flammable substance that is generally used to extinguish fires, on fire itself.

Needless to say, this doesn’t seem like the sort of thing that ought to happen. In a body of water as large as the ocean, one doesn’t normally expect a fire to break out. Maybe the meteor that killed the dinosaurs opened a portal to hell from whence the demons have finally started to execute their invasion of the material realm. Or maybe it’s just the good ol’ evil oil industry doing what they always seem to do: ruin everything they get their greedy destructive hands near.

This particular fire has been blamed on a gas leak from a pipeline owned by Pemex, Mexico’s state-owned oil company. It burned for several hours and was eventually stopped through the use of nitrogen.

Mexico’s oil safety head Angel Carrizales stated that the fire “did not generate any spill.” Whether or not it is the case that there will be no oil slick on the ocean’s surface in the area of the leak, all that burning gas at the very least released carbon and pollution into the atmosphere. Carbon that should have stayed in the ground where it has been for millions of years, and now is in the air heating our atmosphere and choking our lungs.

But that was just the start, as we had another instance of a quite spectacular fire in the Caspian Sea on Sunday, off the shore of Azerbaijan near the Umid gas field. The most widely shared video was filmed from a nearby oil platform:

Since the Caspian Sea explosion, SOCAR, the Azerbaijani state oil company, has said that no oil platforms were damaged and blamed the blast on a “mud volcano.” Mud volcanos are a common geological feature in Azerbaijani oil fields. As opposed to traditional volcanos, they do not erupt with magma/lava, but rather methane and other gases. Azerbaijani mud volcanos tend to be quite active, exploding somewhat regularly.

The Caspian Sea explosion so far seems to have had a natural cause, but we think there is still a salient point to be made due to its proximity to oil drilling activity. The Caspian Sea is full of oil platforms.

So, perhaps we should focus instead on the Mexico fire, but multiple spectacular oil & gas-related events within a few days does raise some eyebrows.

But that’s not all

Of course, there are also those accidents you don’t hear about. There are about 100 offshore oil rig fires every year in the US, according to government statistics. Explosions, leaks, and gas releases and more all happen often enough.

In fact, we’ve been igniting waterways with fossil fuels almost since the beginning of fossil fuels. The famous Cuyahoga River in Rockefeller’s Standard Oil hometown Cleveland has caught fire thirteen times since 1868.

Inspired by the 1969 river fire, Congress was determined to resolve the issue of land pollution, not just in Cleveland, but throughout the United States.  The legislature passed the National Environment Policy Act (NEPA) which was signed into law on January 1, 1970.  This act helped establish the Environmental Protection Agency (EPA) which would be given the duties to manage environmental risks and regulate various sanitary-specific policies.  One of the first legislations that the EPA put-forth was the Clean Water Act (1972), which mandated that all rivers throughout the United States be hygienic enough to safely allow mass amounts of swimmers and fish within the water by 1983.

And then there are spills. We hear about these often, because they can create a long-term environmental disaster for communities where they do happen. But these stories generally come and go from the headlines – happening often enough that it’s not a huge news story, even if the environmental effects devastate human and animal populations for years after the spill.

In 2015, there was an oil spill in Santa Barbara, California: 142,000 gallons of crude oil spilled onto Refugio State Beach, closing down the beach for months and affecting beaches all across Southern California (if you’d like to know whether your personal choices matter, this is about as much oil as one four-car family will use in their cars over the course of their lifetimes, give or take). Laws were changed, more regulations were put in, and hopefully it doesn’t happen again. But then again, Santa Barbara already had a huge spill in the past and already changed regulations to try to stop it happening again – yet it still happened again.

The common retort is “it’s not realistic.” Too much of the global economy is currently reliant on oil. It will take too much time or effort to change everything to some technology that we’re supposedly still waiting for. Another common retort is that fossil fuels supposedly lengthen our lives – but research shows that’s not true.

The thing is, as mentioned above, these devastating impacts are nothing new. We’ve seen this damage for decades, even centuries. We’ve had plenty of time to develop alternatives – and we have developed them, but for some reason we aren’t all using them.

Electric cars are awesome now, much better to own than gas cars and well-suited to many medium- and heavy-duty applications as well, and yet still make up an embarrassingly small percentage of new vehicle sales. We have solar and wind and hydro and geothermal power. We have batteries to address intermittency – which are much cheaper than natural gas peaker plants, even when discounting the massive environmental subsidy advantage that fossil fuels receive. We certainly do not need to use as many single-use plastics as we do. We have energy efficient heat pumps and electric heaters and induction stoves for homes. All of these solutions are realistic and exist today and could replace the vast majority of oil and gas usage, and we’d be better for it.

What’s not realistic is the damn ocean being on fire. 120º temperatures in Seattle. Australia catching fire for months. Texas having hundred-year freezes – every few years. Storm season getting longer and more intense. Droughts that seem like they never let up. Yes, weather does not equal climate, but there is clearly a pattern developing here.

These effects, and more, are happening now. We are not facing the possibility of future climate change, we are in a climate emergency now.

Indeed, since the world learned that climate change is real and is caused by human burning of fossil fuels (~1970s-1980s), we’ve still managed to emit more greenhouse gases, via the burning of fossil fuels, than we had emitted in all of previous human history combined. That’s right – more than half of humanity’s total historical emissions came in the last 30 years.

We have had plenty of time to anticipate and fix this problem. And yet oil producers have kept drilling, consumers have kept buying and burning, and emissions have kept increasing. Governments and corporations have finally just started setting targets that simply are not strong enough. And the further we continue our trajectory, the more people die, the more species go extinct, the more places will become unlivable, and the more expensive and difficult it will be to attempt a fix.

The rising toll of inaction

Fossil fuel pollution kills 7 million to 9 million people globally per year. These numbers have been confirmed in reports by The Lancet, Harvard, and European Heart Journal. This is an order of magnitude more than war and all forms of human violence combined. It’s double the number of deaths from the COVID-19 pandemic, but it happens every single year. On average, each human (hey, that’s you!) dies three years earlier due to fossil fuel pollution.

So please, enough of listening to lying Exxon lobbyists about what is and is not “realistic.” We’ve had realistic solutions for a long time and we are still letting this plague of fossil fuels continue and even spread. We had our chance to stop in a planned, gradual manner. We missed that chance.

So that’s it. We need to turn off the pumps. Now. Because, remember, the damn ocean was just on FIRE.