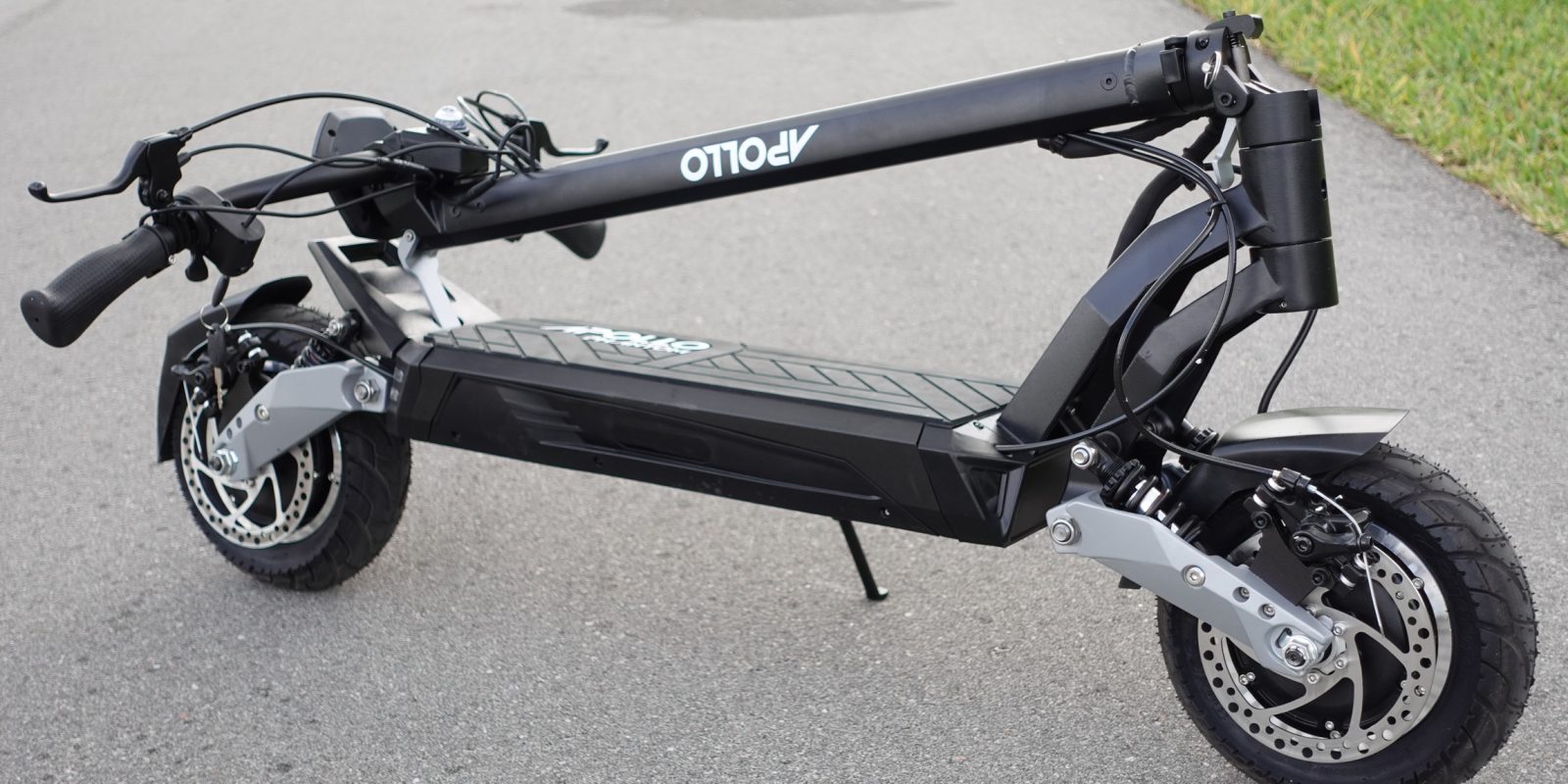 To say that most new electric scooters these days look fairly similar would be an understatement.

But instead of rolling out yet another carbon copy, the team at Apollo Scooters in Canada went back to the drawing board and created a totally new electric scooter designed from the ground up based on the user feedback it received from its customers.

And thus, the Apollo Phantom was born as an entirely new electric scooter design. In fact, it was so highly anticipated that it sold out almost immediately upon its launch this spring.

If you like ride testing videos, check out my video review below to see the Apollo Phantom electric scooter in its native habitat doing what it loves. Or keep reading for the complete details on this innovative electric scooter.

Performance that can take you anywhere!

The design of this scooter is important since it is so innovative, but I’m going to start with the performance because everyone seems to want to know the major specs, including “How fast?!” and “How far?!”

Dual 1.6 kW peak motors in 10-inch wheels are equal parts excessive and awesome. They blast me up to just shy of 40 mph (64 km/h) quickly and even slightly exceed the claimed top speed. I love it when a scooter underpromises and overdelivers.

The big ol’ battery uses Dynavolt cells (trusted by major electric motorcycle brands) and packs in over 1,200 Wh of capacity. That means you’ll likely never see less than 25 miles (40 km) of range when you ride the scooter hard and fast, but that you can also get over 40 mi (64 km) of range if you ride a bit more relaxed.

The last major performance note is the suspension. The Apollo Phantom sports quad spring suspension, meaning dual shocks on each of the two swingarms. This is a rarity in the electric scooter industry that we don’t normally see. There are also rubber bump stops that make the suspension even smoother when it reaches the end of its travel — an already uncommon occurrence.

The high suspension gives 7 inches (17.5 cm) of ground clearance, meaning you can hop those curbs with confidence or head off the beaten path without bottoming out on roots.

The downside to these high-level power and range specs is that they make the scooter heavy, to the tune of 77 lb (35 kg). You can lift it to put it in your car’s back seat or trunk, but it’s not something you’ll want to carry around the train station.

But you can’t expect to go fast and far without bumping up the weight of the scooter — that’s just how it works in this industry. Tradeoffs have to be made.

Redesigned from the ground up

The Apollo team really did a great job with the Phantom, and starting the design from scratch absolutely made a difference. Every single touchpoint on the scooter has been updated from what I’m used to seeing.

The first major update to greet you is the new screen.

Its polygonal design looks phenomenal, and the readout provides much more detailed (and smarter) data, such as your remaining range, as well as icons to let you know if you forgot your turn signals on. Oh yeah, did I mention there are turn signals? We’ll get to that.

The only downside to the screen is that in the brightest direct sunlight, it can look a bit dim. That surprised me since I would have thought that if you’re putting this much effort into a new design, you’d make the thing as bright as possible. But with everything on the scooter working so great, I guess they needed to leave room for improvement.

The next new touchpoint is the throttle. It seems that nearly every powerful scooter has preferred a trigger throttle up to this point, which has always been a head-scratcher to me. Why would you put your throttle right next to the brake and make them a similar shape? Every other electric rideable uses a thumb or twist throttle, but high-powered scooters have traditionally used trigger throttles. The Apollo Phantom brings us back to a thumb throttle with a nicely designed paddle. Full points here.

The deck also gets an upgrade from what we’re used to. It’s large, it’s grippy, and it even has a large angled footrest at the rear. I don’t often use the angled footrests on scooters because I prefer two flat feet, but I know many people like to use them for their rear foot — especially on high-power scooters like this. So it’s definitely going to be an added perk for many riders.

The folding mechanism also scores major points. It is bombproof, using a big strong claw mechanism to tighten down without wobble. There’s also a big metal pin that has to be pulled to engage the folding. Without pulling it out, you can’t fold the scooter. That’s the kind of foolproof security and robustness that I’m looking for.

The folding latch also serves double duty as a bag clip when the scooter is in use. That’s a neat feature!

When it comes to lighting, Apollo scored several more wins. In addition to the standard deck-level lighting we find on pretty much every scooter, there’s a big 1000 lumen headlight that will actually light the way for you. The rear gets tail lights and turn signals. There aren’t any front turn signals, but that doesn’t really bother me. You’re more likely to have people coming up behind you, and that’s where you want to be able to signal your intentions.

Few people will be looking for turn signals on a scooter anyways, but when they come up from behind, they’ll at least have more time to register what that blinking light on such a small vehicle means. From the front, drivers see you for even less time, and I can imagine a scenario where they’ll only see a blink or two before passing and don’t even realize it was even a turn signal.

Even so, I’ve got a dozen or more compliments to meet each of my few single complaints, meaning I’ve been really impressed by the Apollo Phantom during my time testing it so far.

When it comes to pricing, it isn’t cheap, but it’s actually quite well-priced compared to other high-power and high-performance electric scooters on the market. The scooter is available in Canada directly from Apollo Scooters, or customers in the US can get it from Apollo’s local exclusive sales partner FluidFreeRide in Miami. Both offer free shipping online.

I tested the disc brake version, and the 160 mm discs were plenty powerful when combined with the regen-braking. I’ve always been a fan of hydraulic disc brakes when available since they allow stronger one-finger braking, and you can basically forget about making adjustments on them, but the ability to save some cash by getting the mechanical disc brake version is, of course, a nice addition.

It’s just one more thoughtful aspect that Apollo included in the design of the scooter — the cherry on top.

What do you think of the Apollo Phantom electric scooter? Let’s hear your thoughts in the comment section below!