Honda patents Grom-style electric minibike; could it be the perfect urban commuter? 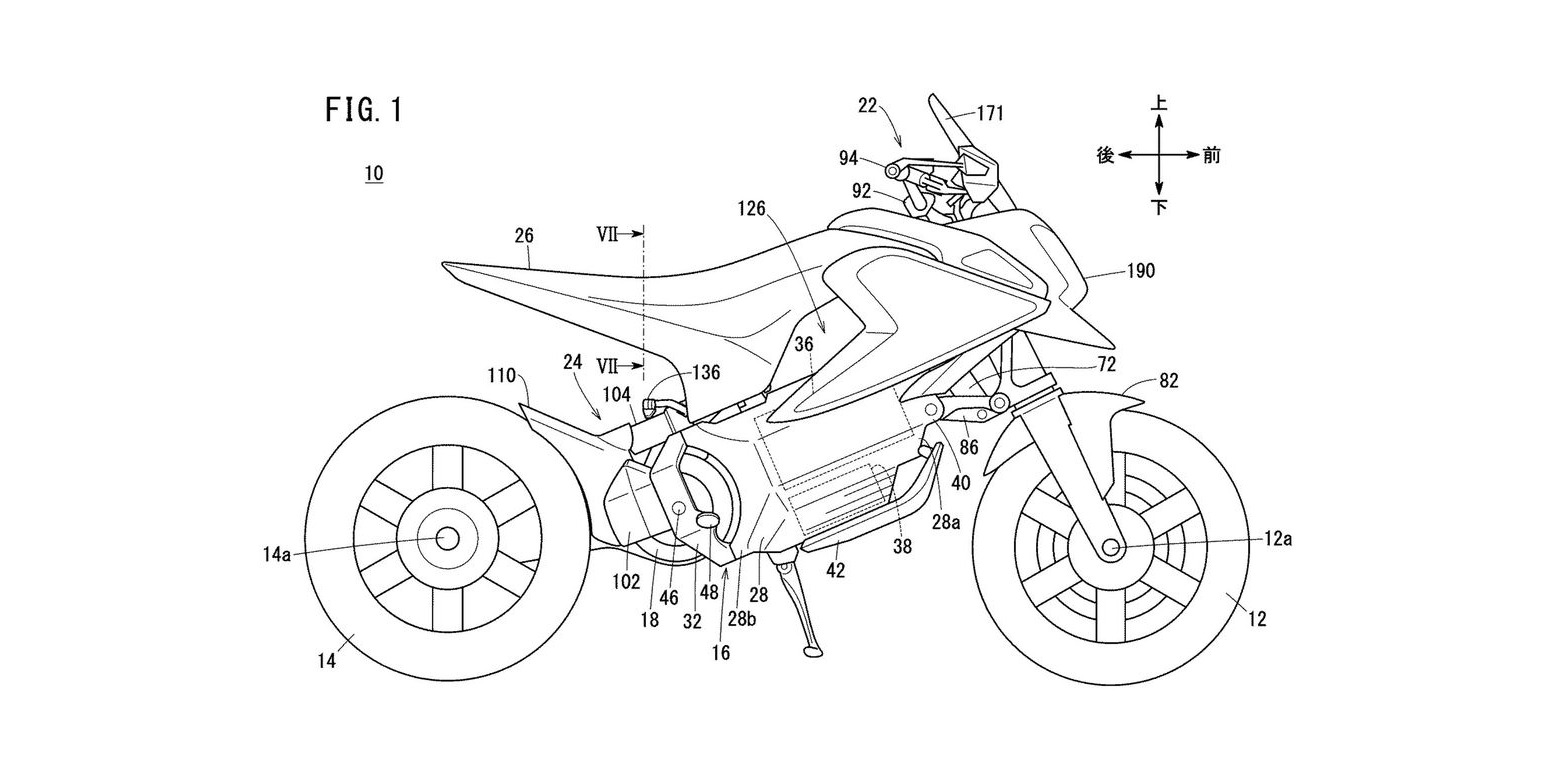 Honda has just patented a new electric motorcycle that seems to take a page out of the popular Honda Grom’s playbook.

The Honda Grom is a 125cc mini-motorcycle.

It’s not powerful or particularly fast or even long range, but it sure is fun to ride. That’s helped it become a favorite among motorcyclists as an urban play bike.

And now a few Japanese patents filed by Honda show that the company appears to be adapting the platform with an electric version.

The drawings show that the bike isn’t just an electric Honda Grom, but rather a new model that was designed to be a purpose-built electric motorcycle. It shares much of the Grom’s geometry, but in an entirely new design.

The small wheels and sportbike-inspiration are both there. But the design also incorporates several innovations such as a Hossack-type front suspension that incorporates dual wishbones and a monoshock instead of a typical telescopic fork with two shocks.

The bike is built on a monocoque chassis with a mid-mounted electric motor and features a single-sided rear swingarm. The patent doesn’t include any performance specs, but the Honda Grom’s top speed of around 55 mph (88 km/h) would be likely in the ballpark for a minibike like this.

It also isn’t clear what type of battery Honda is planning to use in this minibike, but it could potentially incorporate the swappable battery system from Honda’s PCX electric scooters.

Honda is also part of a consortium developing swappable electric motorcycle batteries with several other major motorcycle manufacturers, and the bike could be destined to use the new battery standard developed from that partnership.

In addition to the standard components we normally see on these types of motorcycles, the Honda patents show some rather high-tech bits as well. Small rear-view cameras mounted in the bar ends replace mirrors, instead feeding their images directly to handlebar-mounted displays.

It is unlikely that such a system would actually be employed on a production bike, but Honda may be trying to cover as much ground as possible in the patent to pave the way for such components in the future.

There is no indication that the electric minibike is destined for production at this point. If it does make it into dealerships though, it could be an interesting play for more urban-focused commuter riders and as a way to get an electric motorcycle in the garage of more conventional gas bike enthusiasts in the form of a second bike for fun riding.

Other Honda Grom-style electric motorcycles such as the CSC City Slicker have found success in the US in urban-only roles, often helping open the door for non-motorcyclists to throw a leg over their first motorcycle.

As companies like SONDORS bring more designs for urban electric motorcycles to the market, Honda and other legacy manufacturers may struggle to play catchup.

With no need for large batteries to enable longer range riding, urban electric motorcycles can be built around smaller, less expensive battery packs.

Several cute options are starting to enter Asian markets and have eyed expansion internationally. I threw a leg over Tromox’s Mino electric minibike at the last Milan Motorcycle Show (seen below) and I can definitely see the appeal for urban-only riders. The electric minibike in Honda’s patent appears to be a bit larger and would likely serve as a potential gap-filler between full-size electric motorcycles and smaller electric bicycles.