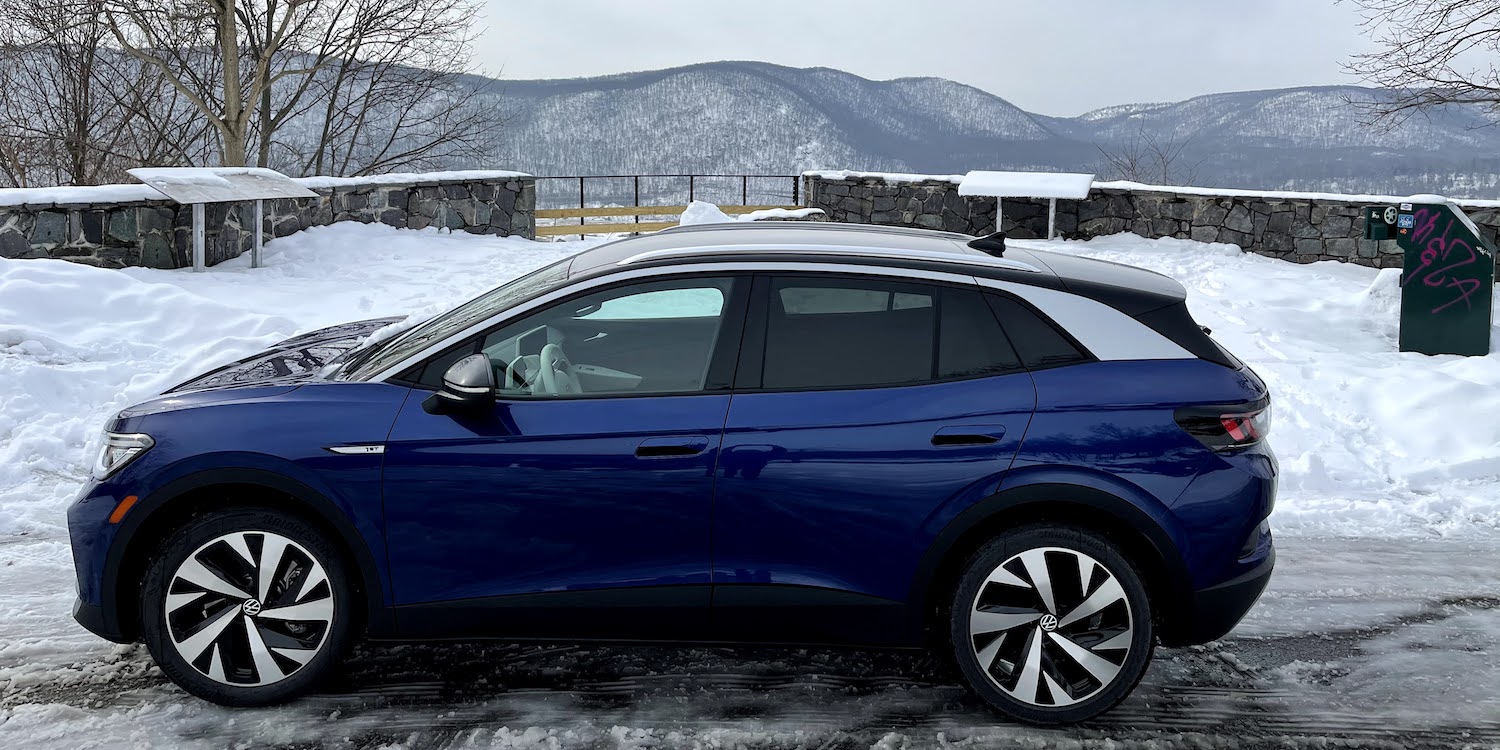 We finally got the chance to get behind the wheel of VW’s ID.4 electric CUV this week. This is 36 hours with the 1st Edition RWD, and it was mostly during a winter snowstorm in New York. But we still had time to give it a proper drive and get some initial thoughts to see if VW has a huge hit on its hands.

VW delivered the cobalt blue version of the ID.4 up my partially plowed driveway about an hour before the snow started. But even getting it up the driveway was a challenge, and the driver left it in a pile of last week’s snow, which required some shoveling to get it out. That’s the long way of saying the VW ID.4 1st Edition isn’t a great snowy weather traction vehicle. For those with snow, wait for the AWD version that will be released – perfectly timed like this one – this summer and eventually those will be built in Chattanooga, Tennessee.

But I did get a few hours of drive time with the ID.4 before the roads became dangerous, and right off the bat, it is a pleasure to drive. I immediately went to the coffee shop, then the store to pick up some groceries, and off to the local photogenic dam. Then the snow started to fall.

In fact after driving a Mustang Mach-E and owning a Tesla Model Y, this car is refreshingly “normal.” You don’t have to explain the internal or external door handles to new passengers for instance. They are normal looking and where you’d expect. The dashboard has some buttons (but not too many), and the whole car doesn’t run off of one huge display – for better or worse.

The 1st Edition white steering wheel/cluster and dashboard accents are refreshingly airy and, combined with the glass ceiling, provide a bright, open, welcoming environment. VW compares the design to the iconic Bug in its simplicity, and it is absolutely appealing. The exterior isn’t at all “weirdmobile,” and in fact, most normal people wouldn’t even suspect it is electric. It is just a nice, clean overall package.

The honeymoon ends however when it is time to put the car into drive. Instead of a tree shifter, VW went with a dial on the top of the dash (a la BMW i3) that you have to double click to put into regenerative braking “1 pedal driving” mode. Most uninitiated drivers, after seeing an empty center console, will instinctively grab the windshield wiper stalk, which is placed where you’d expect to shift.

Once you are in drive, however, all stress melts away. The ID.4 effortlessly and quietly slings its 4,600 lb. self forward. The drive feels otherworldly smooth if not exhilarating. Somewhere between sport and touring, the steering is easy and accurate with an impressively small turning radius. Braking is also solid with regen in the back making up for drum brakes in the rear (disc up front). One pedal driving is a little soft – I’d put it between weak Tesla Model Y and stronger Mustang Mach-E and even stronger Chevy Bolt. You can make it work if you think ahead.

The ID.4 doesn’t have pickup like a Tesla or even the Mustang Mach-E, but it is no slouch on the on-ramp either. Like other EVs, it has an Eco mode, which you will never want to use (just like the default 2-pedal drive mode), as well as a 201HP, 228 lb/ft torque “Sport” mode. Those 201 horsepower are on par with the significantly smaller Chevy Bolt, and as you’d expect, it comes in just a bit slower. Again, not at all a slouch. 0-60 is in the low 7 second range.

If you are looking for sporty riding, the AWD model coming late summer will also have 50% more power at over 300hp. I’d expect that to compete with the Mustang we reviewed last week.

Range-wise, you can expect to get the 250 miles (402 km) of EPA-rated range, which I wasn’t able to test in my limited time but seems accurate for the 82 kWh (77 kWh usable) battery pack. It was cold and snowy so I was getting about 90% of the rated range. Your mileage may vary™.

The 11kW Level 2 charging at home is unremarkable and you can expect to add 30+ miles per hour of charge, slightly less on the more common 1,25kW cables which VW includes. I do have to gripe a bit about the cheap tether on the DC plug, which I feel is better served with a swivel hinge. VW seems a little rushed here.

Speaking of DC, I wasn’t able to test out the 125kW fast charging because the closest Electrify America was out of service. Also the ID.4 doesn’t have the “Plug and Charge” standard, but VW tells me this is a planned over the Air update. We’ll drill down here in the longer review soon.

I was initially bummed that the production ID.4 was a much tamer version of the prototype, but having now seen it in person, I’m a huge fan. Those big 20-inch wheels and smooth lines? This is a gorgeous car.

So there’s no frunk, just some loosely packaged electrical equipment and cooling fluids that really should have been packed tighter. The storage in the back is ample however with a rear area similar to a Mustang Mach-E or Tesla Model Y. There’s two fake floors for storage of things you want to hide or don’t need often.

Here’s something cool about the VW ID.4. If you’ve got groceries or bags in your hand you can just kick the back and the rear door will open. Neat!

One way to see how serious an automaker is about electrification is to check their homepage. Like I mentioned in the Mach-E review, Ford makes you hunt for it. Chevy? Coming soon? But VW is broadcasting the ID.4 loud and clear on its homepage and SUV page. They are serious about moving a lot of these.

And they are hitting all the right notes here. Where it may not have the specs that us EV nerds love, it is nimble and and traditionally beautiful inside and out. It will appeal to mainstream users. In fact, VW isn’t positioning the ID.4 against the Tesla Model Y or Mustang Mach-E or Chevy Bolt as we’ve done here. It is putting it up against Toyota’s RAV 4 and Honda’s CR-V and plans to win over those drives. That’s something we here at Electrek love to see. And with this package, I think VW will succeed.

That said, as EV nerds, while we can’t wait to see what VW can do with the speedy AWD model this summer, I need something that can make it up my driveway in the winter.