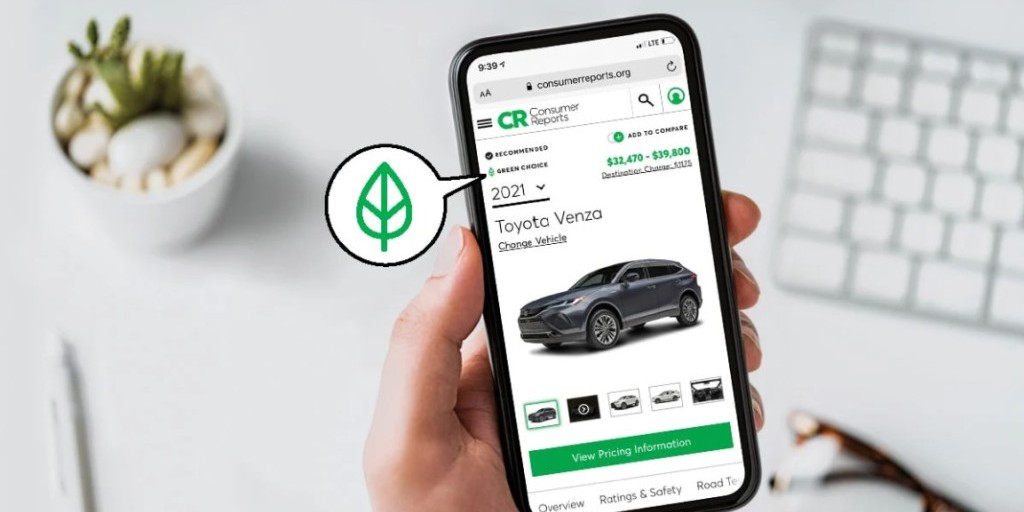 Consumer Reports has launched a new Green Choice program for cars. It will use a green leaf icon to identify the new cars, SUVs, and minivans with the best fuel efficiency and lowest contributions to atmospheric carbon dioxide levels and smog formation.

Our new Green Choice designation highlights the top 20% of vehicles on the market with the cleanest emissions. Green Choice cars, SUVs, and minivans are indicated in our ratings by a green leaf icon and are gas-powered, hybrid, and electric. The new rating was developed in collaboration with the Environmental Protection Agency’s SmartWay program, which rates vehicles for levels of greenhouse gas and smog-forming emissions. Green Choice allows consumers to make a more informed decision when shopping for a new vehicle. We also indicate which cars meet the Green Choice standard in our online ratings and model pages.

The EPA information is of course already available on a new car’s Monroney window sticker, as per below in the bottom right box (but hey, the more info, the better):

Consumer Reports then makes an explicit plug for electric vehicles (which, dear Electrek readers, is information you already know):

Buying an electric vehicle is one of the most effective ways to address the nation’s air pollution problem because EVs produce no direct emissions. CR research shows that owning an EV will save the typical driver $6,000 to $10,000 over the life of the vehicle, compared with owning a comparable gas-powered model. But EVs currently represent only about 2% of the [US] passenger vehicle market. This number will undoubtedly climb: California has pledged that all new passenger vehicles sold in that state will be zero-emissions by 2035, and General Motors has signaled that it wants to produce an all-electric fleet by that same year. But until auto manufacturers make EVs more widely available, choosing a gasoline vehicle with low smog-forming and greenhouse gas emissions is one of the easiest ways to help reduce air pollution and the harm it does to health and to the environment.

EVs are best for the environment, but you can still meaningfully reduce your impact by choosing the right gas-powered car or truck.

About a quarter of CR’s recommended cars earn the Green Choice designation, including midsized vehicles and even some larger hybrid SUVs and minivans.

The Tesla Model 3 is in Consumer Reports‘ 2021 Top Picks list. Four of its 10 Top Picks are Green Choices. Tesla is the only American brand – and the only fully electric car – on the Top Picks list overall.

Seeing that the Tesla Model 3 is the only American brand, much less the only EV, on their Top Picks list, it looks like US automakers have some serious work to do. Let’s earn those green leaves, automakers. GM, we’re looking at you to lead, and hopefully we’ll see the Ford Mustang Mach-E pop up soon.