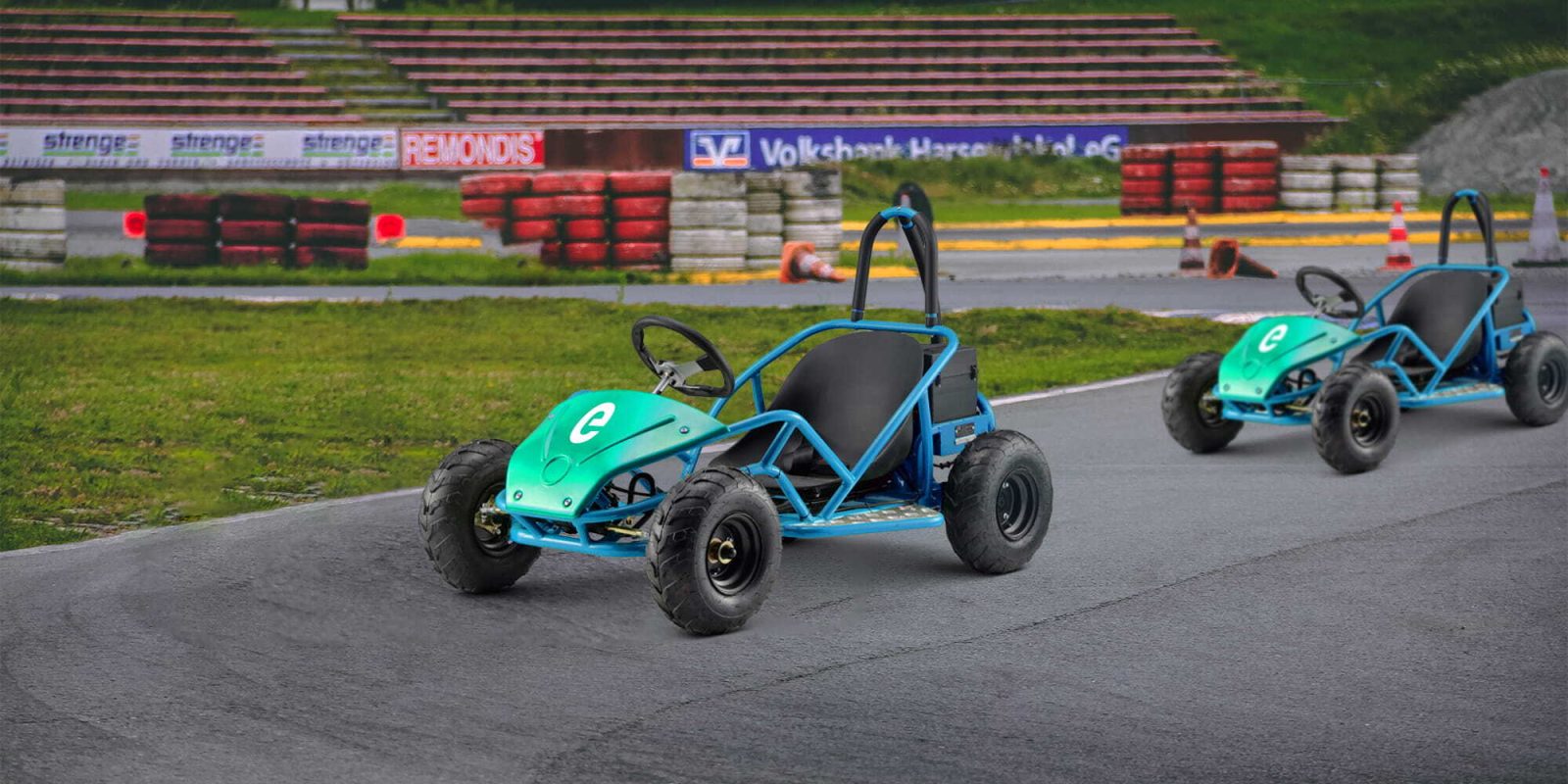 Go-karts are the perfect fun-mobiles to bring out the kid in anyone. But gone are the days when you had to choke down a cloud of exhaust to the deafening roar of a single screaming, overworked piston. These days, electric go-karts are providing kids and adults alike with fast, silent, and clean thrills around the local track or the neighborhood lady’s rose bushes.

For this week’s entry in the Awesomely Weird Alibaba Electric Vehicle of the Week, I’ve found a pair of interesting electric go-karts for both adults and kids.

As much fun as the weird electric SUV I found for last week’s entry was, $3,200 may still be a bit steep for some people.

So what do you think of this $390 electric go-kart instead, eh?

Designed for off-road racing as well as tarmac shenanigans, this little thing can hit speeds of up to 20 mph (32 km/h) thanks to its 1,000W motor.

Now I know what you’re thinking: “Sure, I’m professional. I can handle this thing on two wheels at 20 mph. But do I want to put my 7-year-old at the wheel under those speeds?”

Fear not, responsible legal guardian! The go-kart has three selectable speeds with options for slower 5 and 10 mph (8 and 17 km/h) settings with a key switch that your mischievous kids can’t alter without your help.

The only downside is that the battery is an old-fashioned lead acid brick.

The first mod I’d do to this thing is swap in a cheap new 48V and 20Ah Li-ion battery to shave off a few dozen pounds and add on a few more years of life expectancy.

If you buy a bulk lot of them the company will even let you customize the karts with your own logo.

It kind of makes me want to buy a fleet and hand them out as gifts to the Electrek team so we can start our own racing league!

And if you’re saying, “Hey… aren’t those go-karts just for kids?” – well then, I’ve got something to show you.

You may have to go all high-knee on me, but the video below shows an adult having some fun on one of these awesome little electric go-karts, so I’m sure I could make it work.

Though when the roll hoop is at neck height, I think your head becomes the de-facto roll hoop. That’s nothing a little helmet can’t fix though!

Alright, so that was my entry for the shared kid/adult electric go-kart. But if you want something purely for your kids, I’ve got another cool find for you.

And not only is this one a fully capable electric go-kart for children, but it even folds in half! That makes it easy to toss a few in your trunk and drive the family to the park for some fun that won’t bother your neighbors.

Now, this one isn’t quite as fast or powerful as the first electric go-kart I listed. Its 500W motor only gets it up to 17 mph (28 km/h). But your wife will probably be happier with that anyways, and you’ll still be able to keep up with your kids in your own 1,000W 20 mph electric go-kart.

Even though this folding e-kart isn’t as powerful, it has some nice features the other doesn’t have. The rear gets suspension, and there are some other features like a horn and even dual motors. The two rear wheels are 250W hub motors, leaving space above the rear axle for a 36V 10Ah Li-ion battery. There’s no heavy lead acid pack to swap on this one!

I actually discovered this awesome little folding e-kart thanks to Electrek reader Jeff S, who shared it with me after buying his own. He had originally purchased an ONYX electric moped and then decided to get an electric go-kart for his kids so they could keep up with him.

His kids Presley and Chasey even did an awesome video review, shown below. With their 100% “like” ratio, I better watch out, or they’re going to have my job soon!

The folding electric go-kart has a price of just $298, which sounds pretty darn fair to me!

I don’t see any option to customize it like the first go-kart, but I can live with the Candy Apple Red colorway.

Shopping on Alibaba: A word to the wise

I’ve said it before, and I’ll say it again: Even though I’ve made plenty of purchases on Alibaba and AliExpress myself, I always advise caution for newcomers.

There are tons of awesome products and even more awesome deals on both platforms, but you also have to be careful. There can be a number of surprises such as unexpected fees or miscommunications resulting in products that aren’t exactly what you expected.

The best way to have a positive experience on Alibaba is to be as clear as possible when communicating with sellers. And always, remember that if something doesn’t turn out, both platforms have buyer protection that can help get your money back from escrow before it ever reaches the seller.

While AliExpress has a more convenient Amazon-like shopping interface, it isn’t always the best deal. For example, both that folding go-kart can be found on AliExpress, but the price is much higher than on Alibaba.

And if you’ve bought something weirdly awesome on Alibaba, or just went window shopping like me and found something cool, feel free to share it with me! It just might get featured on next week’s edition of the Awesomely Weird Alibaba Electric Vehicle of the Week!