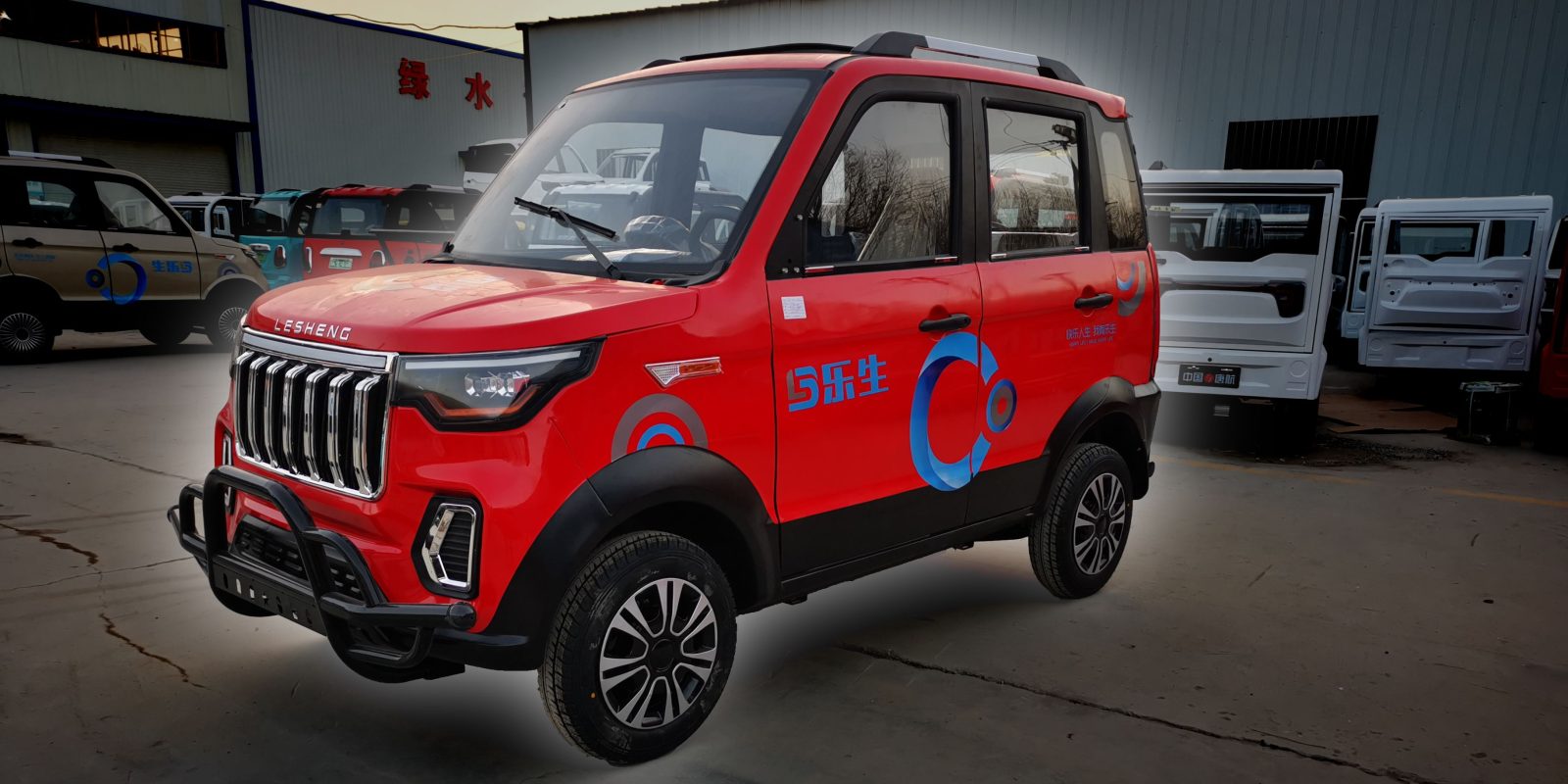 Whether toting the neighborhood kids home after soccer practice or loading up for a road trip, SUVs offer the ultimate in vehicle utility. If you’re in the market for an electric SUV though, the options are both few and pricey.

Unless of course you head on over to the coolest little corner of the web, the electric vehicle market on Alibaba. That’s where I found today’s entry for the Awesomely Weird Alibaba EV of the Week: A pint-sized SUV that offers all of the charm and none of the utility of a full-size electric SUV!

Ok that might be a bit harsh – it’s not that it offers none of the utility of a larger electric SUV. It’s just a bit… on the smaller side.

Measuring 2.9 meters (9’6″) from bumper guard to bumper guard, the Lesheng K2 electric SUV is short in stature but big in heart.

As long as the heart isn’t the motor, as this cute little runabout is only packing a 4,000W motor. But that’s enough to cruise at a solid 52 km/h (31 mph), so it already beats the top speed of the $4,000 electric pickup truck and the $1,700 electric Jeep I found in previous weeks.

Weighing in at approximately 615 kg (1,355 lb), the four seater electric SUV likely isn’t going to win any traffic light drag races with that 4 kW motor. But these little Chinese electric cars are all about utility, not speed.

This is a glorified NEV, or neighborhood electric vehicle. You may be tempted to dismiss it as a souped up golf cart, but you’d be wrong. The Lesheng K2 is loaded to the roof rails with features. We’re talking true air conditioning, backup camera, 9-inch LCD display, stamped frame, adjustable seats, remote key fob lock, multimedia player, windshield wiper (singular), power windows, spare tire on back and even something called a “special controller”. I don’t know what that last one is, but it sure sounds special!

You can see the full specifications in the tech spec sheet that I scored here.

The charger type is listed as “normal charge”, which I’m not quite sure what to make of. I suspect that means you won’t be pulling up to a Tesla Supercharger in one of these. More likely you’ll be backing in next to a 7-11 ice box and guerrilla charging with an extension cord while you pour the world’s slowest cup of coffee.

Considering its max speed is half of the range number, you could presumably be looking at around two hours of continuous driving time. And does it really look like anyone is planning on driving for two hours in this thing?

That 159 kg (350 lb) battery pack is quite portly due to its old school lead acid bricks. You could do your own Li-ion upgrade with four of these 60V 25Ah Li-ion batteries for $1k total, shipped.

Alright, so it’s small, cute, nicely outfitted with creature comforts and even has that “special controller”. I’m sold. Now let’s get down to brass tacks.

I got in touch with the company to see how I could become the proud new owner of a Lesheng K2.

My man Michael Du is a knowledgable sales rep who walked me through the vehicle details, hammering home how proud the company was of their air conditioning system.

He even sent me this weird video of the air conditioning unit being tested (below). I didn’t have the heart to tell him that the dang thing could literally blow hot and sandy Sahara air in my face, I wanted the car mostly because of how funny it looked.

Once we both agreed how amazing the air conditioning was, we started talking numbers.

Michael told me that he could hook me up with my own fleet of K2s for just $3,200 a pop! But when I told him that it’d probably be better to start with just one sample for evaluation, he had to ding me with a $1,000 sample fee. Ouch.

I’m still waiting on the freight estimate – pretty much all of China is shut down right now while they celebrate the Lunar New Year (happy new year of the Ox to all of our celebrating readers!), and so I can’t get a freight quote anywhere. In fact, props to Michael for helping me as much as he has during the holidays.

I had been quoted a sea freight charge of $195 a few weeks ago for that $1,700 electric Jeep thing I found, and the K2 electric SUV isn’t that much bigger than the Jeep. So hopefully freight charges won’t rocket the price too terribly high on this thing.

Would I really buy it?

As my regular readers know, this Awesomely Weird Alibaba EV of the Week series is largely just a fun exercise to discover some of the cool, weird and just plain oddball electric vehicles available.

Sure, I’ve made plenty of Alibaba purchases before, and probably hundreds of purchases on the AliExpress platform, which is Alibaba’s more retail-focused (and easier to use) shopping portal.

Despite how cool it looks, I don’t think I’ll be adding a Lesheng K2 electric SUV to my order history list any time soon. And I’m not advocating for anyone else to buy one either. It’s mostly just fun looking at what is out there.

But if you do decide to take a risk on something like this, you should know that shopping on Alibaba isn’t for the timid. It can be risky due to the difficulty in communicating with vendors to ensure you know exactly what you’re buying. The wait times are long and the cheap prices are often inflated by unexpected fees from port charges, customs brokers and other fun surprises along the way.

The vast majority of my own Alibaba purchases have been quite positive experiences though. So if you are careful, patient and well researched, you just may find something weirdly awesome for yourself.