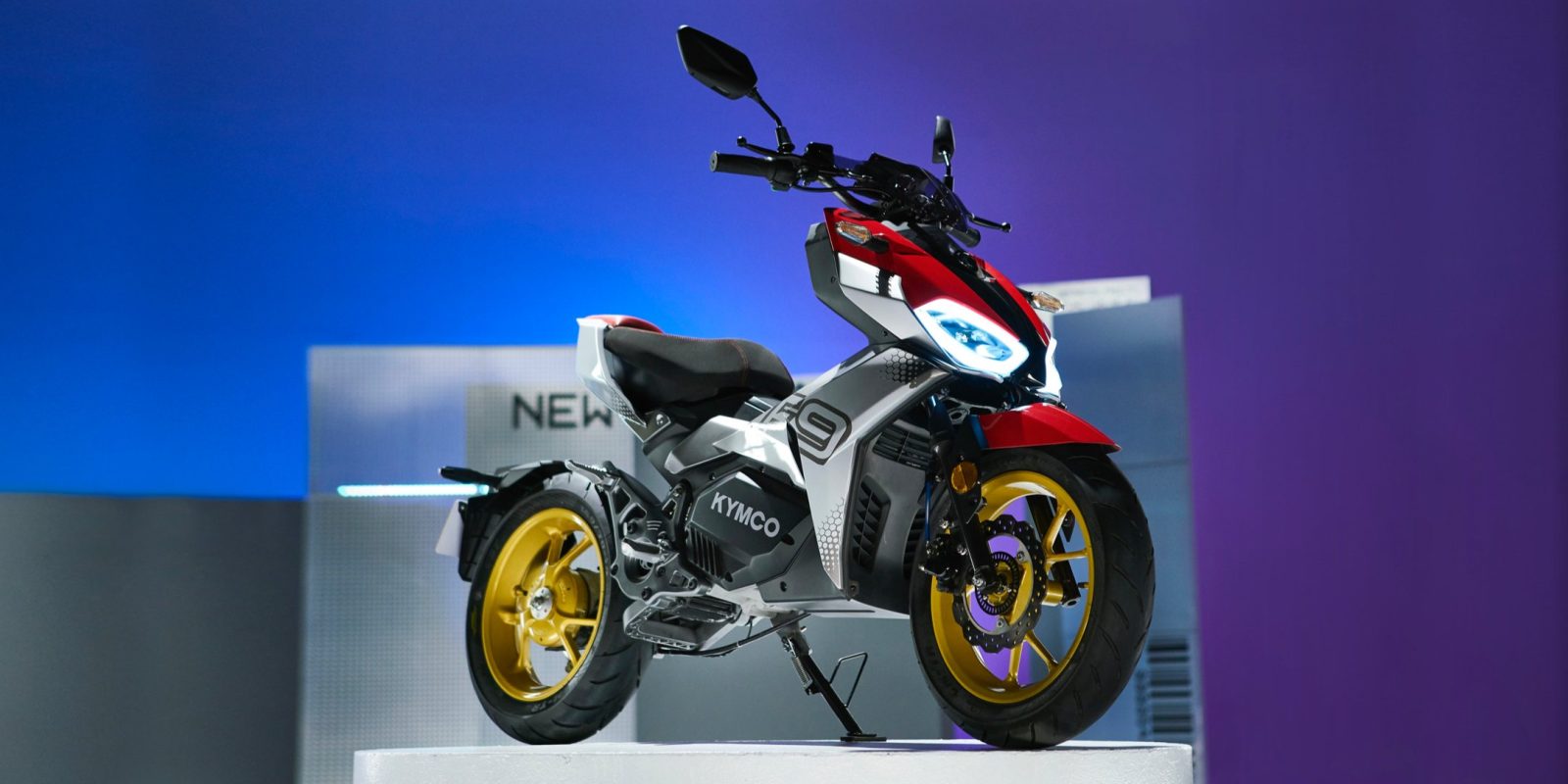 KYMCO Chairman Allen Ko described the F9 upon its unveiling as “A cool urban electric motorcycle equipped with a 9.4 kW electric motor and designed for street sport riding.”

That may all be true, though it definitely takes on more of a scooter format when you see it in the images below.

Semantics aside (and yes, scooters are technically a type of motorcycle), the KYMCO F9 is one of the more aggressive-looking electric scooters we’ve laid eyes on in quite some time.

With a top speed of 110 km/h (68 mph), this isn’t just an urban electric scooter either. It’s fast enough to hit highways on occasion, even if that’s not its main purpose.

The 9.4 kW motor is listed as producing 30 Nm of torque, but that’s at the output shaft. Most manufacturers provide the larger rear-wheel torque number and there’s no word yet from KYMCO on that figure.

The 96V and 40Ah battery pack offers 3.84kWh of capacity, or roughly equivalent to an entry-level Zero FX or FXS electric motorcycle. That 17 kg (37 lb) non-removable battery is sufficient for 120 km (75 miles) of range based on the New European Driving Cycle. KYMCO even claims it can be fast-charged in just 2 hours.

But perhaps the most interesting aspect of the new KYMCO F9 is its transmission.

Eschewing the typical single-speed direct transmission found in nearly all other electric scooters and most electric motorcycles, KYMCO decided to include a 2-speed automatic transmission in the F9.

That should allow for torquier starts and a shorter 0-60 mph time, though KYMCO only published the 0-50 km/h (0-31 mph), which it clocks at 3 seconds.

The unique design of the F9’s chassis incorporates the battery as a stressed member, bringing the weight down to 107 kg (235 lb).

The bike also includes 14-inch tires with “high cornering grip”, which the company claims should make the F9 “an extremely fun-to-ride motorcycle.”

On the one hand, color me impressed. Electric scooters aren’t known for looking sexy or aggressive. But I’d say that the KYMCO F9 is a step in the right direction on both fronts.

It’s hard to gauge this for sure, but the scooter does appear to be a bit on the small side, especially since KYMCO isn’t known for using particularly large models.

Either way, I think they did a great job with the design.

On the other hand, I would have loved to hear some announcement about actually bringing the company’s other two electric motorcycles to production. Two years ago we first laid eyes on the KYMCO SuperNEX, followed last year by the KYMCO RevoNEX. Both bikes look like something I’d want to hop on today, but neither is in production nor has any estimated date for production. Why can’t we have one of those, and will the F9 remain in non-production purgatory like its older brothers, or will it see the light of day?

I think the F9 has the best chance of actually making it into dealerships considering it features a much smaller battery and motor, plus it looks much more producible using current KYMCO resources.

Lastly, let’s talk about that 2-speed automatic transmission for a second. I can’t really judge it until I try it, but assuming it works well, that could be a major innovation. I generally think manual gearboxes on electric motorcycles are overkill, but an automatic 2-speed gearbox could be a nice compromise between complexity and performance gains.

So come on, KYMCO. You’re all lined up for a home run here. Now we really need you to connect and send this one soaring.