KYMCO teased us last week about the company’s upcoming electric maxiscooter called the RevoNEX, but then pulled the best bait and switch ever. It turns out the KYMCO RevoNEX is no maxiscooter – instead, it’s an awesome high power electric motorcycle.

And you’ve seriously got to see this…

To be fair, the KYMCO RevoNEX doesn’t have quite as impressive high power specs as the SuperNEX. But if its spec sheet is to be believed, it can hold its own against many other electric motorcycles on the market today.

KYMCO hasn’t shared any info on the battery or motor with us yet, so we can’t estimate the range or give an accurate power figure, unfortunately. But you don’t get from 0-100 km/h in under four seconds with a paltry scooter motor, that’s for sure.

And speaking of acceleration, that’s aided by the 6-speed manual gearbox found in the RevoNEX.

Check out our video from the unveiling of the KYMCO RevoNEX below.

Since the launch of the SuperNEX last year, KYMCO has maintained the mantra that “shifting is the art of motorbike riding”. And this year sees KYMCO sticking to its guns as the RevoNEX inherits a manual gearbox just like the SuperNEX.

But that doesn’t mean riders will be left with annoying shifting in city traffic. First gear on the KYMCO RevoNEX is apparently sufficient for speeds up to 80 km/h (50 mph).

The RevoNEX also features KYMCO’s launch control, which helps riders make a perfect launch each time, taking care of traction control and other rider aides to help the rider focus purely on the ride.

Don’t expect to put down a deposit for a RevoNEX anytime soon though. KYMCO says it won’t be available until 2021. 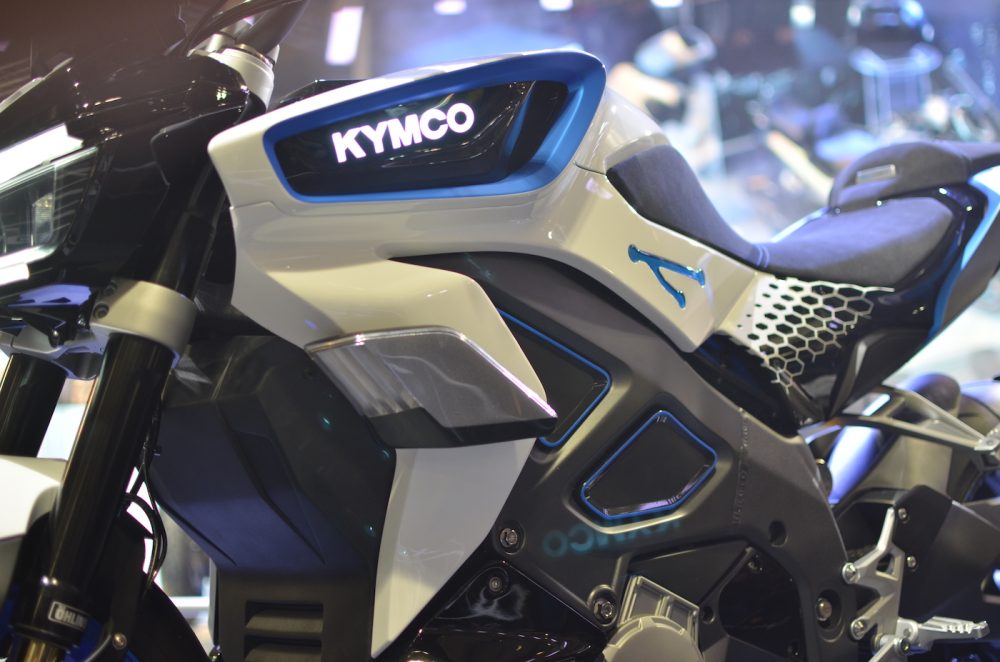 Well, it’s a nice looking bike, I have to hand it to KYMCO. For a scooter company, they’ve designed some pretty aggressive electric motorcycles.

The SuperNEX was a bit over the top in the performance department and I still wonder if they’ll ever be able to bring it to market, but the RevoNEX seems like a much more attainable goal. They say if you’re going to shoot for the stars, aim for the lowest one. I’m not sure this is the lowest star, considering it has still got some lofty specs, but it seems more within the wheelhouse of a company like KYMCO.

Though I’m not sure the execs at Zero or Lightning need to start worrying just yet. KYMCO has been very good at two things lately: Announcing awesome new electric two-wheelers, and not bringing those two-wheelers to market very quickly.

KYMCO Ionex and Ionex Commercial have shown off some very nice electric scooters, but all indications are that sales aren’t incredibly strong. KYMCO Chairman Allen Ko tells me that they’ll have announcements on that front soon, but there’s still not much to be said yet. And there’s the SuperNEX of course, which I don’t know if I’ll ever be able to sit on, much less purchase. So don’t get me wrong, I want to see RevoNEXs whizzing around all over the place. But I’ll believe it when I see it.

KYMCO showed off an awesome bike today. But I’m withholding judgment until it’s no longer a concept vehicle.