Climate Crisis Weekly: What’s with all the hurricanes in 2020? 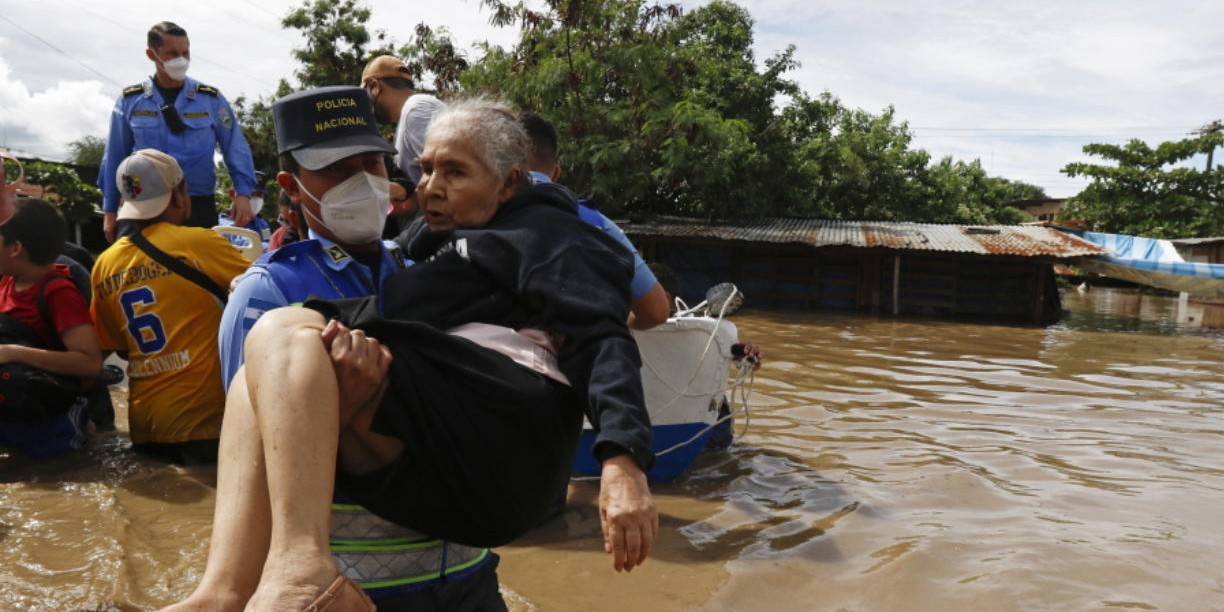 Greetings from a post-Tropical Storm Eta in St. Petersburg, Florida. On Wednesday, the Tampa Bay region had numerous tornado warnings, we got a lot of heavy rain and high winds Wednesday night into Thursday morning, and thousands of people lost power and are cleaning up flooded houses, cars, and debris. This tropical storm came very late in the season, and had it come just a month ago, it could have been much worse due to even warmer Gulf of Mexico temperatures.

Eta first devastated Central America (Honduras is pictured above) as a Category 4 hurricane, drunkenly meandered around the Gulf of Mexico for days, flooded South Florida, caused the worst flooding in 50 years in Tabasco, Mexico, and then quickly veered east and caught us and the National Hurricane Center by surprise in just hours. Our local meteorologist said he’d never seen anything like it.

In August, Electrek wrote about Hurricane Laura, and how its wind speed doubled in 24 hours, going from sustained winds of up to 95 mph to winds of 156 mph as it approached Texas and Louisiana. In October, Electrek wrote about how Hurricane Delta — because we moved into the Greek alphabet as we’d run out of alphabetical names — was the 25th named storm of 2020 and the 10th to hit the US this year. Five named storms struck Louisiana this year.

The 2020 Atlantic hurricane season has broken the record for the number of named storms, according to the US National Hurricane Center. As Grist writes, “25 of the 28 named storms that occurred before Theta were the earliest named storms for their position in the alphabet — and then the Greek alphabet —on record.”

As of last night at 10 p.m. Eastern, we reached 30 named storms with Iota. It’s expected to strengthen steadily and gain speed, and looks to deliver yet another huge blow as a major hurricane to Central America.

So, why have there been so many the hurricanes this year? (Yeah, we know 2020 stinks, but the scientific reason.) The short answer is warmer waters, a strong African monsoon season, and reduced wind shear. As the New York Times points out:

The increased frequency of tropical storms and hurricanes, they said, is not a result of climate change, though climate change can produce more ferocious storms and has led to a rise in sea levels, which can amplify the devastation from flooding and storm surge.

So climate change is playing a big part in intensity and rising sea levels in storms.

On Wednesday, scientists from the Okinawa Institute of Science and Technology published a new study in Nature that concluded:

Hurricanes that develop over warmer oceans carry more moisture and therefore stay stronger for longer after hitting land. This means that in the future, as the world continues to warm, hurricanes are more likely to reach communities farther inland and be more destructive.

The implications are very important, especially when considering policies that are put in place to cope with global warming.

We know that coastal areas need to ready themselves for more intense hurricanes, but inland communities, who may not have the know-how or infrastructure to cope with such intense winds or heavy rainfall, also need to be prepared.

So, the bottom line is that climate change may not cause hurricanes to punch more frequently, but they’re punching harder. Those of us on the Atlantic are very much looking forward to the end of the season in a couple of weeks. Hopefully.

Now let’s talk about some good news. The 2020 election wasn’t just about the presidency and Congress; there were also some very important propositions and ballot measures that the US voted on. The Natural Resources Defense Council kept track of wins on this front, and here are three of a number of environmental triumphs around the US [via the NRDC]:

Nevada Question 6: Renewable Energy Standards Initiative. This will amend the state constitution to require Nevada’s electric utilities to acquire 50% of their electricity from renewable resources by 2030.

Michigan Proposal 1: Use of State and Local Park Funds Amendment. This will free up more funding for the renovation, maintenance, and operations of state parks, and also remove a cap on the size of Michigan’s natural resources trust fund.

Colorado Proposition 114: Gray Wolf Reintroduction Initiative. This will reintroduce to Colorado a population of endangered gray wolves that became extinct in the state nearly 80 years ago. The absence of this predator, and its role as a keystone species, has disrupted the natural order of some of the state’s ecosystems.

Kiss the Ground, a documentary directed by Joshua Tickell and Rebecca Harrell Tickell, was released on Netflix in September. It’s narrated by actor Woody Harrelson, with comments from other well-known climate activists/actors such as Patricia Arquette and Ian Somerhalder. It makes a compelling argument that soil’s capacity to sequester carbon could be a formidable weapon to combat climate change.

The problem with current agriculture practices, the film asserts, is tilling and pesticides. And the solution is regenerative farming. That means minimal tilling and improving soil fertility with cover crops, crop rotations, compost, well-managed grazing, and animal manures. You can read more about it here, on Regeneration International’s website.

“But this film was released in September!” you say. “Why are you writing about it now?” (Well, have you watched it yet? No? Then watch it. Yes? Tell us what you thought about it below.)

But the answer to that question is because now there’s a chance to actually do something about it in the US, which is going to re-enter the Paris Agreement, among other things, and start to take definitive action on climate change, in some form or another. Have a watch of Kiss the Ground‘s trailer below:

Here are this week’s #FridaysForFuture protests, which has implemented a #ClimateStrikeOnline in order to stay safe as coronavirus cases surge:

Yoshiro from Japan, 16, is on her 16th week on climate strikes:

Elizabeth Wathuti weighs in from Kenya:

And from Iowa City, Iowa, a call for President-elect Joe Biden to implement a US climate-change plan: