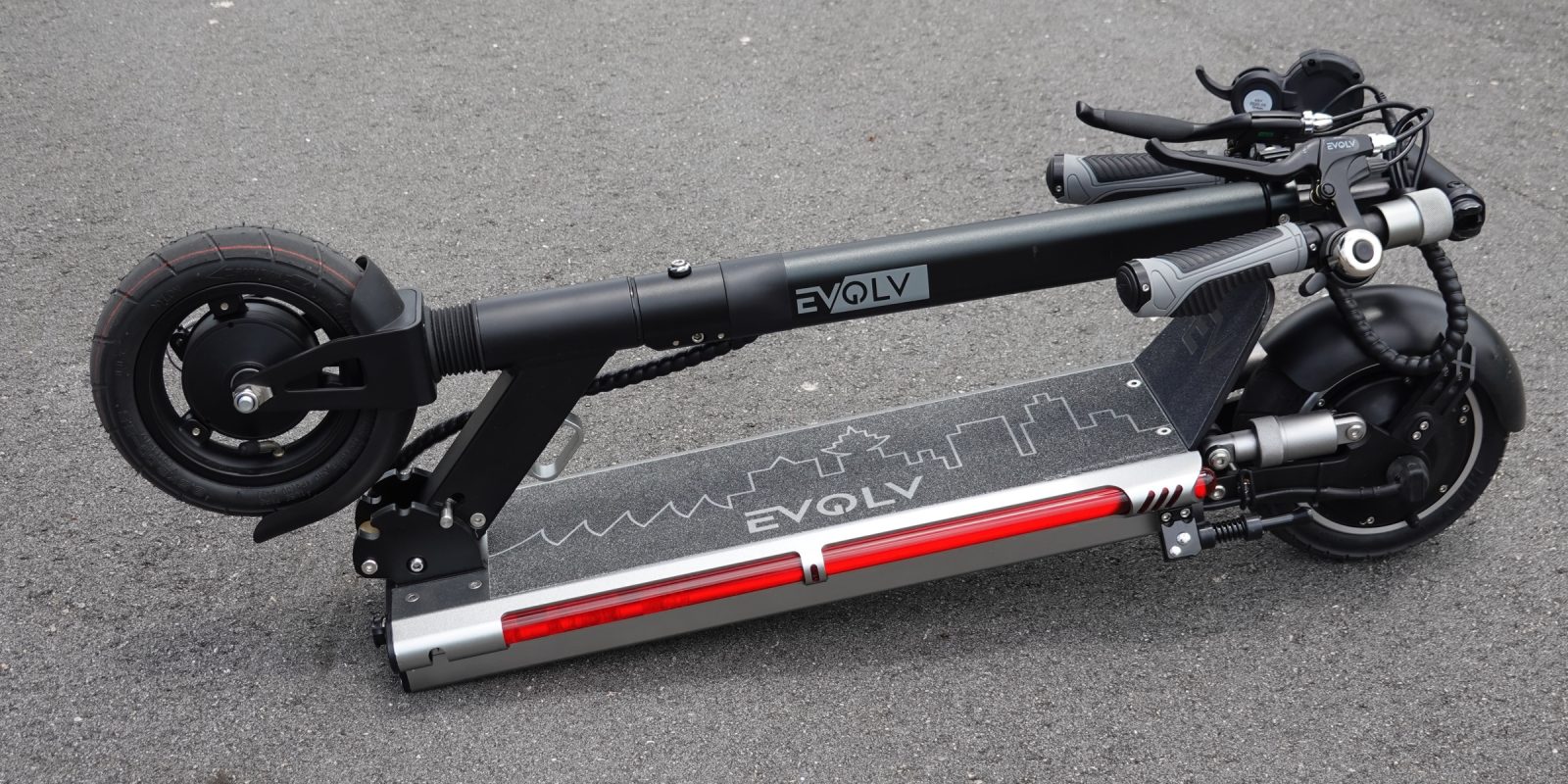 What happens when you combine a well-built and fast electric scooter with the service and support of a Canadian company? You get the awesome little EVOLV Tour 2.0 electric scooter from Urban Machina.

It’s a powerful little commuter scooter with full suspension and backed by a company that is as polite and professional as they come. Good service and a good scooter – what’s not to like?!

Oh yea, and stick around because we’ve got a $100 off coupon code for you below!

To see this electric scooter in action, watch my video review below. Then keep reading for all of the details that separate the EVOLV Tour 2.0 from the rest of the pack.

How does the EVOLV Tour 2.0 e-scooter ride?

But the EVOLV Tour 2.0 still manages to hang with the faster and higher speed scooters, despite its distinctly middle-of-the-road weight class.

The scooter’s top speed of 28 mph (45 km/h) is fast enough for nearly any urban commute. At those speeds, you can feel safer moving in the lane instead of being passed on the side of the road.

The 8.5-in tires aren’t huge, mind you. So you’re still going to want to be hyper-vigilant about scanning for potholes or other road irregularities.

But the scooter does feature both front and rear suspension, which combine with the air-filled tires to give a great ride.

So as long as you don’t hit something large enough to swallow up your wheels, you’ll find the ride is much better than most scooters of this size.

When it comes to strong acceleration or climbing hills, the EVOLV Tour 2.0’s 1,200W peak-rated motor has you covered. It may only offer 600W of continuous power (as if that wasn’t already a fair amount!), but the 1,200W peak power is what you feel when you grab that throttle hard.

And with a large 624Wh battery, you’re not likely to get stranded unless you find yourself commuting more than around 25 miles (40 km) in a day.

To put that into perspective, a battery of this size is standard on full-size electric bicycles — and is about twice the size of what you’ll find on most electric scooters. So you can rest assured knowing that you’re packing enough battery to ride for days, assuming your trips average around 6-10 miles per day like many of us.

One of my favorite features of the scooter isn’t the powerful motor or the large battery though, it’s the pair of strong drum brakes. Some people think of drum brakes as older technology — and it is. But it’s also the best scooter brake, in my opinion. It works regardless of the weather (unlike rim and disc brakes that fade when wet) and is nearly maintenance-free. The sealed brakes almost never need adjusting, and many will outlive the scooters they are installed on.

Ultimately, the EVOLV Tour 2.0 pretty much ticks all my boxes for what I want in an electric scooter. It’s not perfect, of course. I’m not a huge fan of the folding mechanism using a loop that needs to be pulled with the hand, instead of the more common foot lever. That means I now have to bend over to fold the scooter instead of just using my toes.

The scooter also has some features that I never really used, such as the large rear kick platform. It doesn’t take anything away from the scooter though and might be nice for some people who like to press against something in the back. That’s not really for me, but otherwise, the scooter has pretty much everything I look for.

Which of course brings me to the price. The EVOLV Tour 2.0 electric scooter is priced at around US$1,150 (or CAD$1,499). Why the Canadian dollars, eh? The retailer Urban Machina is based in Vancouver, Canada. But don’t worry, they ship to both the US and Canada for FREE!

And if you want to take $100 off of your own EVOLV Tour 2.0 electric scooter, you can use our discount code ELECTREK. That brings the price pretty darn close to an even US$1,000, which is a pretty good deal for a scooter with this level of performance. It even looks pretty cool too with that mechanical colorway and dual red acrylic tubes running back to the taillights.

There will always be more affordable budget-level scooters out there. But this one goes twice as fast, twice as far, and has three-times the power.