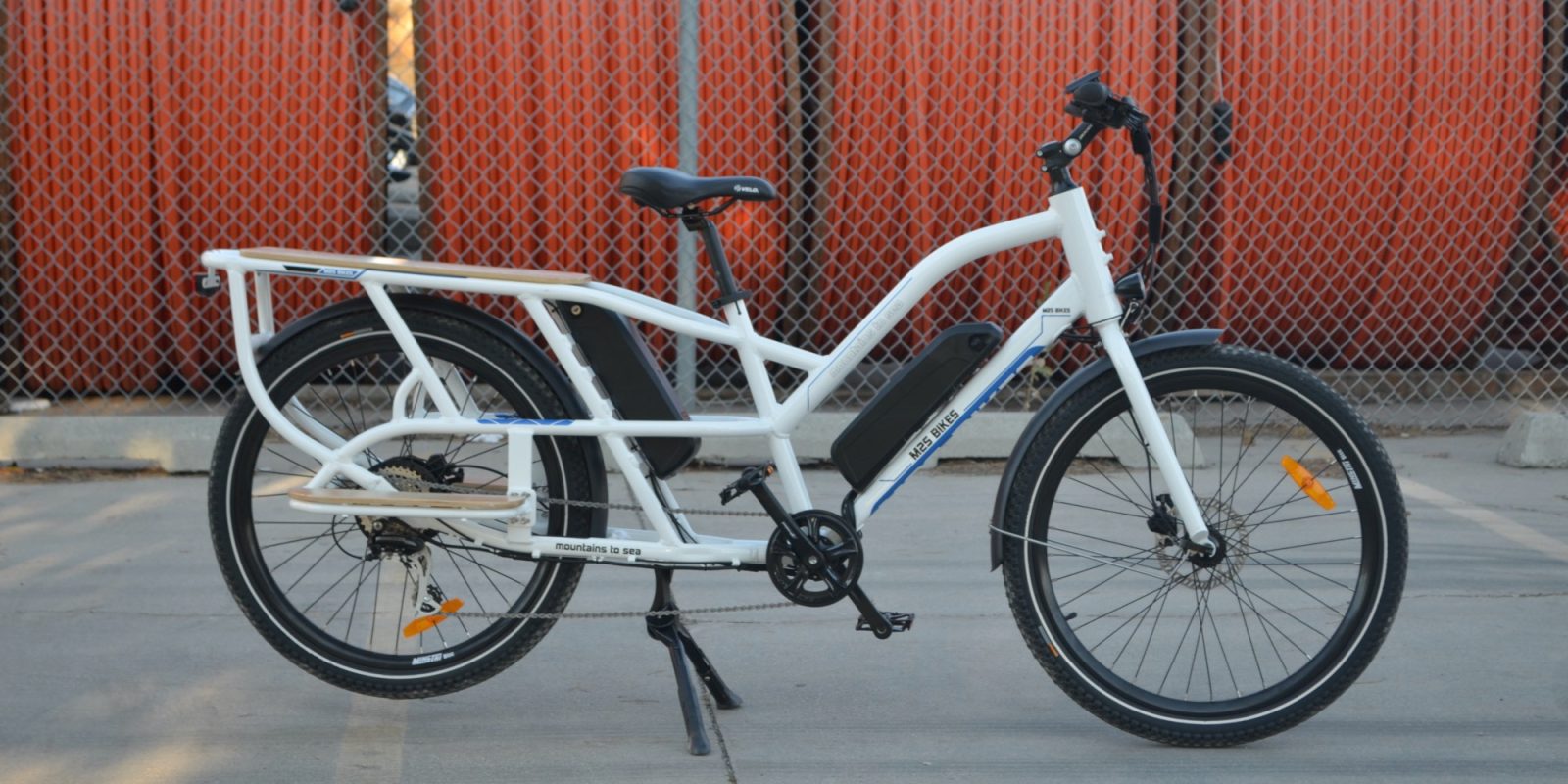 M2S, an internet order electric bike company, enters the cargo fray with the All-Go Cargo, a dual battery long-tail cargo bike. The popular long tail is the most conventional, versatile, and easy cargo bike to live with. And M2S plays it safe with the most popular accessories and a very stout design.

M2S has made a name for themselves with budget-minded bikes, normally suited for off-road adventure. We’ve reviewed some in the past and found them to be good performers in their category. M2S isn’t going to win design awards for efficiency or state-of-the-art tech, but its down to business bikes are a safe pick for anyone looking to explore a bit more.

And you certainly can! The dual battery system on the All-Go makes it very easy to commit to a longer ride or a heavier load. Most other dual battery cargo bikes (such as the Tern GSD) use higher shelf components and parts, driving up the cost of the bike to well more than double what we see here. I hesitate to call the All-Go a “budget” bike, but it is significantly cheaper than other long-range options.

First up, let’s talk about the cargo capacity. The bike is listed as capable of carrying 350lbs. I don’t know the first thing about strength testing bicycles, but I’d be willing to try out more than that. Why? The spokes in the rear are nice and strong, there is a lot of metal on the frame, and I’ve seen smaller bikes with higher ratings. The rear deck is pretty big and can hold objects big and small strapped to all that extra metal.

If you’re comfortable with it, the bike can carry quite a bit of cargo. One great cargo aspect is the dual battery system that M2S is using. The bike sports two 48v 11.6ah batteries, making a combined total of nearly 1113.6 wh of energy. Without cargo, this would take me about 40 miles using only the throttle. For those who may use this bike for work every day, there’s a chance (just speculation) that M2S would have a larger battery at some point in the future.

As a bike for work, the All-Go is pretty durable. The ride is very stable under load and, despite the slight step-through frame, I found the ride to be very reliable. Utilizing the adjustable stem, I prefer the rider weight a bit pushed forward to more evenly distribute heavy loads. For the most part, I enjoyed the 160mm hydraulic disc brakes, but I would prefer the discs to be a bit larger when I’m carrying fast and heavy loads. Using the motor to get a bit of momentum, I was able to carry very heavy loads without issue.

The next core use for the bike is carrying kids. As it stands, the bike can carry bigger kids, maybe around age 5 and older. The smaller kids will have a tough time reaching the footboards, and if you’re looking to attach a kid seat, you’ll need an adapter. The All-Go is a newer bike on the M2S line-up, and they are in the process of building an accessory line for the bike. M2S sent me an adapter for a Yepp Kids Seat, but unfortunately, the sample wasn’t ready for prime time. Lucky for me, the kid rails are ready. These fit great, and they make a huge difference. I hope M2S makes a set of wheel skirts to shield kids from putting their feet in the spokes. Right now I’m using an aftermarket pad for the kids to sit on. It’s not a perfect fit, but it works.

I should say a bit about refinement, or lack thereof. M2S is perfectly capable of making a more refined bike, but I understand that cuts need to be made to get the right price of $1,999. The throttle really makes up for the lack of pedaling comfort. The Shimano Acera is alright, but when carrying cargo, I sometimes wished the derailer was more robust. The gear selection is somewhat limited, and the cadence pedal assist is a bit dated. Why I don’t care about these is because I see the all-go as a down-to-business work truck. I would beat this down with heavy use.

The dual battery setup is a great way to differentiate the All-Go from the competition. Without that, it’s kind of lost in the fray. With the ability to carry higher loads for longer periods, the All-Go is more equipped to replace a car. During testing, I crammed Sweet Pea and her three friends on the back and went to the park — a task that would otherwise require a mini-van. If this sounds like a solution for you and your family, then the All-Go is worth a look. The accessory line isn’t priced yet, but with the dual battery, wooden foot-rails, and deck, the bike is priced at $1,999. A competitive price given the equipment.