Cargo e-bikes carrying 100s of kilos? There’s a new safety standard for that! 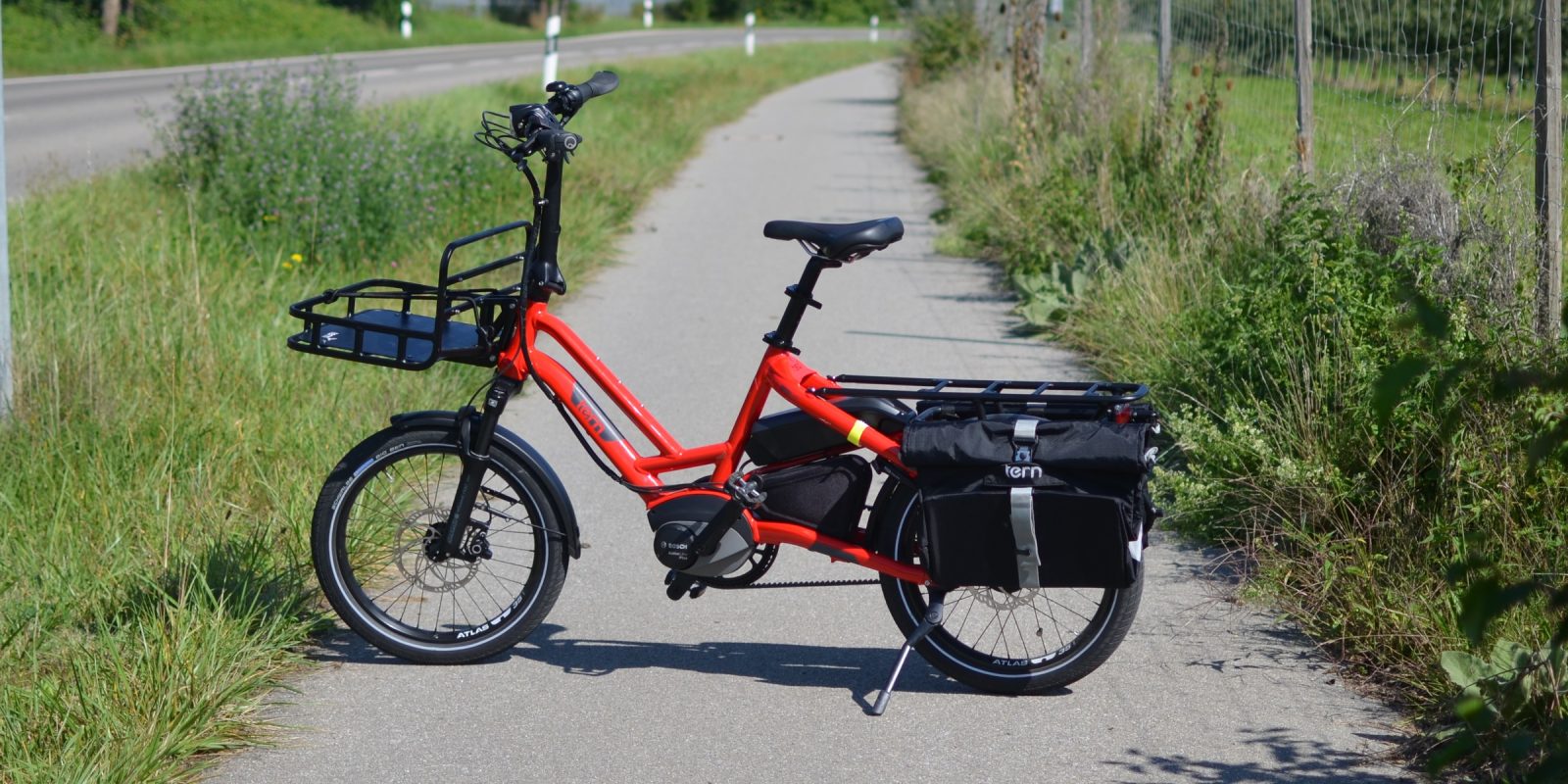 Cargo e-bikes are quickly becoming convenient solutions for moving goods around cities, but the heavily-loaded bikes haven’t previously been the subject of specific safety standards. Now a new German standard has been established and Tern’s popular GSD and HSD cargo e-bikes are the first to meet and exceed the standard.

Despite their popularity in Europe and much of the world, cargo bikes haven’t previously been included in international safety standards designed for other styles of bikes, such as those for city riding, trekking, mountain, and racing bikes.

They also aren’t included in the EN 15194 standard for electric bicycles.

But now a new safety standard is seeking to correct that.

The German standard comes with a super easy to remember title of “DIN 79010:2020-02 Cycles – Transportation bikes and cargo bikes” and hopes to be adopted more broadly across Europe after first taking effect earlier this year in Germany. 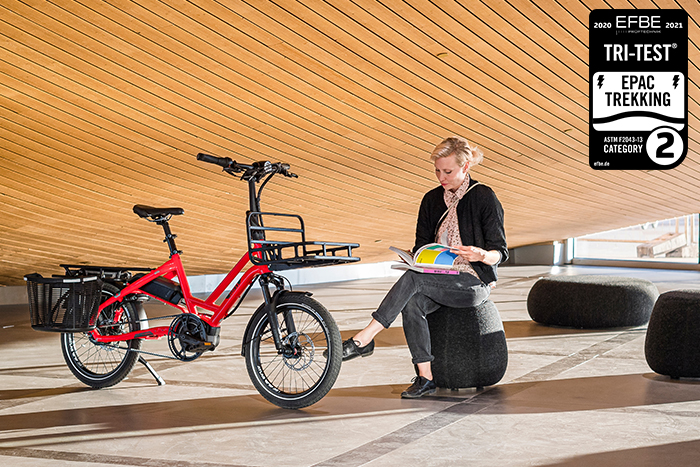 The standard is designed for cargo bicycles and covers both electric and non-electric cargo bikes at various weight ratings.

The tests in the German standard are designed to push bikes past their load ratings in a number of ways to ensure that they can withstand peak loads beyond their rated maximums.

The standard features 10 unique frame stress tests. The same frame must be used for each consecutive test – no frame swaps allowed. That means the same frame must pass all 10 tests, and ensures that any damage caused by one test would carry over into the remaining tests. 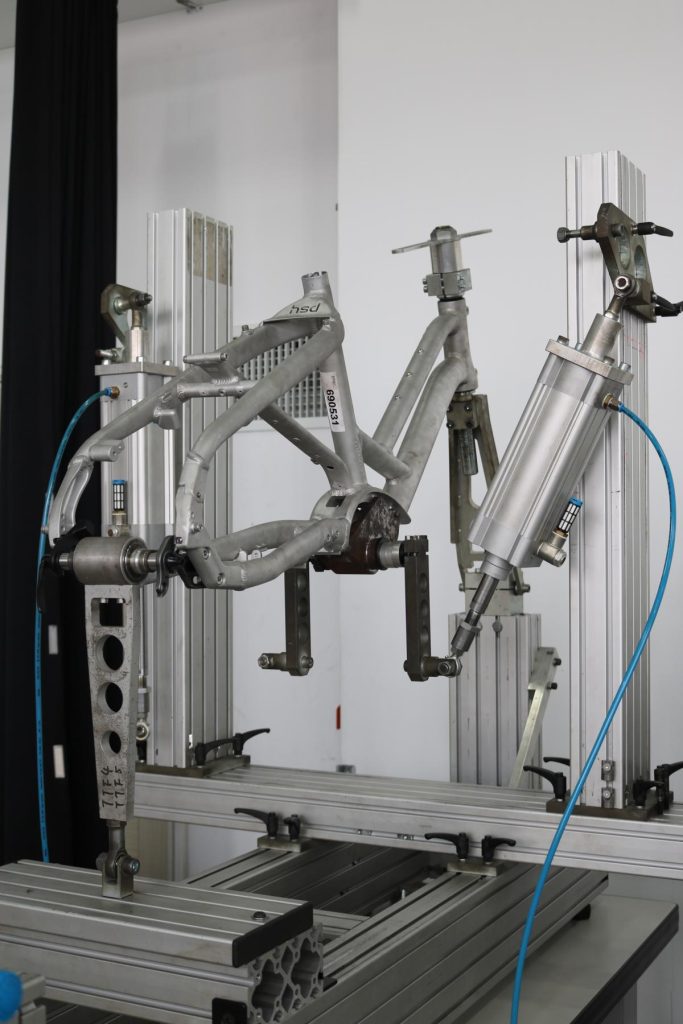 For example, during the Tern GSD’s testing, some of the tests on frame and fork used loads that were more than 300% higher than specified in the European EN 14764 standard for city/trekking bikes.

Both the Tern GSD and HSD passed the new German standard test up to their claimed maximum loads of 200 kg (440 lb) for the GSD and 170 kg (374 lb) for the HSD, which means they meet and exceed the German cargo bike standard.

As the Director of EFBE Prüftechnik and one of the main authors of the new standard, Marcus Schröder, explained in a statement provided to Electrek:

“We see a lot of cargo bikes out there that clearly wouldn’t pass more extensive testing, and that is quite worrying. Having well-defined testing standards is not only important to ensure riders have the peace of mind they need when carrying their kids on the bike, but also to push manufacturers to follow what should be basic safety requirements. We’re glad to see companies like Tern using lab-testing to identify weaknesses in their designs.”

Tern’s Team Captain Josh Hon (Seen below giving me a ride around on his Tern GSD at Interbike Reno 2018) further expanded on the importance of unique testing for heavily-loaded cargo bikes:

“Bicycle design is changing quickly and when you add passengers and cargo and electric motors, the forces at play escalate quickly. It’s really important that safety and testing standards evolve to cover these new types of bicycles. In quite a few cases, there hasn’t been a relevant testing standard for a component we’ve wanted to test and we’re really happy to have EFBE as a partner to help us design the testing standards to ensure safety for our customers.” 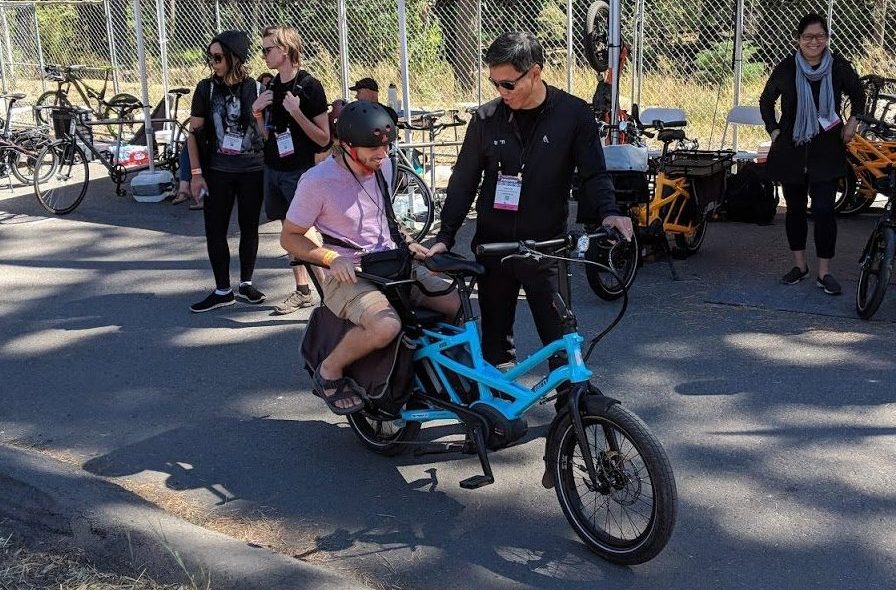 Both the Tern GSD and HSD are designed for hauling large loads, despite their rather compact appearance.

We’ve tested both, but spent extra time on the more affordably priced HSD at Eurobike last year. The HSD starts just north of US$3,000, while the higher spec’d GSD, which also features a heavier load rating, will run you around a thousand bucks extra.

Check out our full review of the HSD, and see our first ride video of the bike below.