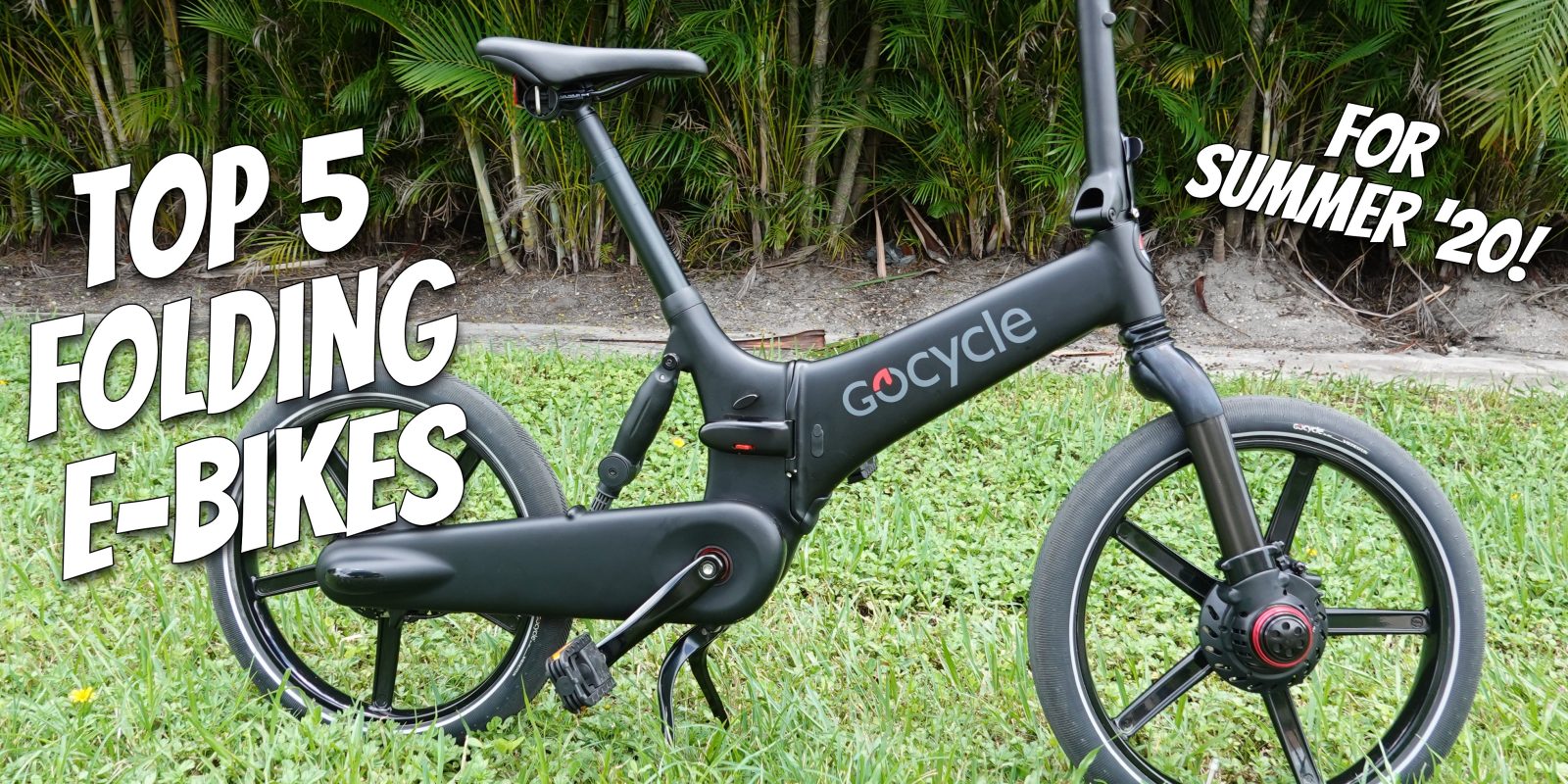 If you want an e-bike that is easy to stow away in tight spaces, then there’s no better option than a folding e-bike. Fortunately for you, there are a ton of great choices out there.

This is part of a Top 5 e-bikes for summer 2020 series that we’re currently running to help introduce our readers to some great e-bikes for hitting the road or trail this summer.

Check out the different installments of the series below:

And be sure to check out our video below that showcases all of the awesome folding electric bikes from this list in action.

First on the list is one of the biggest breakout successes of the year — the $899 Lectric XP.

I left this one off of the Top 5 fat tire e-bike list because I specifically wanted to include it on this list of the Top 5 folding e-bikes, and our readers/viewers freaked out when it wasn’t on the list. So relax everyone, here you go — the Lectric XP is finally here!

So why are people so cultishly loyal to this e-bike?

For two reasons, 1) it’s ridiculously affordable at just $899, and 2) it’s a pretty good bike. Not incredible (which you probably guessed from the low price), but pretty darn good considering.

For that price, you get a 500W continuous rear motor, a 500 Wh battery enclosed in the frame, a top speed of up to 28 mph (45 km/h), and the bike even comes wearing those nice fat tires.

This isn’t a fancy e-bike by any stretch of the imagination, but it is an awesome e-bike because it gives you everything you need to have a blast on a fun fat tire bike, yet it also folds up into something you could easily fit in the trunk of your car.

It’s fast, it’s fun, it’s a decent ride even without suspension thanks to those fat tires. It’s just a super enjoyable e-bike that works well and is ultra-affordable. This has been the first e-bike for thousands of people and it has opened up an entire world of e-biking to them.

If you’ve never ridden an e-bike before and want a bike to get you started, this would be a great option.

If you want to see even more details about the Lectric XP, check out my in-depth Lectric XP review here or watch my review video below.

Next up on the list is the Fiido D11.

This is a brand new e-bike that launched barely a month ago. It is currently crowdfunding on Indiegogo, but before you let that scare you, consider this.

Fiido is a well-respected company that has delivered thousands of e-bikes already. They aren’t some fly-by-night operation. So this one is a pretty safe bet as far as Indiegogo campaigns go.

The Fiido D11 features a 250W motor in the rear and a 418 Wh battery cleverly concealed in the seat post.

The bike isn’t terribly fast, topping out at 15.5 mph (25 km/h), but it works on both throttle and pedal assist, and it gets great range due to the limited top speed. That range works out to somewhere between 25-50 miles (40-80 km), depending on whether you use throttle or pedal assist.

There aren’t any fenders on the model I tested, but enough people backed the Indiegogo campaign to unlock the fender perk, so all the bikes will be delivered with fenders.

And do you know what the best part is? The bike only costs $799 for the pre-order, marked down from the MSRP of $1,299. If this was a no-name company then I’d be a bit worried, but it’s Fiido — they make great bikes and they’ve been around long enough to trust them. So it’s a pretty cool option in my opinion.

If you want to see even more details about the Fiido D11, check out my in-depth Fiido D11 review here or watch my review video below.

GoCycle GX, an innovative folding e-bike for the city

Next up on the list, we have something that’s a bit fancier but also a bit pricier. The GoCycle GX was just updated for the 2020 model, and the bike is a great urban commuting machine.

Power comes from a 500 W motor hidden in that funky looking front hub. There are no spokes in either wheel as the bike instead opts for mag wheels, and both of the wheels are single supported. Hydraulic disc brakes bring you to a stop quickly, and there’s even suspension in the rear, which works quite well and offers up a nice, comfy ride.

There’s also a hidden throttle option via a boost button on the left handlebar.

That’s a great way to add some extra power or just save your legs if you get tired, though it will definitely cut into your range.

GoCycle also has an extensive app that serves as the dashboard display while you’re riding. The bike includes rubber mounts and the phone covers the simple battery meter that is built into the bike.

All in all, the Gocycle GX is just a slick-looking, convenient option that is great for the city. It is easy to fold, easy to use, and stays nice and clean since it has that enclosed chain that never needs to be opened. It will last for thousands of miles like that, no muss, no fuss, no grease on your pant legs.

This is a really cool e-bike, even if it is a bit pricy at $3,300. Sure, you could get 3 Lectric XP e-bikes for that, but they’ll never be as portable, reliable or nicely designed as the GoCycle GX.

So if you’ve got the cash, this is a high tech folding e-bike that is both comfortable and beautiful, two things that don’t always go together.

If you want to see even more details on the GoCycle GX, check out our in-depth 2019 GoCycle GX review here or watch the video below. And stay tuned for our upcoming review of the updated 2020 model soon here on Electrek.

Next up we have the RadMini Step-Thru. I teased this bike in one of my previous Top 5 e-bike lists, where I called it the baby brother of the RadRover, which is Rad Power Bike’s main fat bike, and that’s really what it is.

Like the RadRover, you get fat tires for riding over dirt, grass, sand, or whatever comes your way. But unlike the massive RadRover, the RadMini’s wheels are 20″ in diameter so they are small enough that when you fold the bike, it ends up being pretty darn small, especially for a fat tire bike.

It’s still a bit heavy at 68 lb (30.8 kg), but that’s because this bike is packing some good performance. The motor is a 750W unit (which is a heavy motor) and the battery is a large 672 Wh capacity pack (which is a heavy battery).

Together, they don’t do the bike any favors in the weight department. But they DO give it awesome performance.

The battery is good for around 30 miles (50 km) of range, or even more if you want to use the pedal assist often. The throttle will only get you to 20 mph (32 km/h), which is a bit slower than some competitors, but the bike is still plenty fun at its top speed and also has the benefit of a suspension fork to smooth out bumps at high speed.

Rad Power Bikes is the biggest e-bike company in the US for good reason, they make high-value bikes and the RadMini Step Thru is a great example of that. For just $1,499, you’re getting a fun, high power, and long-range fat tire bike that can fold up for easy transport.

That’s a great deal any which way you slice it!

And last but not least, I wanted to showcase a weird little folding bike known as the Swagtron EB7 Plus, but unfortunately, it seems to be perpetually sold out and I’m not sure if that means it’s ever going to be back.

And that’s a shame because it’s a great option, priced at just $699 with decent speed and even rear suspension… but since it doesn’t seem to be an option right now, it’s getting replaced by…. the Fiido L2!

I know that I featured this e-bike in the Top 5 full-suspension e-bike list, but it is just such an awesome little utility folding e-bike that I had to put it on my Top 5 folding e-bikes list too.

This sucker is not just a full-suspension e-bike, but it has a second rear seat for small passengers and a giant battery at 48V and 20Ah, or nearly 1 kWh. That’s enough for a legit 50 miles (80 km) of range, partly due to the somewhat low top speed of 15.5 mph (25 km/h).

It might not be a quick bike, but it sure is a strong one.

It claims to have a 350W motor, but the thing can pull me up a hill with only throttle and obviously packs more power than just 350W. Plus there’s no way a 48V system is being used on a measly 350W e-bike. I’d wager this is a minimum 750W peak, which would be standard for a 48V battery and 15A controller.

All in all this is a powerful little folding e-bike for barely $800 that adds some serious utility as well.

While those are my favorite folding e-bikes that I’ve tested so far, I’d love to hear what folding e-bikes you’ve enjoyed. Sound off in the comment section below to let me know!