5,400W e-scooter review: 50 MPH Wolf Warrior is the most fun you can have standing up 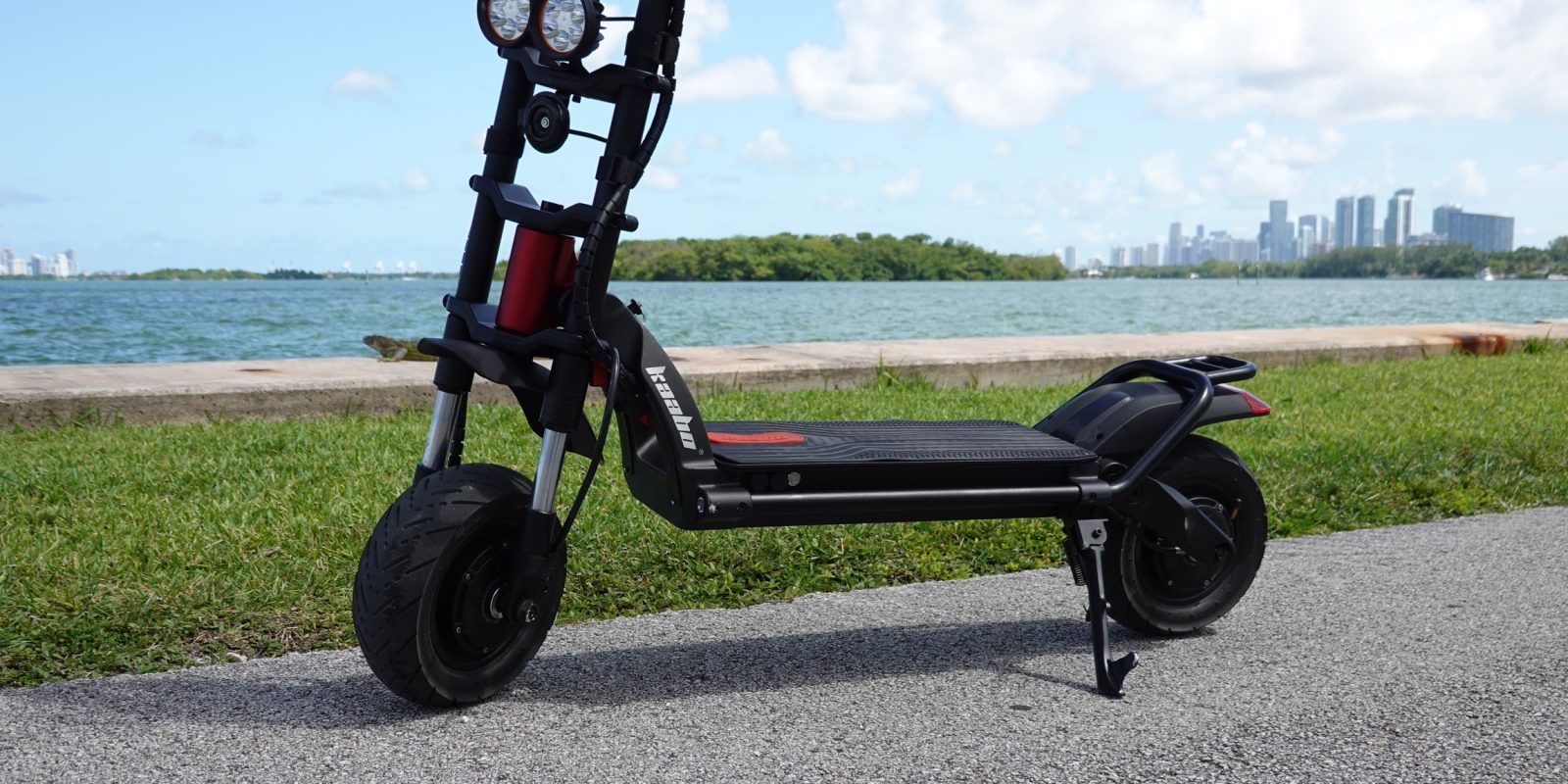 Fast electric scooters like the 5,400W Wolf Warrior from FluidFreeRide are serious machines made for serious fun. These are purpose-designed scooters that are built like a tank with the proper suspension, brakes, and other components to (relatively) safely get that power to the ground and still bring you home for dinner.

These high power electric scooters certainly aren’t toys though. Any electric scooter can be dangerous, but these types of ultra-powerful and super fast e-scooters bump the risk up a couple of notches, at least.

Please notice in the video below that I’m wearing full protective gear including my motorcycle helmet, armored jacket/pants, and riding gloves during this review (though admittedly I forgot to put gloves back on a few times while working the camera controls). I recommend the same type of protective gear for anyone who wants to enjoy the thrill of these high power scooters.

Alright, now that we’ve got that important safety notice out of the way, let’s check out the Wolf Warrior electric scooter in all its glory. You’ll definitely want to watch my video review below, then read on for all the epic details. 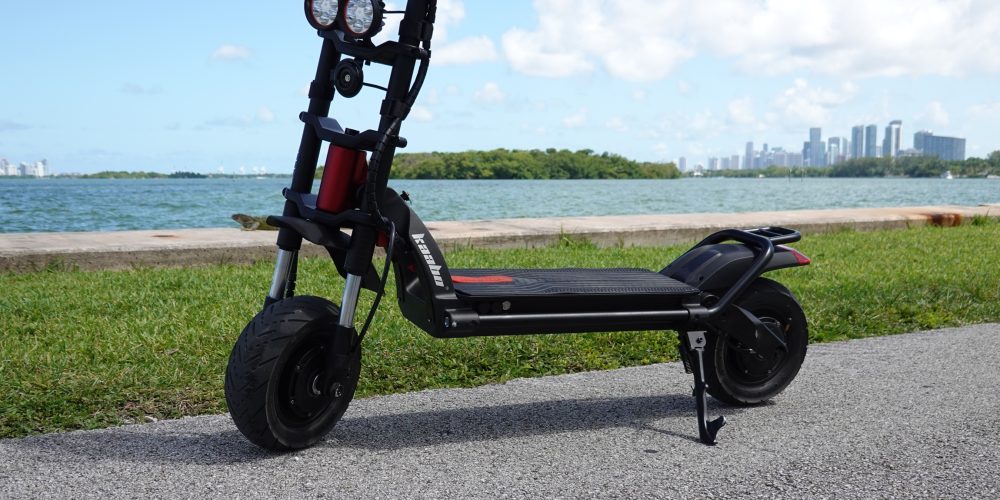 How do I ride this beast?

The Wolf Warrior 11 electric scooter comes in both an on-road and off-road version. The difference is pretty much just the tires, with street tires on one and knobbies on the other.

Even though I’m riding the street version, I took it for some fun off-roading as well, as the scooter has unique advantages that help it excel at both.

On the street, even though it has a top speed of 50 mph (80 km/h), I mostly find myself riding in the 30s and 40s mph range. That’s true of all fast electric scooters I ride. The high speed is fun and occasionally I’ll open it up wide in areas that feel safe, but the majority of the time I’m using that high power for its acceleration and hill climbing ability – not for its high speed. 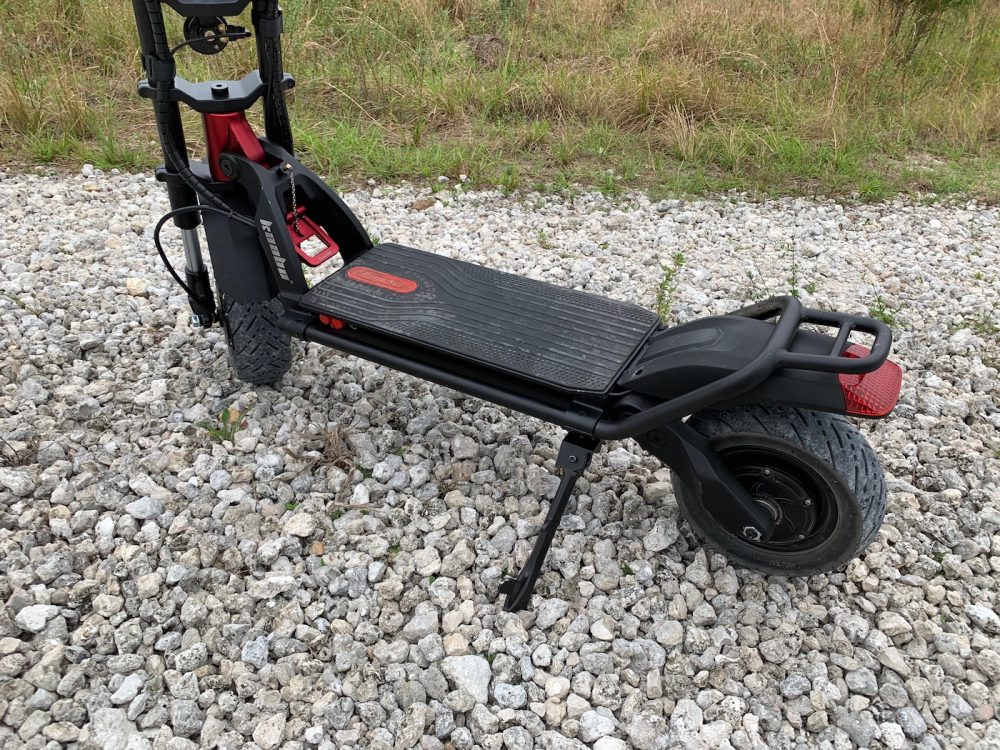 The 5.4kW of peak power divided between two wheels mean the Wolf Warrior can accelerate faster and climb harder than just about any other electric scooter on the market.

And just like how a Nissan Leaf can hit nearly 100 mph despite most drivers not needing such speeds, the Wolf Warrior’s higher top-end gives you the peace of mind that you have extra power in your pocket if you ever need it to quickly exit a sticky situation. The suspension and high ground clearance on the Wolf Warrior 11 also make it better than nearly any other scooter at handling potholes and rough roads. I honestly believe this is some of the best electric scooter suspension I’ve ever tried. It rides like a dream. In fact, you really begin to appreciate how well the suspension works when you take it off-road.

The downside is that all of this gear is heavy, to the tune of 101 lb. (46 kg). This is absolutely not a portable scooter, at least in the conventional sense. Sure, it can fold. But it’s not like you’re going to be one-handing it into the trunk of your car every morning. I have a feeling that most people that own a Wolf Warrior don’t use the folding mechanism very often. This is basically a motorcycle in a scooter’s body, and I find myself treating it like such. 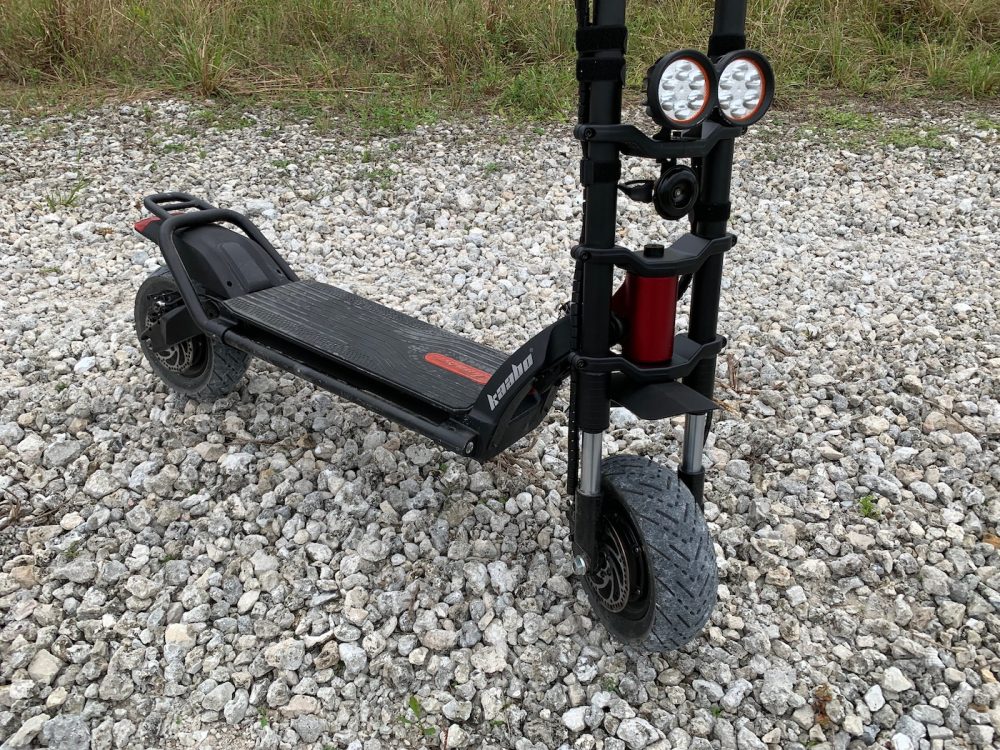 Off-road riding on the Wolf Warrior

While the commuting performance of the Wolf Warrior 11 is great, there’s no thrill quite like taking this beast off the pavement and into the dirt or gravel.

I hit some trails and then some sand to really put the scooter to the test.

Keep in mind I’m rocking nearly-slick road tires here, which is the opposite of what you want for this type of trail riding, but the Wolf Warrior 11 still did surprisingly great. Despite slipping in the sand and gravel a bit from the loss of traction on those street tires, I could hit high speeds even in loose earth.

The suspension was able to soak up everything, even riding over unforgiving rocks that would crack a Bird scooter and its rider in half!

And the high ground clearance of the scooter meant it was actually safe to ride over obstacles and hop back up on curbs once the off-roading adventure was over.

Look, this scooter is ridiculous. It’s the scooter equivalent of some crazy 4×4 rock-crawling Jeep. It’s got power for days and battery for even longer than that. A 2.1kWh battery pack?! I owned an electric motorcycle with less battery than that!

And while no one really needs a scooter like this, that hasn’t stopped thousands of people from enjoying the hell out of one.

It’s a bit pricy at its MSRP of $3,199, but you can take $400 off and grab it for $2,799 if you don’t mind waiting a few weeks for late July shipping. Just use the coupon code WOLFINJULY200. At that price, I think this is some serious value for a 50 mph and 5.4 kW electric scooter with this kind of performance.

What do you think of the Wolf Warrior 11? Let me know in the comments below!