VanMoof’s new $2,000 S3 commuter ‘smart eBike’ is a technical and design marvel but not for everyone

VanMoof, the Dutch company that specializes in very futuristic Dutch-style electric bikes has a new $2,000 S3 model that we’ve had a few weeks to take for a spin. While we marveled at a lot of the design and technology of this prototype bike, I can conclude that it isn’t for everyone, particularly if you’ve got long steep hills to conquer or want to travel above 20mph.

VanMoof S3 Out of the Box

I’m not usually an unboxing type of person but VanMoof makes a great first impression right off the bat with the care it put into the packaging. Not only is everything recyclable (even zip ties are reusable) but the bike is also protected well from dings and dents. Most importantly, it is easy to put together with its short instruction kit and convenient high-quality toolset.

If it weren’t for screwing in the motor cable cover inside the front fork through the wheel spokes, I probably would have had the bike put together in 15 minutes but that task just about doubled the install time (and I never got it seated perfectly).

As you can see, I received the powder blue matte version (it also comes in black), which I can recommend highly except for the matrix display brightness when it is sunny. VanMoof cleverly designed all of the cabling to run in the tube as well as an internal battery and subtle 250-350W front motor. Most people will look at this bike and not realize it is electric. Even the throttle and horn buttons are subtle.

I got compliments all over on the bike design. This is the most gorgeous ebike out there in my opinion. 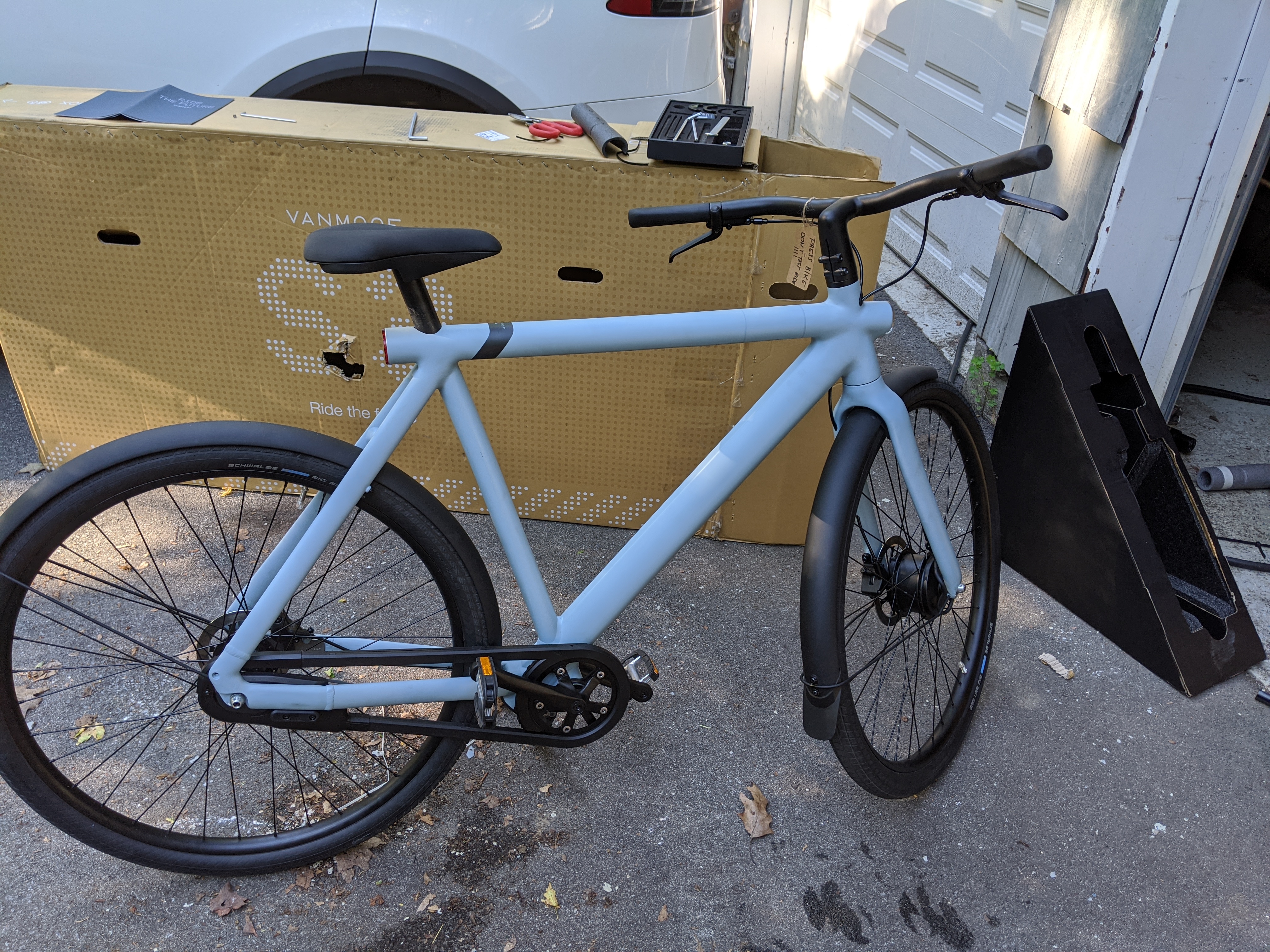 As you can see in the images above and below, the chain is completely enclosed as is the front sprocket and rear 4-speed internal gearing system. The seat height is also adjusted by a hidden proprietary screw.

I’m 5’11 or about 182cm tall and I found the top bar to be right about my ride height. VanMoof says people as small at 5’8″ and as tall as 6’8″ can ride this bike but I’d measure your inseam height before purchasing this bike if you are close to 5’8″. I think this is the tallest top bar on any ebike I’ve ridden. I’m sure in Holland, the tallest country on earth, this isn’t a huge factor.

VanMoof makes a smaller X3 for smaller people with a slightly weird geometry.

As you can see, there is no obvious or even hidden suspension on this bike so when you hit the bumps, you will feel them. My favorite road tires, the Schwalbe Big Bens here at 28-inches, will soften most of the road noise however. You’ll also notice the hydraulic disc brakes don’t have ventilation/holes punched in them.  They work really well regardless. 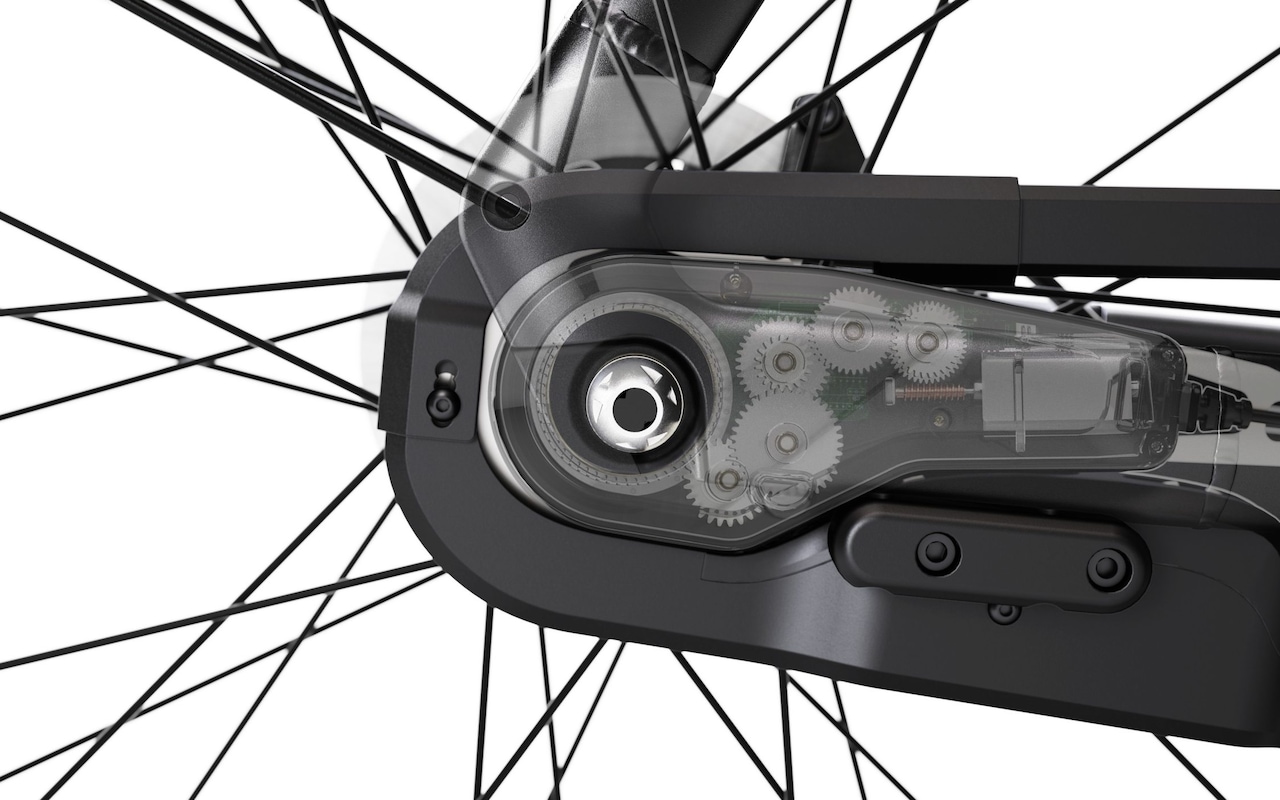 Instead of manually switching gears, VanMoof’s S3 has an automatic 4 speed. As an avid cyclist, both electric and acoustic, I’ve grown used to and like to control my own gearing. The S3 decides when you need to go up or down a whopping 4 gears. Initially, this was the worst thing ever for me but I eventually got used to and knew when to expect a gear change. There were a few times when the bike was in totally the wrong gear however, particularly going up and down hills which I’m told is a factor of the prototype software and hardware.

The VanMoof app also allows you to change gear switch speed. I tried moving these around and found that the default was as good as it was going to get.

Because of the limited number of auto gears, I wasn’t able to climb the huge hill that’s on the other side of my driveway. That’s a real shame because I’ve climbed it in my non-electric gravel bike in a serious granny gear on a number of occasions.

VanMoof calls its throttle, discreetly placed on the right handlebar near your thumb, the “boost button”. But it is just a throttle and I get the importance of a throttle when taking off from a start.

But here’s what I don’t get: even in the highest assist mode, the throttle adds significantly more power. But I’d rather have that extra oomph available to me in the pedal-assist. With this system, going up a big hill, you have to have your thumb on the throttle the whole time. 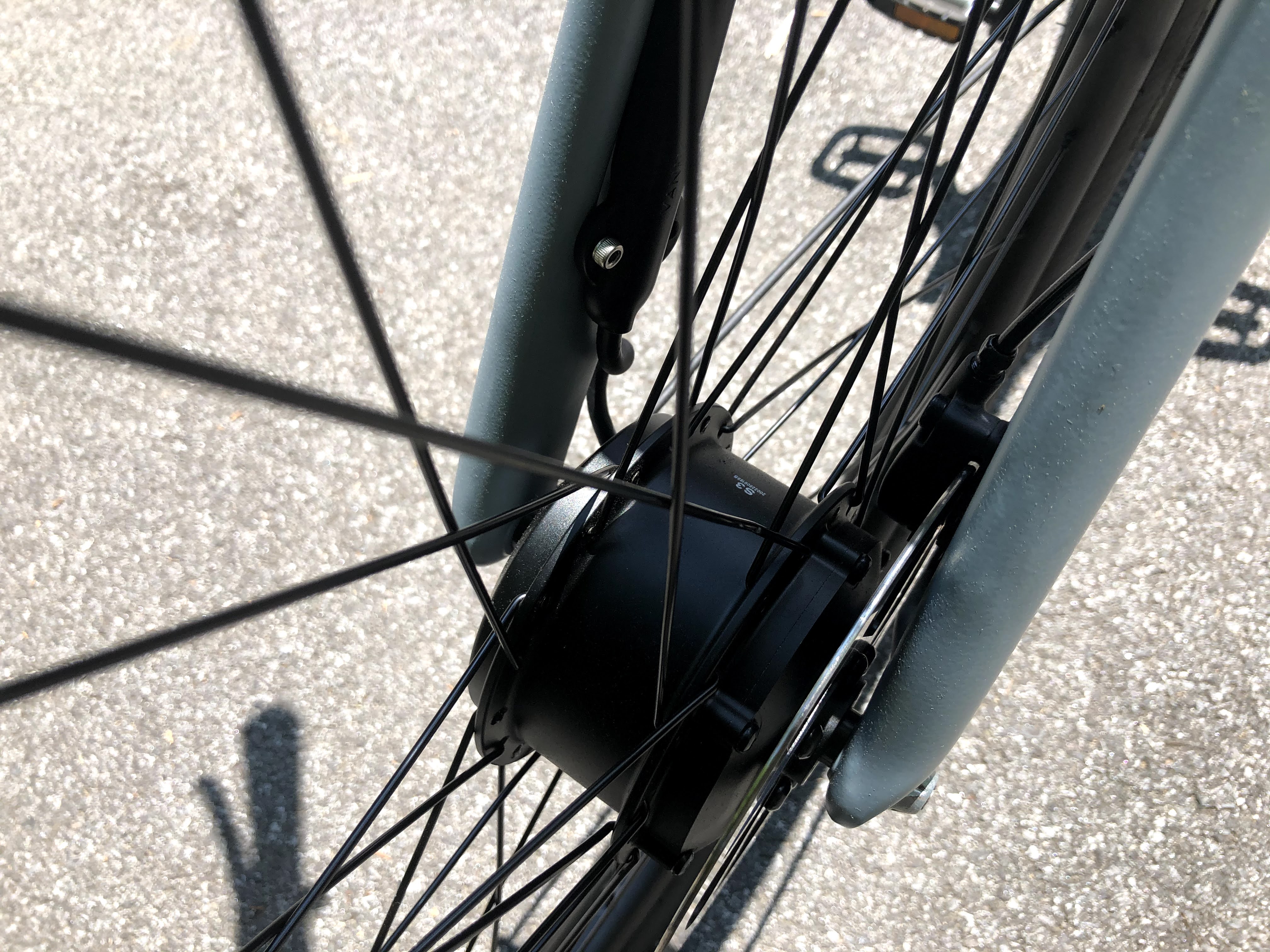 VanMoof is taking the unorthodox route of placing the motor at the front of the bike. It definitely works for the S3 because the motor is relatively small and light. The flipside is that the motor isn’t super-powerful and won’t give you a great experience if you don’t like pedaling or expect a lot of help going up steep hills. You can ride that throttle up to 15 mph or so on flat ground but that’s no way to live.

As I mentioned above, it was easy to pop the front wheel on and off (with security lug nuts) but getting that cable cover screwed in made me insane. That would also make taking the front wheel off a hassle, but doable.

The motor itself is quiet but you can certainly hear when it engages.

As far as e-bike hardware goes, the S3 is a gorgeous, well-designed but mediocre-powered e-bike. What sets it far apart from its peers is the technology in here. The well-hidden speakers on the bottom side of the top tube are loud and when your Bluetooth connected smartphone comes within reach, it turns on the bike with a loud futuristic noise. When you leave its Bluetooth range, it says goodbye in a similar fashion.

I’m not sure why you can’t play music from your phone through these speakers and annoy everyone around you but it would certainly be a doable software update.

Also, the smartphone app is by far the best I’ve ever seen for an ebike. This is where you adjust your gearing and can even track the location of your bike and remotely lock it up – something fun to do while your friends try out the bike.

You can also lock out the bike and set an alarm with a kick to the rear. I can’t imagine needing this but I live in the suburbs and don’t even use a lock. When I lived in LA, I had a bike I chained to a fence stolen, along with the fence. In NYC, I had a bike lock cut within 10 feet of an NYU security guard desk. So I get it.

The left-side button, which counters the throttle button on the right side, acts as a horn and you can currently set 3 different loud horn sounds including one that makes you sound like a barge. Car drivers love it!

Speaking of fixes, the matrix display on the top bar is super cool — when you can see it. The powder blue matte paint mixed with sunlight makes it almost unreadable but VanMoof says that they are adjusting the paint to make it less reflective in the sun. In the video above you can see the difference between dusk visibility and sunny visibility. 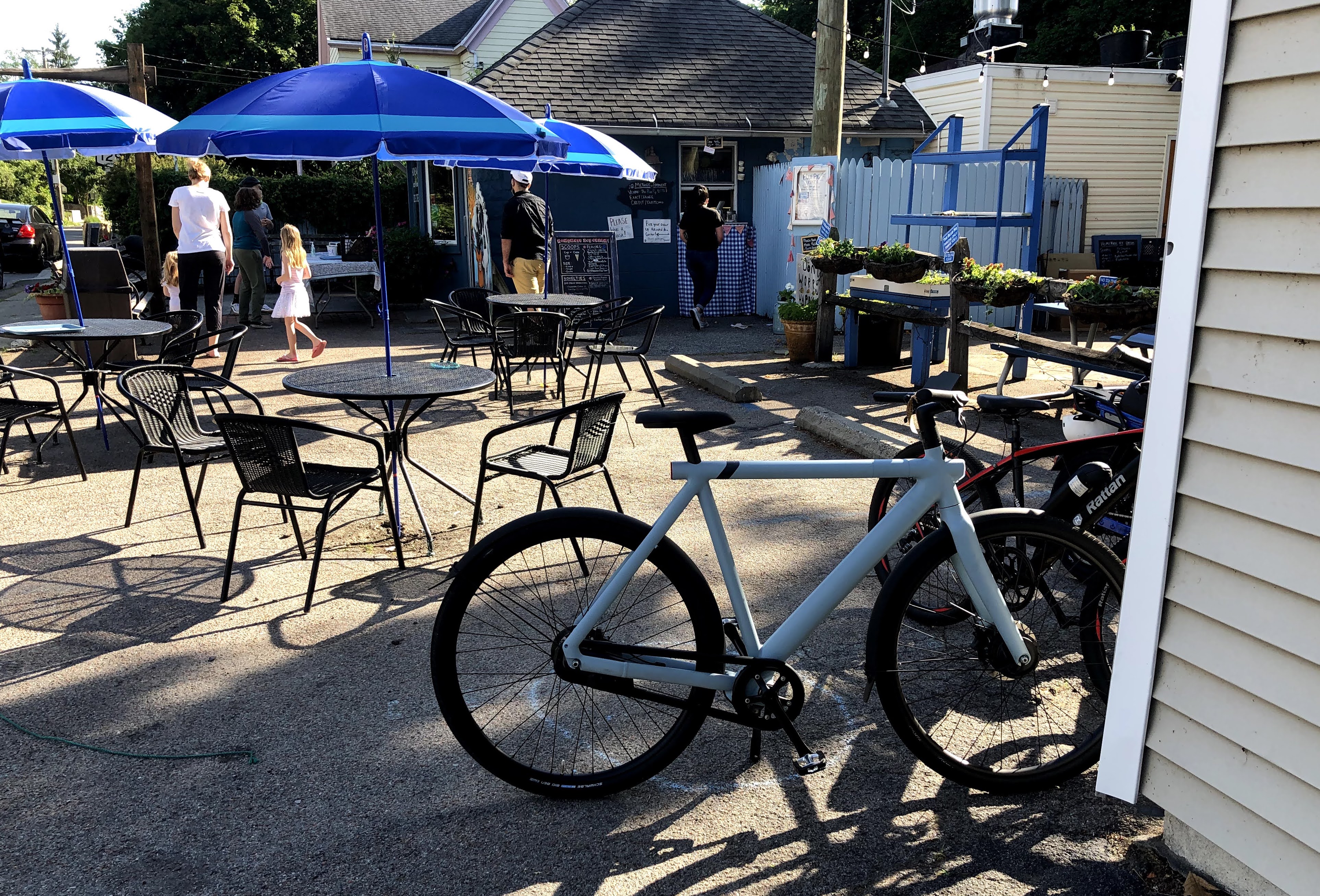 If you can’t already tell by now, I’ve got mixed feelings about this bike. On one hand, the price, technology, and design are all incredibly good. The technology direction is far out in front of any other ebike in the world.

But actually using the bike day to day teases out some drawbacks, specifically about power and the “more things to fail” type of complexity. My biggest issue was the auto-gearing. In theory, I could get used to auto gearing and after about a week I was OK with it – when it was working. But then when the gearing was wrong, like opposite high/low gear going up/down hills, I’d have to jump off the bike or use throttle only. Like all software issues, VanMoof said they were still updating the software on the gearing and the final version of the bike would have the problem worked out.

If I didn’t live in the mountains, I would have loved this bike. Not just the look and feel but also as a techie, I think the company is doing some revolutionary things.

But the bottom line for me is that heading out to my mountainous commute, I didn’t want to take the VanMoof over a dumb ebike, that I had to gear myself, and that just worked.