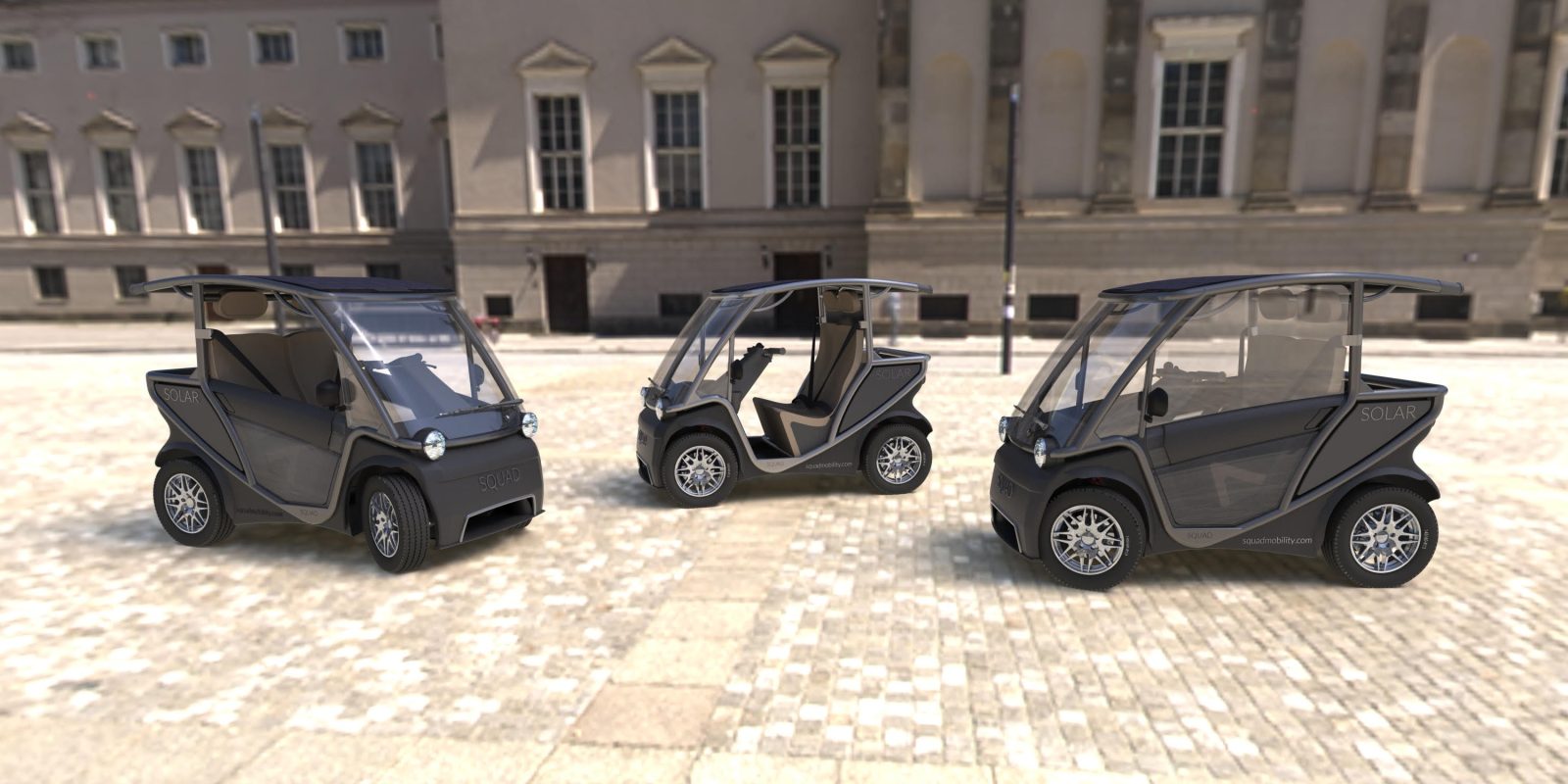 Amsterdam-based Squad Mobility’s solar powered electric two-seater quickly caught our fancy the last time we covered it. Now the Squad Solar City Car is back with updated design options for the solar-powered microcar.

It’s not on the market yet, but the Squad Solar City Car is headed that way with European homologation on the horizon.

The four-wheeler offers seating for two and comes in two versions with different speeds.

These classifications mean that in much of Europe, drivers will be able to take advantage of a number of cost and tax benefits, including no congestion charge, no road tax, no parking fees, lower insurance rates, and not even needing a drivers’ license in many markets.

And with rooftop-mounted solar panels, charging could be done inexpensively or perhaps for free, depending on the length of one’s daily commute. 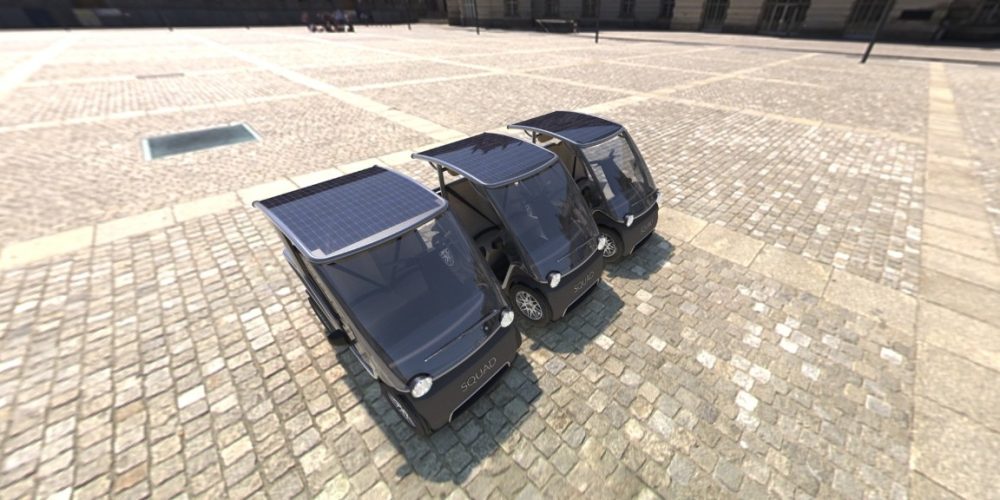 Of course these mini-EVs aren’t highway vehicles, but they could be great for city and suburban travel, especially on the many winding and narrow streets of European cities.

The Squad Solar City Car takes up just 2 square meters (21.5 square feet), and four can park in the space of a standard SUV. They offer seat belts and roll cages for added safety. 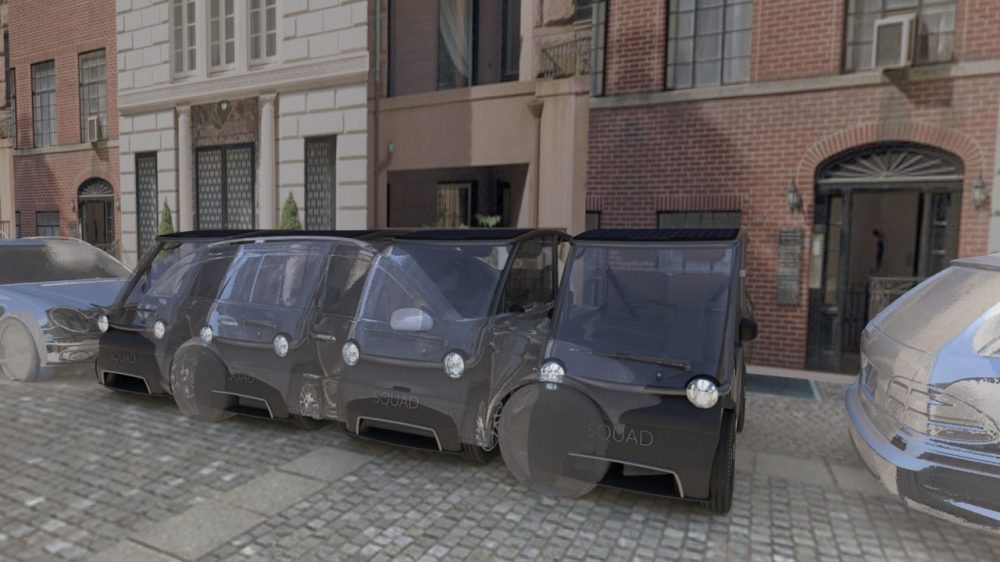 While the original design was a bit sparse on creature comforts, the team has added new options that were in high demand from reservation holders. Originally lacking doors, the Squad Solar City Car now has an option for either half doors or full doors. Models with full doors will also offer air conditioning as an option. The doors can even be easily removed for riding in nice weather.

The team also increased the power of the solar panels on the roof since the last time we checked in with them.

As Squad’s chief of design Chris Kolk explained to Electrek:

There are quite a few minor detail updates and some larger ones. The solar roof generates 20% more power, by using more powerful cells and increasing the solar cell area. The doors add to the feeling of safety and protection, however, we were also keen on keeping the social interaction and the feeling of freedom the open version offers. Therefore we have opted for removable doors, which is a challenging but satisfying solution. 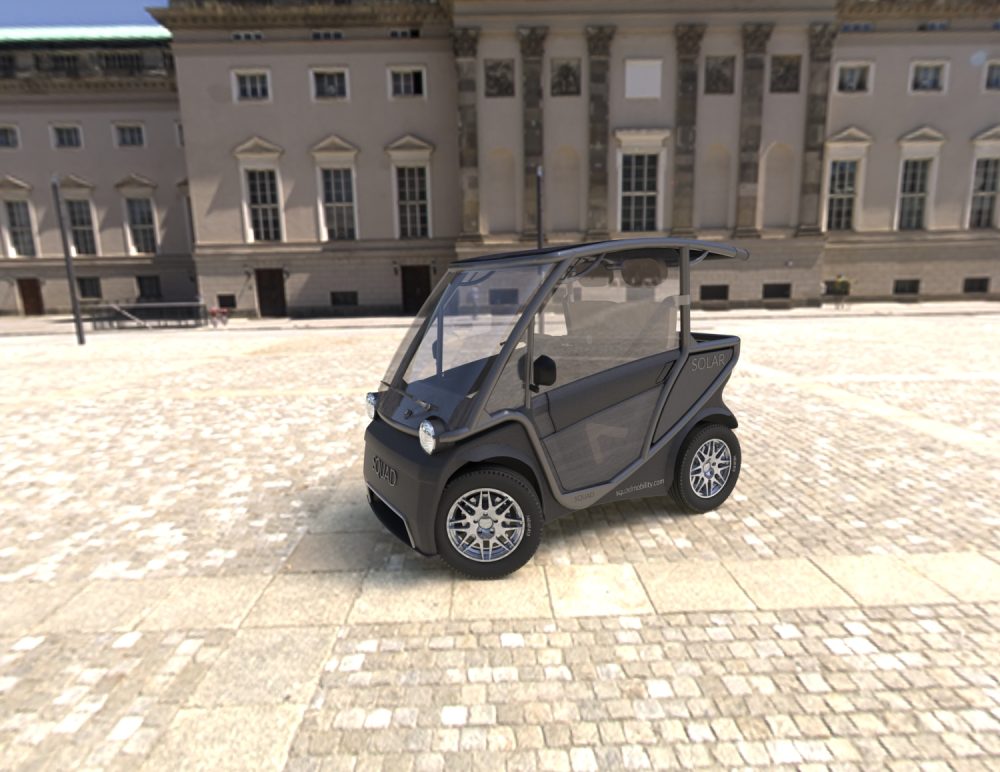 Speaking of reservations, Squad Mobility is already accepting pre-orders. The MSRP of the Squad Solar City Car is currently set at €5,750 (US$6,330) before tax. Reservations can be made with a payment of between €50 to €5,000 depending on whether you want one of the first 100 Signature versions or can wait a bit longer. The first deliveries are expected in late 2021, so don’t expect to be driving your squad to the beach any time soon.

Squad Mobility is also positioning the Squad Solar City Car as an optimal vehicle for car-sharing services, so you might be able to get in one someday even without buying it.

According to CEO Robert Hoevers:

After our media release last November we have received tremendous interest from all over the world. We have received a lot of feedback as well from consumers, MaaS operators, distributors, suppliers, and investors.

I really like it. It may be a bit golf cart-ish, but the utility is definitely there. And between the seat belts, the roll cage and the doors, the Squad is definitely going to be a lot safer than a golf cart.

The solar is a huge advantage, too. Depending on your commute, you might not be able to get a full recharge each day, but even half a charge helps reduce load on the grid. And if the roof of the car is just sitting in the sun all day anyway, why not use it?

There have been full-sized electric vehicles that have experimented with solar, as well as interesting car covers with solar panels as well. But solar simply doesn’t make as big of an impact on larger vehicles that require significantly more energy to drive. But on smaller vehicles like these? It could be perfect!

And that price isn’t too bad, either. Heck, solar-powered pedal cars that are glorified recumbent bicycles cost more than this. Though we haven’t actually seen if Squad Mobility can produce the cars for this price yet, so I’m withholding my final judgment until then.

What do you think of the Squad Solar City Car? Let us know in the comments below.