Sono Motors, a solar electric car startup that has gathered some traction over the last few years, has announced that it needs to crowdraise $50 million in the next 30 days in order to survive.

In March, the company unveiled the production version of the Sion, which is equipped with both a 35 kWh battery pack and an array of solar cells.

They claim that these solar cells can add enough range to the vehicle’s battery to enable an average commute.

The company said it was aiming for a range of ~155 miles (250 km) on a single charge and claims that the solar cells on the vehicle can add up to 30 km of range per day.

Sono previously said that the Sion would start at €16,000 (~$18,000), but buyers would have to pay an additional fee to acquire the battery pack or pay a monthly fee, similar to the scheme used by Renault with the Zoe in France.

The specs and price were enough to convince thousands of people to put down a reservation, but the company has suffered some delays. Most recently, they were targeting a start of production during the second half of 2020, and they wanted to do that at SAAB’s former factory in Sweden.

Now Sono is in need of more money to be able to reach production, and they said that they don’t want to work with “traditional investors.”

They announced today that they need to raise €50 million in the next 30 days.

We realized again and again over the past few months that we have entirely different goals to traditional financial investors. Aggressive growth and quick profits are difficult to reconcile with a sustainable corporate and vehicle concept, which is designed to give access to affordable and eco-friendly electromobility throughout. In addition, providing startups that have a capital-intensive business model with venture capital does not work in Germany, neither in the initial stages nor at the growth stage. Had we relied solely on funding measures or the German market environment, Sono Motors would probably not exist in its current form. Urgent action is required from the politicians in this area. It should be possible to implement such a future project in Germany and lead it to economic success. We will continue to fight anyhow. For climate-friendly mobility and for our reservation holders.

We were torn between our pledge to the community and the investors’ demands and were increasingly moving away from who we really are, which is something we absolutely had to correct. Social responsibility and climate protection would otherwise have fallen by the wayside, and so would all that we stepped up for. We are now focusing on continuing to fund our innovative vehicle concept together with people who want to see the Sion on the road — together with a community that asks for a company which acts responsibly, critically questions itself, and can be judged honestly on the basis of the statements it makes.

Sono is asking for donations, pre-orders with deposits, and even loans in their crowdfunding effort: 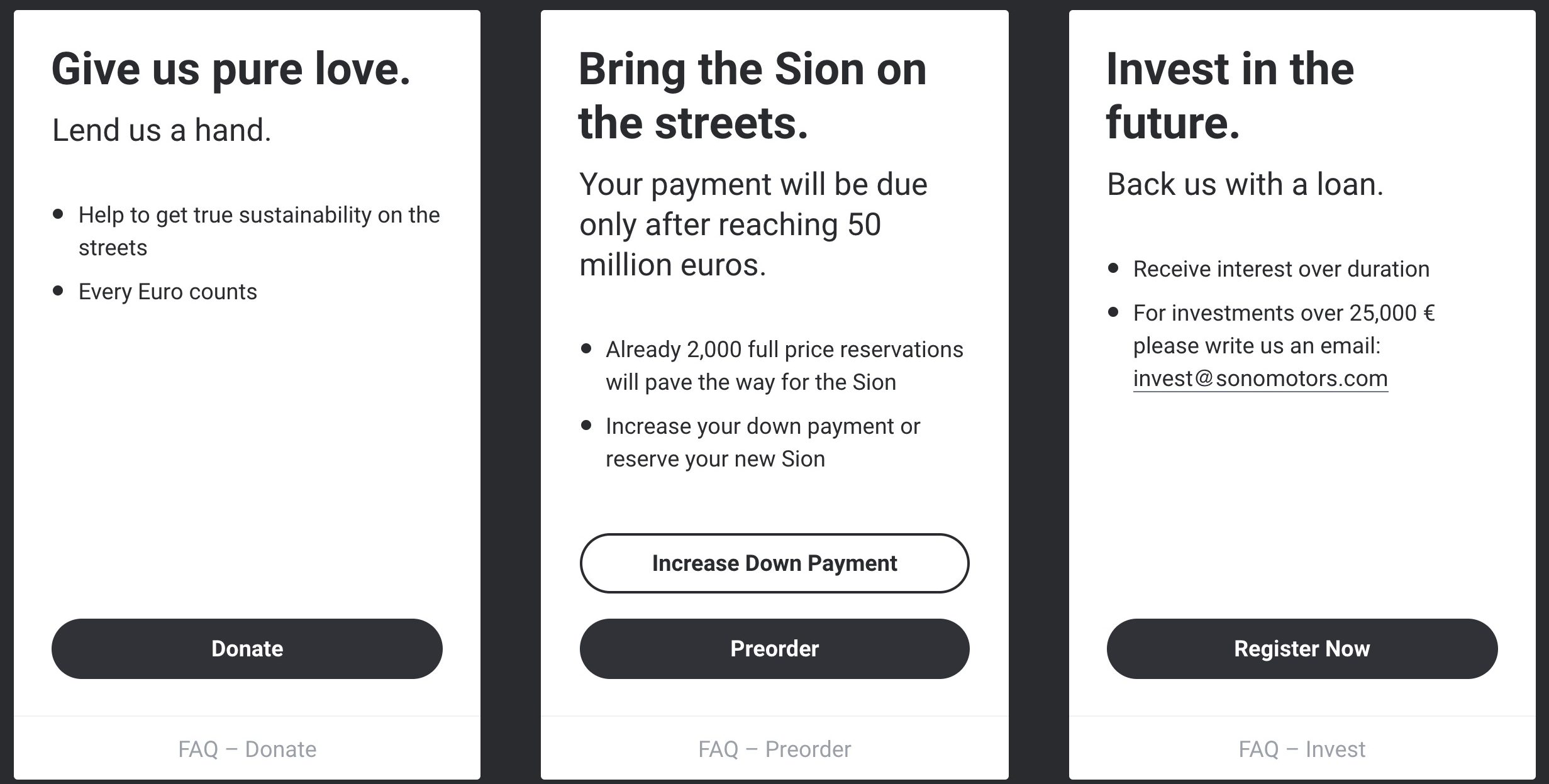 Within the first few hours of launching the campaign, they have already raised €2.7 million.

If they do manage to get the money, Sono still warns of additional delays as they say that they now can’t see the first vehicle deliveries happening until September 2021.

As always, crowdfunding comes with some risks. You should keep that in mind if you decide to participate in this campaign.

With this said, I like what Sono is trying to do with the Sion and I would love to see it make it to production.

But €50 million is a lot to raise through crowdfunding, and it’s also not a lot of money to bring a car to market.

We will keep an eye on the effort since it looks like their “make-it-or-break-it” moment.