Part bicycle and part car, these solar powered velomobiles are designed to fill an interesting niche in the personal mobility industry. With all electric-drive capabilities, working pedals, and a solar panel on the roof, these lightweight EVs are sustainable, efficient little grocery getters.

Bike-cars are just that – functional bicycles (or tricycles) that are outfitted like cars with relaxed, enclosed seating and room for cargo.

Two US companies have been busily cranking out their own designs to meet the demand for customers that like the idea of a solar powered electric cargo bike in the form factor of a micro car, but that don’t want the hassle of an actual car to deal with.

Both are three wheeled electric tricycles with enclosed seating, full light packages, and speeds of up to 20 mph (32 km/h) under electric-only power. Both also offer a roof-mounted 100W solar panel – standard on the ELF and an option on the PEBL. Depending on the size of the battery pack chosen, a full charge by sun could take a day or two for a full charge, so the solar panel is mainly for range extending rather than being a primary charging device. Partially charged batteries can be fully recharged in a few hours with the solar panel, and the vehicles can be charged even quicker by a standard wall outlet. 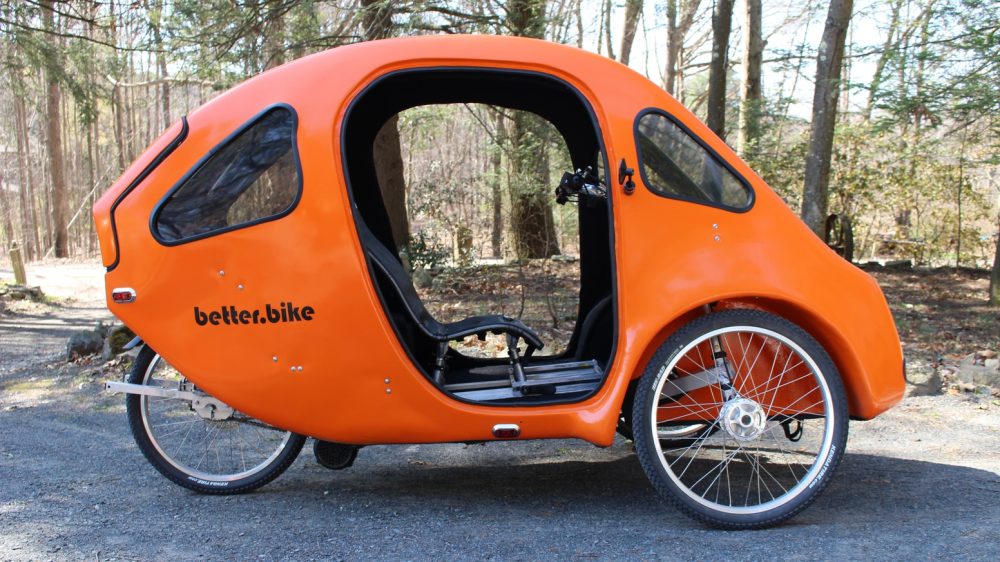 The tadpole trike design with two wheels in the front offers higher stability than the traditional dual-rear wheel tricycle design, and has often been used in other larger three wheeled electric vehicles such as the Sonders EV and the T-Rex.

The ELF actually began almost six years ago as a Kickstarter project that raised over $200,000 to fund the first production run of the vehicles, and has since shipped over 1,000 ELFs to customers around the world.

The ELF is comes in two models, a single seat model and two-seater which allows more cargo room when not carrying a rear passenger. And with a passenger/cargo rating of 350-550 lbs (158-250 kg), the ELF can definitely handle hauling some cargo.

Earlier versions of the ELF had open floor panels, but recent versions have added the option to include floorboards and optional doors that can make the ELF more all-weather capable. 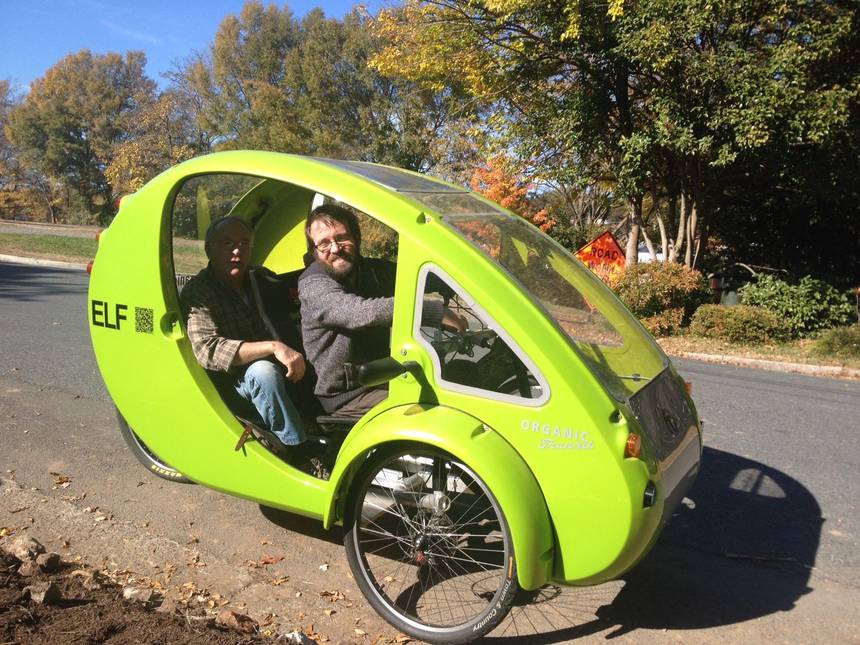 Despite the 750 watt electric motor topping out at 20 mph (32 km/h) to keep it street legal, Organic Transit claims that riders can reach as high as 25 mph with additional pedaling, but advises that the ELF is not meant to travel at speeds greater than 30 mph (48 km/h).

Better Bike began developing their own PEBL electric bike-car in 2013, then ran a crowdfunding campaign to fund production in 2016, with deliveries beginning in 2017. According to an email from the company in April of this year, Better Bike had sold 51 PEBLs and delivered 26 of those to customers so far.

Similar to the ELF, the PEBL sports a tadpole trike design and an almost entirely enclosed hemp-based body. The front windshield even comes with an optional windshield wiper. 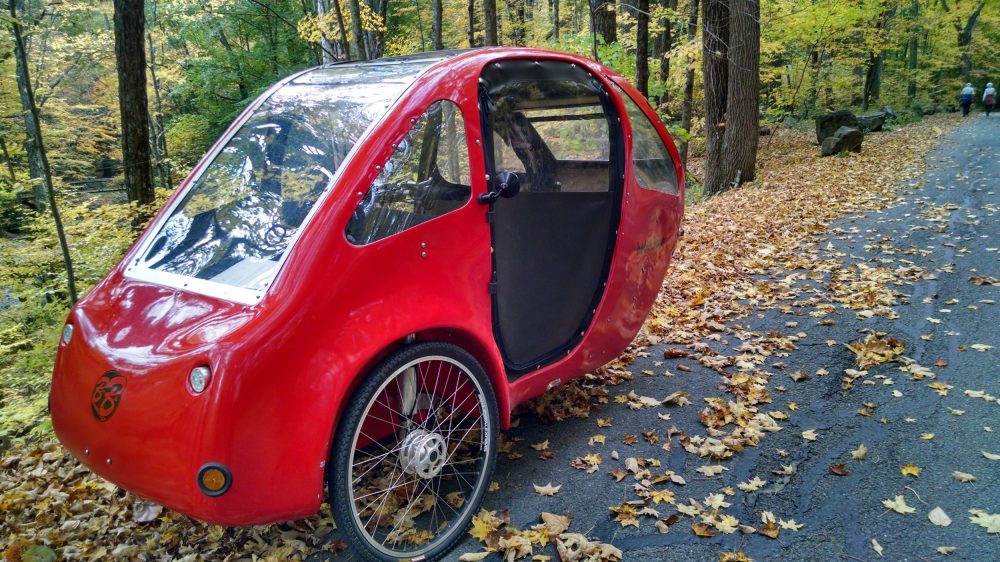 As Better Bike was forced to design with the harsher New England weather in mind, the PEBL is outfitted for operation in rain or shine and includes roll up and zippered doors as standard features.

The first PEBL vehicles shipped to customers included a 750 W motor, but now a new version is in the works that offers a more powerful 1,500 W motor and a switch to flip back and forth between 750 W and 1,500 W power modes.

The PEBL also offers a more refined instrument panel of sorts, further enclosing the passenger cabin and also allowing you to monitor the electrical systems.

At first glance, the ELF and PEBL both look fairly strange. But if you can get past the looks, they are actually quite utilitarian.

Legally considered to be electric bicycles, they retain all the advantages of bicycles. They can drive anywhere a bike can ride, meaning they offer full use of public roads and bike lanes that are open to bikes, as well as the benefits of free parking and no need to register or pay for insurance.

With the enclosed design, they can be driven in a wider temperature and climate range. Plus, the relaxed seating posture and highly adjustable seats make them much more comfortable than a bicycle. And being able to carry a pile of groceries, an adult passenger or multiple children is an added benefit that even many cargo electric bicycles would find difficult. 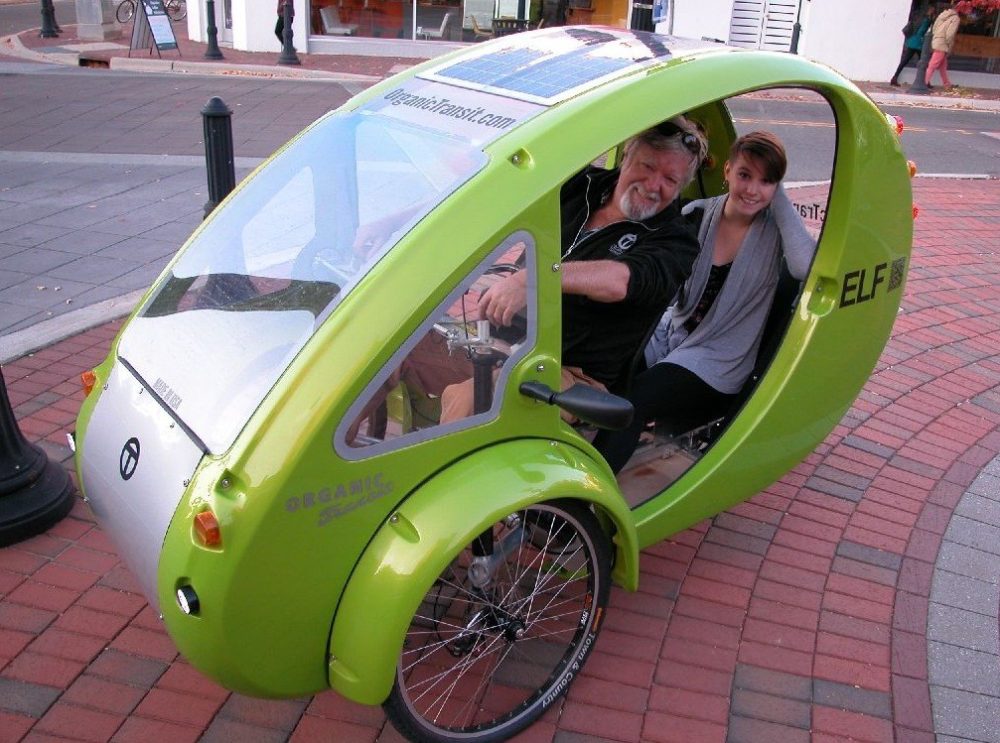 The aerodynamic shape is also fairly efficient as well, at least considering the increased size and weight of the vehicles. Organic Transit claims that the ELF uses less than 30 wh/mi (18 wh/km) which can provide a range of 25-40 miles depending on terrain, conditions, driving style, etc.

So far, bike-cars like the ELF and PEBL have proven to be popular among a wide range of users, from private individuals living everywhere from cities to gated neighborhoods in the suburbs, to large corporate campuses and universities.

Sure, they look a bit odd, but as soon as people realize that they don’t need a 3,000 lb car to move 250 lbs of combined human and belongings to the mall and back, options like these might become more popular. 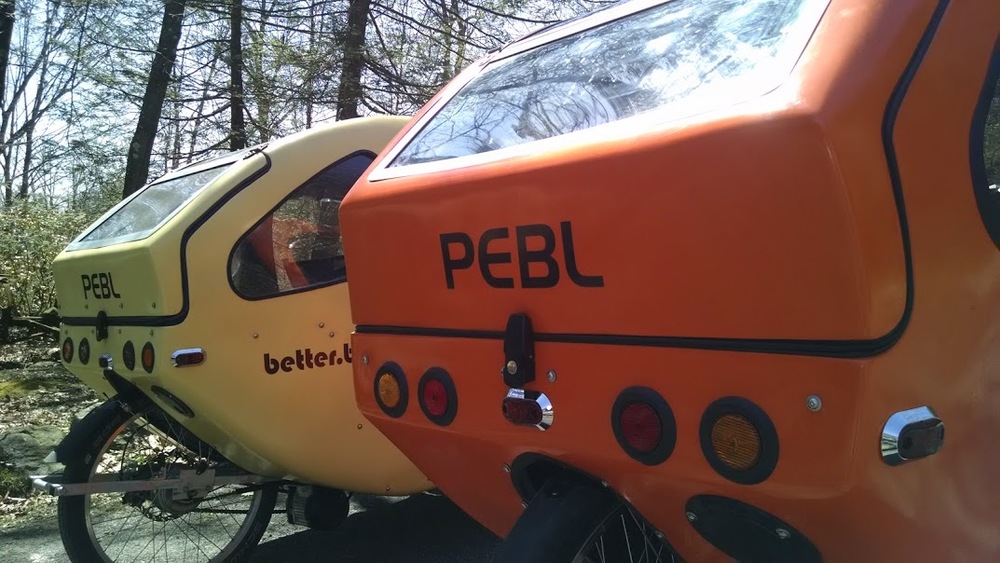 Bicycle-friendly infrastructure also plays a large role in the adoption of these types of vehicles, as safe bicycle lanes and cycleways help remove barriers to entry for those considering commuting on two or three wheels. In bicycle-friendly countries like Denmark and the Netherlands, it is normal to perform a large portion or even a majority of one’s daily commuting by bicycle. In many cities, it is simply faster, cheaper and more relaxing than driving.

A shift in mindset and cities that make using these types of vehicles possible could further expedite adoption of bike-cars in the US.

That’s going to depend on what your definition of “affordable” is. But for most people, sadly no. The Elf starts at around $8,900 while the PEBL is a bit cheaper at $7,900. Features like the solar charger, cabin heaters, and other amenities cause the price to rise even further.

Why are they so expensive? Scale, mostly.

These vehicles are essentially hand built, one a time. Because they are so new, they haven’t had a chance to scale up to any size sufficient to bring down costs.

But like all new technologies, as demand continues to grow and new options enter the market, prices inevitably fall.

So while most bike-car drivers are the epitome of early adopters, that may not be the case for too much longer.