There’s nothing wrong with an entry-level electric scooter, but sometimes 15 mph (25 km/h) just doesn’t cut it on bigger roads. That’s when the next class of scooters, with 25 mph (40 km/h) speeds and larger batteries, show their true worth.

Today we’re going to compare two of the most popular 25 mph electric scooters that still offer a compact design for convenient commuting. Let’s get started with the face-off between the WideWheel Pro and the E-Twow GT electric scooters!

Before you ask, “But what about the…” let me point out that there are lots of great electric scooters in this class.

One of my favorites is the E-Move Cruiser, another 25 mph favorite. But with a deck large enough to deserve its own zip code and a giant battery that can last for weeks, it and some other scooters are a bit outside the scope of this showdown, which focuses on scooters that are powerful yet compact.

Both the WideWheel Pro and the E-Twow fulfill these qualifications and thus make great choices for riders seeking a powerful commuter scooter that doesn’t require much space in an apartment, garage, or dorm room.

Check out my video comparison of the two scooters below, then read on for all of the stats.

How do the performance specs compare?

The WideWheel Pro just barely edges out the E-Twow GT for speed, with a 26 mph rating versus the 25 mph rating of the E-Twow.

They’re so close though, we can effectively call this a near-draw.

When it comes to power, the WideWheel Pro increases its small lead. With two 500W continuous motors for a total of 1,000W of power, it has a measurable power advantage over the single 700W motor in the E-Twow GT.

Side-by-side you can feel the difference with a stronger launch on the WideWheel Pro, which has a more powerful start. If you only had one scooter, though, both have enough power to give you that giggly feeling as you try to hold on. 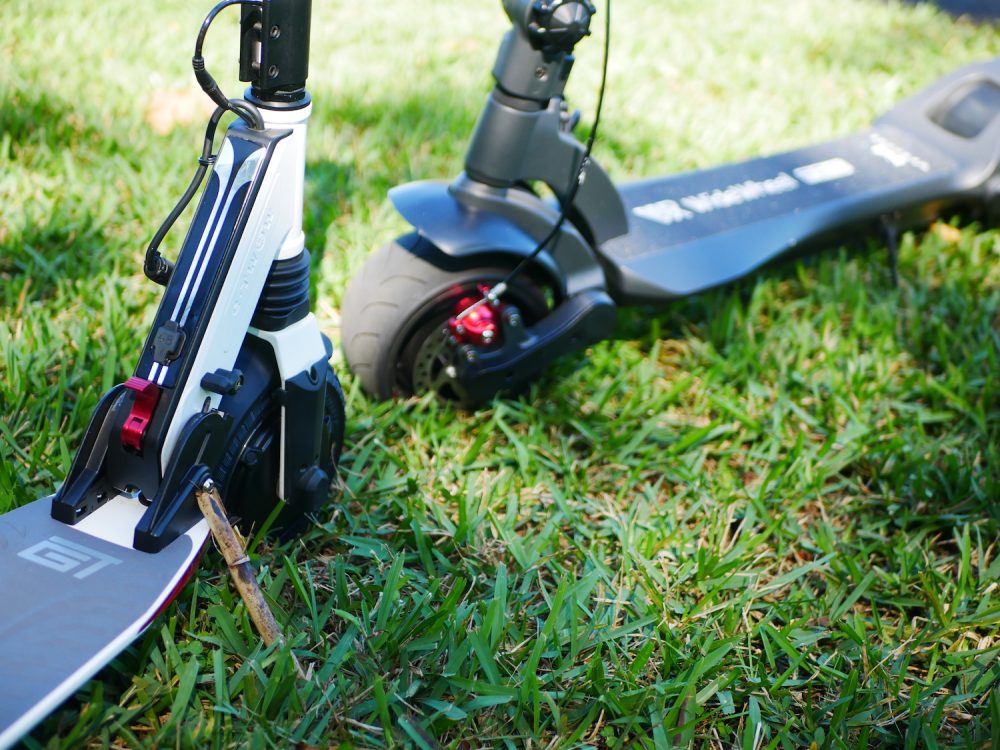 Exact numbers are so hard to gauge because they depend on so many factors including rider weight, terrain, road conditions, etc. But a safe real-world range at the higher end of the scooters’ speed ranges are around 25 miles (40 km) for the WideWheel Pro and 20 miles (32 km) for the E-Twow GT.

Price isn’t really a performance spec, but it’s an important spec, nonetheless. The WideWheel Pro is more costly at $1,319, while the E-Twow GT is a bit easier on the wallet at $1,080.

But there’s more than just performance figures and price sheets to consider here. Next we’ll take a look at how easy the scooter is to use.

If the WideWheel Pro was the clear winner for performance specs, then the E-Twow takes the prize when it comes to convenience.

The weight difference between the scooters is staggering. The WideWheel Pro weighs a whopping 54 lb (24.5 kg) while the E-Twow GT only weighs 26 lb (11.7 kg). Half of the weight for the same speed rating is huge.

For anyone who needs to pick up the scooter and carry it up stairs or load it into a car trunk daily as a last-mile vehicle, the E-Twow GT is a clear winner. Folded, it’s easy to carry one-handed. I can also manage the WideWheel Pro one-handed, but I can’t carry it that way nearly as far. Stairs are a lot less fun with a scooter that weighs twice as much.

Next, the folding mechanism on the E-Twow GT is more convenient as well. It’s got a foot lever that doesn’t even require you to bend down or use your hands. Compare that to the WideWheel Pro, which requires you to spin a knob several rotations. This might sound like a #FirstWorldProblem, but not having to bend over or use your wrist to fold the scooter is a nice advantage.

The one area I always ding the E-Twow GT on for convenience is its lack of a kickstand. You can leave it partially folded and it will stand in that position, but the kickstand on the WideWheel Pro is a nicer parking solution, in my opinion.

[Update: I’ve been informed that a recent update has added a kickstand to the latest E-Twow GT. Nice!]

Both have airless tires, which means neither will ever leave you pushing a scooter with flat tires.

Which is more comfortable?

Both scooters offer full suspension, though the suspension differs.

The WideWheel Pro uses dual swing-arm suspension, while the E-Twow GT has a rear swing-arm and front suspension stem.

Both methods work fine, though I might say that the WideWheel Pro feels a bit stiffer than the E-Two GT. When I hit gutters or hop off curbs, both scooters seem to absorb the bumps without complaining, though neither will be enough for crazy off-road riding. Both scooters are optimized for absorbing road shock and minor pot holes or road irregularities, which is what they both excel at.

I’ve done some off-roading with the WideWheel and it sure is fun, but I’d rather take a more substantial and higher-power electric scooter if I’m doing serious trail riding. 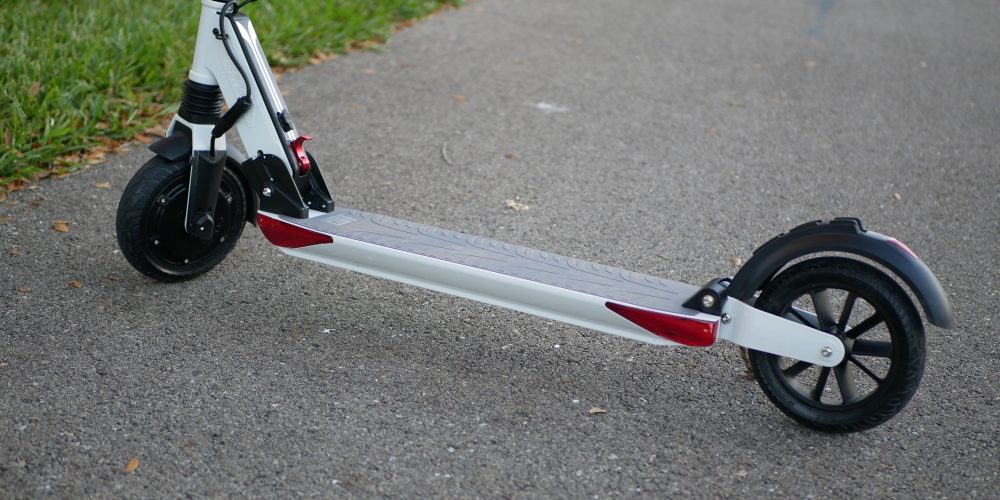 So which electric scooter should you get?

Well, that’s the question, isn’t it?

Ultimately, the decision will likely come down to a combination of pricing and performance. Are you on a strict budget? Then the E-Twow GT might be better for you.

Are you looking for more range and higher power? The WideWheel Pro might be the right choice.

But wait, do you need extreme portability and light weight? Now we’re back at the E-Twow GT.

Or are those wide wheels calling to you, begging to be carved around corners and through the dirt? The WideWheel Pro is your only option there.

For me, I find both scooters to be great rides, and the one I choose largely depends on my needs at the time. In a perfect world, we’d all have every scooter we wanted. But this is the real world, and most of us have to make those decisions occasionally.

Let me know in the comments what you think of the two scooters, and which one would be right for you!