Donald Trump promised to deregulate environmental and climate policies, and he’s delivered. Why did he want to do that? Because he thinks the rules are unnecessary, that industry can regulate itself, and he continues to actively try to save the fossil-fuel industry. (It’s not working.)

The New York Times drew data from eight sources to calculate all of Trump’s rollbacks, and here’s what they found:

Using the Congressional Review Act, 64 rules have been reversed, and 34 are in progress. So that’s 98 in total. And the majority of rollbacks have been carried out by the Environmental Protection Agency. (Oh, the irony.) And meanwhile, the Interior Department is working to open up more land for oil and gas drilling.

But these rollbacks haven’t occurred without a fight. For example, the Natural Resources Defense Council has taken the EPA to court 65 times and won 60 of its cases. The group has filed 107 lawsuits against the US government’s rollbacks.

Visit the New York Times‘ website (link is above) to see the full list of what’s been rolled back. Here are the numbers by category:

Brookings also has a great deregulation tracker tool that you can access here for free.

Electrek frequently writes about the rollbacks — and we also write about the rollbacks being overturned by the judicial system. On April 7, for example, a federal court struck down the EPA’s rollback of the greenhouse-gas-leak prevention rule. The court said that the Trump administration did not follow proper procedure.

And on April 23, the Supreme Court upheld the Clean Water Act in Maui.

If we could perhaps be able to write about reinstated or newly implemented environmental protections in 2021, that’d be great, thanks.

Following from above, Carol M. Browner (left), the board chair of the League of Conservation Voters and former Environmental Protection Agency (EPA) administrator, wrote an op-ed for the Hill on Wednesday about how crucial it is to have an environmental champion in the White House in 2020. You can read it in full by clicking on the link, but here’s an excerpt. (And Ms. Browner, we couldn’t agree more. It’s not about partisanship: It’s about saving our planet. Life or death.)

The COVID-19 crisis has exposed a number of vital truths about the preparedness of our country to deal with such disasters and the absolute imperative that we elect leaders who will listen to experts and scientists and act accordingly.

Climate-related natural disasters have already cost thousands of lives and more than $450 billion in the past three years and could cost $54 trillion worldwide by 2040. The US economy could shrink by as much as 10% or upward of $500 billion a year in crop damage, lost labor, and extreme weather damages. This is almost double the economic blow of the Great Recession of 2009. The list of costs due to inaction on climate is long.

The choice we make this November will define the world our children will inherit. The 2020 elections are our last, best chance to elect leaders at all levels of government who will advance racially just and equitable solutions to the climate crisis. The stakes have never been higher. 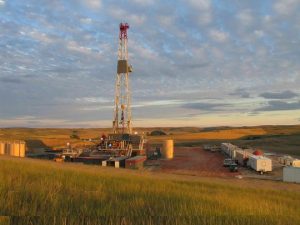 Here’s a current example of a Trump administration fossil-fuel push gone wrong. The Bureau of Land Management (BLM) was told by a federal judge last Friday that it failed to adequately assess environmental impacts of oil and gas leases in Montana. Judge Brian Morris then set aside hundreds of those leases in eastern Montana.

Morris said that the BLM must conduct a more complete analysis of environmental impacts before sales move forward.

The BLM failed to consider the potential impacts the oil and gas leases would have on Montana’s groundwater.

The Court does not fault BLM for providing a faulty analysis of cumulative impacts or impacts to groundwater, it largely faults BLM for failing to provide any analysis.

Photo: Montana Board of Oil and Gas Conservation

This is a seriously cool house project located in Eton, England. I want to live in a house made of cork made from old wine bottle stoppers and renewable timber!

The innovation and design is fantastic. And as the World Economic Forum points out, it’s recyclable, too.

A positive story in the middle of lockdown:

And it's completely recyclable.

As the US hurricane season kicks off next month, and it’s predicted to be a particularly active one, let’s take another look at Lowland Kids, a 22-minute documentary that takes a look at how climate change is erasing the Louisiana coast, and the impact of that on the generations of families who live there. I think we all know how devastating hurricanes have been for Louisiana, and rising sea surface temperatures make hurricanes more intense.

You can learn more about the 2019 film here, and watch it in full here. The trailer is below.

And Nakabuye Hilda F. in Nairobi:

We are watching you,
We did not come this far to give up. No no no! no!
We are here to make our voices heard, and you ought to listen to us.
We are not giving up this fight, NEVER! #FossilFree #SaveNairobiPark#ClimateStrikeOnline #DigitalStrike @Fridays4future @GretaThunberg pic.twitter.com/kaG5VYAFbv

And I love this support for the young activists from older generations. #BoomersForClimateJustice David Merriam, 73, says he is “campaigning for a livable planet for my grandchildren and future generations.”

And finally, here’s FridaysForFuture Pakistan, who nods to the country’s tree-planting initiative that we wrote about last week:

This Friday we have all pledged to protect forests at all costs in compliance with the theme!@GretaThunberg #noforestsnofuture pic.twitter.com/vrIW2u3I7A