Electrify America and Hyundai-Kia have a two-fold problem with their fees for fast-charging. First, where it is allowable, the fees are based on time and charged  by the minute. The second part of the problem is that those fees are tiered, based on the maximum possible kW charging rate ­– not the rate that your car actually charges. Today, Electrify America announced a temporary fix for the Kia Niro EV by ditching the tiers and charging a flat rate of $0.35 per minute.

In March, Electrify America made the same rate available to Hyundai EV drivers. Now both Hyundai and Kia EV drivers get the flat 35-cent rate by registering their VIN with EA.

What makes Hyundai-Kia EVs problematic, more than other electric cars, is their fast-charging rate being on the cusp between two different EA pricing tiers. Based on Electrify America’s rate for non-members, cars that can charge between 75 kW and 125 kW pay $0.69 per minute.

When you plug in a Hyundai or Kia EV to an Electrify America fast charger, there’s a handshake between car and charger. That handshake identifies the max charging rate of the Hyundai-Kia EV above 75 kW. So the entire charging session (before the Band-Aid) was $0.69 per minute.

The meter keeps running at 69 pennies-per-minute regardless of how fast or slow those electrons flow. But as anybody who fast-chargers an EV knows, that rate fluctuates during a charging session and is almost always way below the max rate. 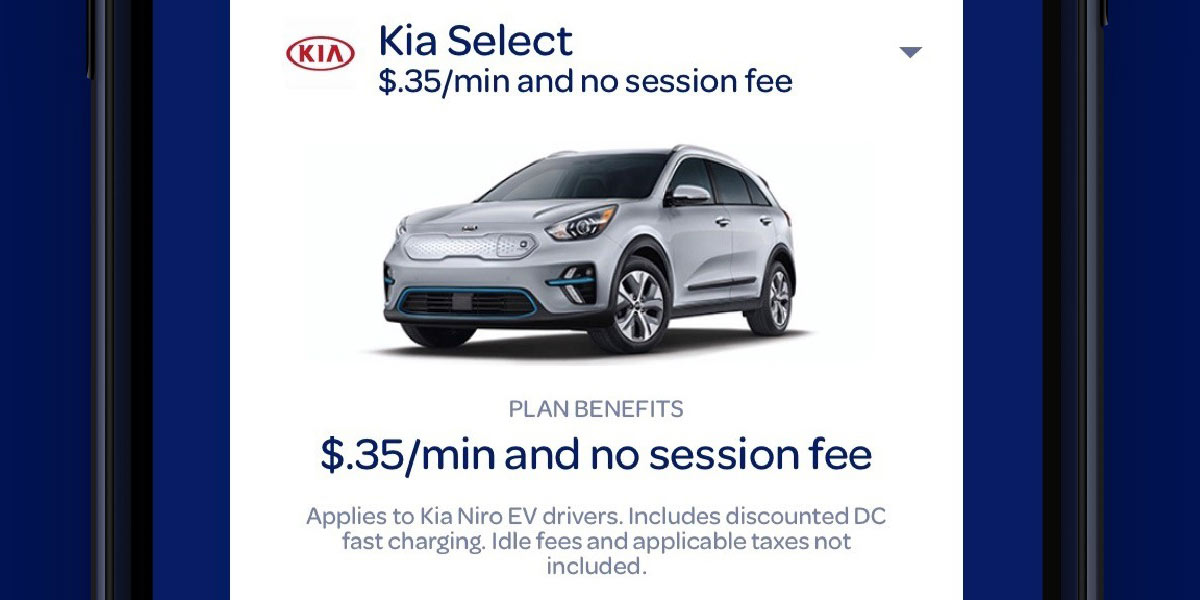 The result for Hyundai-Kia EV owners is an excessive rate that can be three or four times the typical cost. Today, Electrify America kinda sorta fixed the situation for Kia electric vehicles by implementing a flat rate of $0.35 per minute. As mentioned above, that Band-Aid was applied to Hyundai EVs a month ago.

Mike Moran, an Electrify America spokesperson, told Electrek today that about half of US states do not allow charging to be priced by the kilowatt-hour — the more accurate way for EV drivers to pay for what they are getting.

Moran also said that Electrify America would comply with new rules in California that ban unfair by-the-minute fees announced in December 2019. These rules prohibit operators of electric vehicle charging stations from billing by the minute at new 240-volt stations from 2021 and new DCFC stations 2023 onwards.

“We don’t see an issue with that. We’ll be complying and I wouldn’t be surprised if we don’t comply with that sooner.”

In the 20 or so states that force charging networks to sell by the minute, Tesla provides a rate that beats EA fees. For vehicles charging below 60 kW, the fee is $0.13 a minute. For EVs above 60 kW, the cost is $0.26.

Moreover, Tesla doesn’t use fees based on a theoretical max so-called handshake charging rate. In the minutes when the rate is zipping along above 60 kW, you pay the higher fee of $0.26. And when it falls below 60 kW, the meter automatically cuts the price in half.

It’s a good thing that EA and Hyundai-Kia recognized the problem of per-minute EV charging based on theoretical high rates. The flat $0.35 rate is better, but still high ­– and the situation is still a mess.

To facilitate the mass adoption of electric vehicles, fast-charging should be much cheaper than gas, consistently priced, and easy to understand.

California had the wisdom to ban per-minute billing, although on a slow roll-out schedule. Admittedly, there are a lot of stakeholders involved (all the states) and technical problems to solve (getting proper displays on all chargers).

But the whole industry – including automakers, charging networks, and state legislators ­– should fix this problem pronto.