Hyundai Kona and Hyundai Ioniq EV drivers can get some relief from the pain of Electrify America’s opaque billing practices, at least until the end of the year. But you have to sign up with a promo code through the app. And only in the US, not Canada. And your rate will almost double at the end of the year, from $0.35 to $0.69 per minute.

Electrify America has three billing tiers, and while the precise prices vary slightly from state to state, those tiers will resemble the California spread:

There is a $1.00 “session fee” that is also applied, regardless of how long you charge for.

In contrast, Tesla charges only for actual kilowatt hours delivered in its Supercharger network. In the minority of states where Tesla is forced to sell per-minute, it uses two per-minute tiers: $0.13 at or below 60kW, and $0.26 above 60kW. When a Tesla driver’s charging session falls below 60kW as their battery fills up, they are automatically switched to the lower price.

California has banned companies like Electrify America from billing by the minute for all-new DC Fast Charging stations beginning January 1, 2023.

Hyundai Kona and Ioniq EV drivers, along with Kia Niro EV drivers, are among the most badly treated by Electrify America’s opaque pricing scheme. This is because those vehicles can theoretically accept slightly more than 75kW, which is determined by the Electrify America EVSE during the initial “handshake” and before any power is delivered. In practice, though, the entirety of these vehicles’ charging session will be spent below 75kW. Nonetheless, they’ll still pay $0.69 for every minute, as if they were receiving power between 75kW and 125kW.

This has lead to many highly critical threads on various EV forums, including an “Electrify America is a scam” post on Reddit’s r/electricvehicles, which netted 246 comments, and “Beware Electrify America” on Ioniqforum.com, both in the last few months. A recent post from a Hyundai Kona EV forum recounts the following:

Central California trip, I saw a few Electrify America charge station groups — all were empty of cars. I tried one and found out why. Posted pricing claims that charging at a 0 to 75kW rate is $.25 per minute; 0 to 125kW rate of charge is priced at $0.69 per minute. I plugged in for almost 22 minutes. $1 session fee added in, I was charged a total of $15.95 for 14.7kWh. Maximum charge rate was 55.8kW, but I was charged at the 0 to 125kW rate. This is more expensive than gasoline. Apparently the Kona sends out a signal that it can receive 80kW, but the most I ever saw is less than 56kW. As a result, that puts the charger into a price nearly 3x more than what actually happens.

This user paid over $1 per kWh for a rate that never exceeded 55kW. EVgo would have been less than half that cost for the same charging rate, and Tesla charges $0.28 per kWh even while delivering power at speeds up to 250kW.

Do you drive a @Hyundai Kona Electric or Ioniq Electric?
Download our app and check out the Premium offers section. We think you’ll like what you see. Use enrollment code "HSCharging" to activate this offer.
App Store: https://t.co/xwrjsCevrf
Google Play: https://t.co/KbZ8Qi2Sql pic.twitter.com/h0wQsC4vRv

You sign up for the offer within the app (account creation required) and have to attach a valid payment method to your account. This premium offer waives the $1 session fee and charges you a flat rate of 35 cents a minute to charge (this is 7 cents lower than the member price of 42 cents a minute and 23 cents cheaper than the retail per minute pricing for the 125kW tier that Hyundai Ioniq and Kona fall into).

You must register your VIN and are only allowed to charge that one vehicle using the offer. If you are an existing Pass+ member, you have to pick which billing account you want to use under Plan Details in settings prior to starting the charge. So if you have a BMW i3 and a Hyundai Ioniq and you want to charge both at the same time, you’ll need to swap to the Hyundai Select plan before starting the Hyundai and then switch to your Pass or Pass+ plan before you start the charge on the BMW.

The reaction to this offer has been mostly negative, both on Reddit and Hyundai EV forums. Users have pointed out that $0.35 per minute is still far more than the $0.25 Electrify America charges for the supposed “1 to 75kW” tier, which is the tier that matches the actual lived experience of Hyundai EV owners.

Electrify America provided some additional information in the comments to its Facebook post. The company stated that this pricing reprieve was in collaboration with Hyundai Motor America (which explains why Canada is not seeing the same reprieve) and also, notably, that it expires at the end of the year: 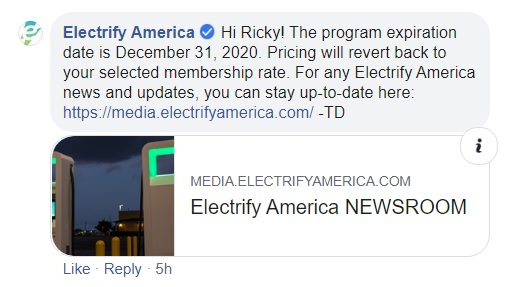 UPDATE: There is a dedicated landing page with information here: https://www.electrifyamerica.com/hyundai

Also, Electrify America tells Electrek that while the current Hyundai pricing expires at the end of the year, Kona owners will not revert back to the previous pricing, despite the suggestion in the Facebook comment above. The company will address Kona pricing before the end of the year.

I don’t think I can sum up the situation better than Reddit user minnisotadigger, who wrote in response to news of this coupon code: 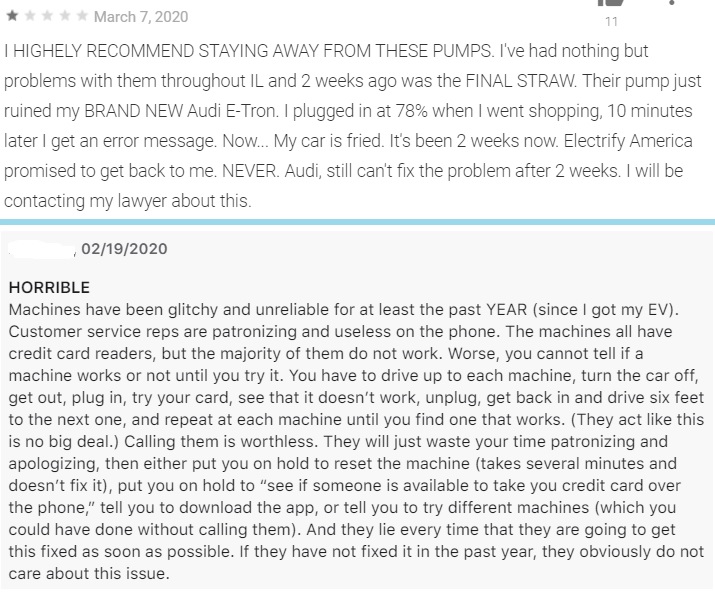