In the past two years, more than 8 million households in Japan have experienced power outages due to natural disasters. In response, Nissan developed a system that uses vehicle-to-grid technology that allows customers to use the Leaf’s battery pack to power buildings.

Since September, the system has been tested using renewable energy stored in an old Leaf battery pack, repurposed for stationary use, and then supplied to 7-Eleven convenience stores in Japan’s Kanagawa Prefecture. The system is expected to come to market by the end of 2020.

In the trials, the Leaf can directly power the building, or the repurposed battery can be charged via solar to either power a building later, or to recharge the car. It’s a multi-directional system. The goal is to allow residents to buy essential goods, from food and drinks to diapers and toiletries, when most other businesses are still shut down.

Two-way EV charging protocols, and vehicle-to-grid programs, have been discussed for nearly a decade. Tesla has also considered its use. 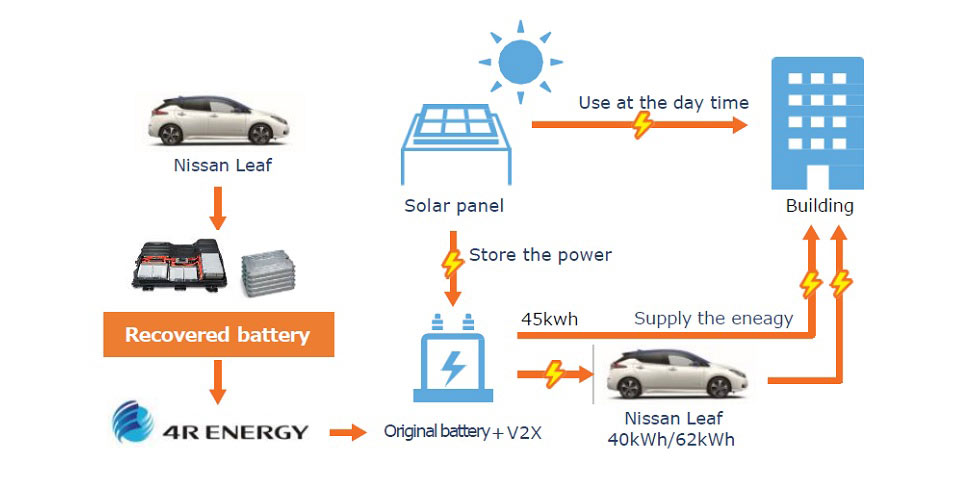 “Less than three months after the first-generation Leaf launched, the northeastern coast of Japan was struck by the March 2011 earthquake and tsunami,” said Ryusuke Hayashi, senior manager of EV operations at Nissan. “4.8 million households lost power, and Nissan provided 66 Leafs to the disaster-struck area.”

Now, Nissan’s program is getting formally implemented to prepare for future disasters. As Nissan explains:

By the end of March 2020, Nissan will have concluded 31 agreements with local governments and companies on EV use during and after natural disasters. The agreements make electric cars available for local communities and citizens to use as power sources at evacuation centers and welfare facilities in the event of outages caused by natural disasters. This includes vehicles owned by local governments as well as ones used for car-sharing services and test drives at Nissan dealerships.

Japan’s Association for Resilience this month honored Nissan and 4R Energy — a joint venture between Nissan and Sumitomo Corp. — for how the Leaf EV can be used during natural disasters.

Nissan’s so-called Blue Switch program began in May 2018. The program promotes the use of EVs to address issues related to disaster prevention, energy management, climate change, tourism, and population declines.