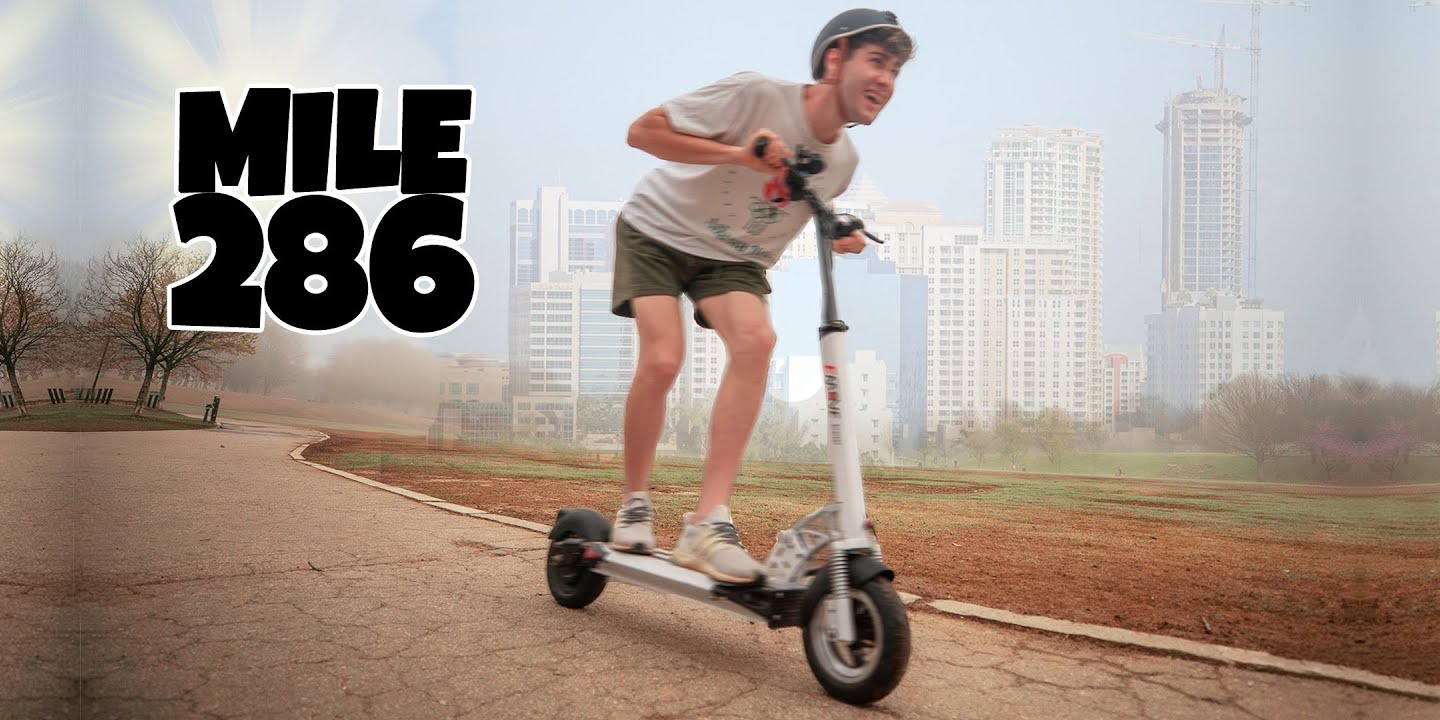 Bragging rights are common in the world of long-distance motorcycle rides, such as the “Iron Butt” for anyone who completes a 1,000 mile (1,600 km) ride in 24 hours. But one man might have just earned himself the equivalent “Iron Ankles” after taking a standing electric scooter on a 24-hour cross-country-style trip in Florida.

Atlanta-based Eric Decker is no stranger to long-distance travels on personal electric vehicles.

He previously rode a Boosted electric skateboard across California.

But this time he set his sights on a new form of popular electric transport: standing electric scooters. His goal was to start just north of Miami and ride 286 miles (460 km) to Daytona Beach and attend Bike Week — an annual gathering of motorcycle enthusiasts.

Eric chose one in the middle, the EMove Cruiser. It’s a 25 mph (40 km/h) electric scooter that we’ve previously reviewed and found to be a powerful, long-range scooter.

Check out our review video (above) of the scooter Eric used

In Eric’s case, he hoped to complete his ride without stopping to charge, so he began with three identical EMove Cruiser electric scooters. 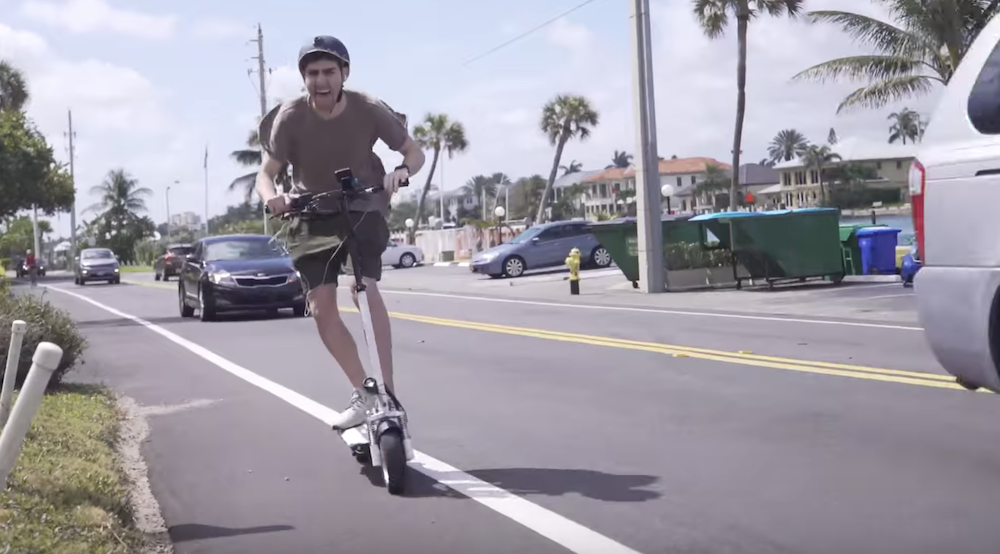 His team followed him in a support car with the plan to charge two scooters in the car using AC inverters. That would allow Eric to continue swapping out scooters for a freshly charged unit each time one ran dry.

The plan began to unravel when the team realized that the scooter chargers pulled too much power for the low-wattage AC inverters they had selected. Instead, they switched to Plan B and used hotel stops, gas stations, and anywhere else they could find with a 110V outlet to charge the scooters and keep Eric on the move. 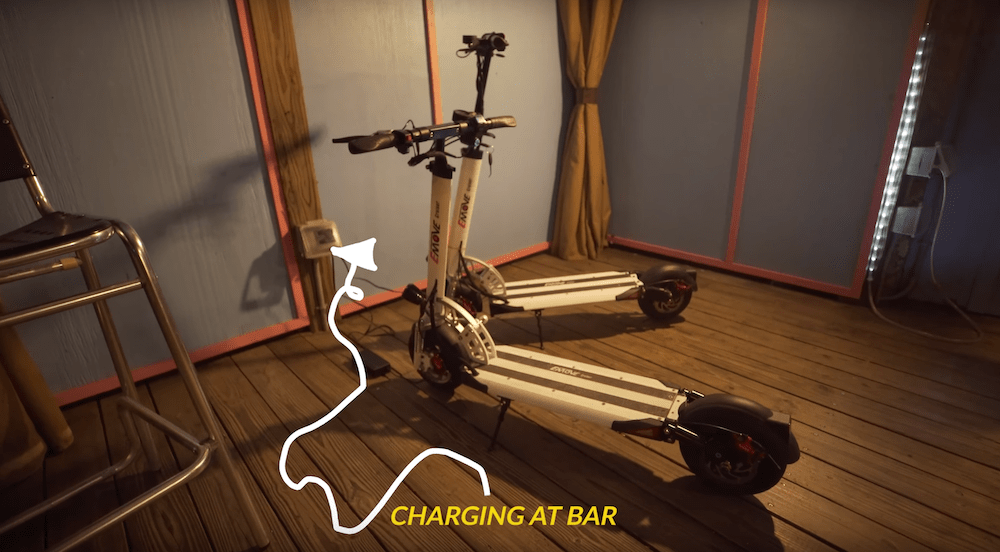 This form of charging is sometimes referred to as “guerrilla charging,” and is common in the world of long-range electric bicycle trips, though this may be one of its first documented cases in an XC scooter trip.

Unlike the wide network of Level 2 electric car chargers, electric bicycles and scooters can only charge on standard 110V outlets, known as Level 1 chargers. Riders usually seek out available outlets in public places, though often in areas where such outlets might not be intended for public use, such as behind vending machines. It is generally considered proper etiquette to ask business owners for permission to use their outlets, though most e-bikes and e-scooters can be recharged for around 5 to 10 cents of electricity, and so some riders prefer to just patronize the business and “call it even.”

I did my own 500-mile (800 km) electric bike trip up and down the east and west coasts of Florida in 2015. My charging method of choice was to use food stops to charge, often in a restaurant or cafe table next to an outlet, and I charged my batteries beneath my feet from high-power chargers while I ate and relaxed. I occasionally used gas stations to grab a quick charge, often getting lucky with an outlet by the ice machines. And no, the irony of charging electric bikes and scooters at gas stations is not lost on me.

Eric’s crew was asked to leave from at least one gas station after completing a nearly six-hour charge overnight, but it was enough to allow him to set out on the final leg of his 24-hour journey.

If you plan to attempt a long range trip like this, I highly recommend asking permission first when charging on private property. 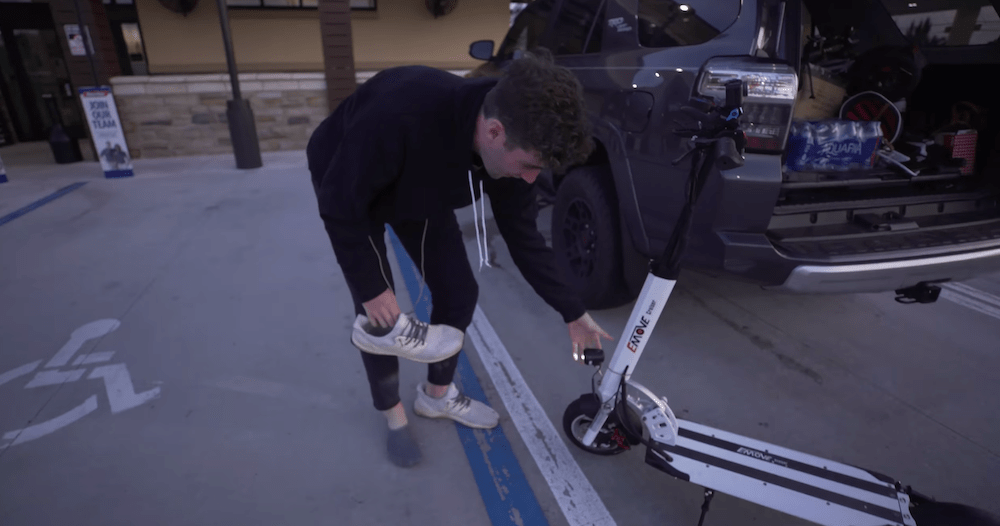 Ultimately, Eric arrived at Bike Week after covering 286 miles (460 km). That equates to an average speed of around 12 mph (20 km/h), though that includes everything from traffic lights to stops for sleeping, eating, and charging.

A visibly tired and sunburned Eric (see his video below) finished his trip with less than a ringing endorsement for that long of a scooter journey:

That was a living nightmare that I never wish to relive. My body hurts so bad.

While I enjoy riding electric scooters, I wouldn’t recommend a trip of this length, either. But as a commuter option, electric scooters can be a powerful form of alternative transportation. And if they can complete a 286-mile journey, they can surely take most people to work or school each day.

If you want to pick up the long-range, full-suspension electric scooter that Eric used, you can find it from Voromotors. They’ve always been generous to Electrek’s readers, offering nearly $100 off this model of scooter when using the code ELECTREK at checkout. They also stock a slightly less intense (and more affordable) version of the scooter, known as the EMove Touring, which we also reviewed. And the coupon code works for that scooter, too!