Volkswagen’s settlement over its diesel emissions scandal earmarked $2 billion to be invested by Electrify America. California received $800 million from that pool, requiring 35% of the funds to be spent on low-income and disadvantaged communities.

Last year, I sat in on a meeting of the California Air Resources Board that became contentious because some board members from rural districts thought Electrify America wasn’t doing enough to support EV charging in remote counties. Those members accused Electrify America of only spending $2 million on rural charging.

But EA pegged the spending at closer to $50 million, based on charging stations positioned at Target and Walmart stores and other locations along highway routes.

The new $2 million investment in Envision Solar stations announced today reflects a step by Electrify America to make sure charging is available to rural communities, including in the Central, Coachella, and Imperial valleys. Those are not places where EV adoption has been popular.

Electric vehicles accounted for about 8% of car sales in California in 2019, but EV penetration is still less than half a percent in rural areas. Electrify America’s deployment of our rapidly deployed, solar-powered EV charging products will help the state get closer to its goal of 250,000 charging stations by 2025 while putting fully emissions-free driving within reach of those who need it most. We look forward to continuing to support Electrify America’s efforts now and in the future. 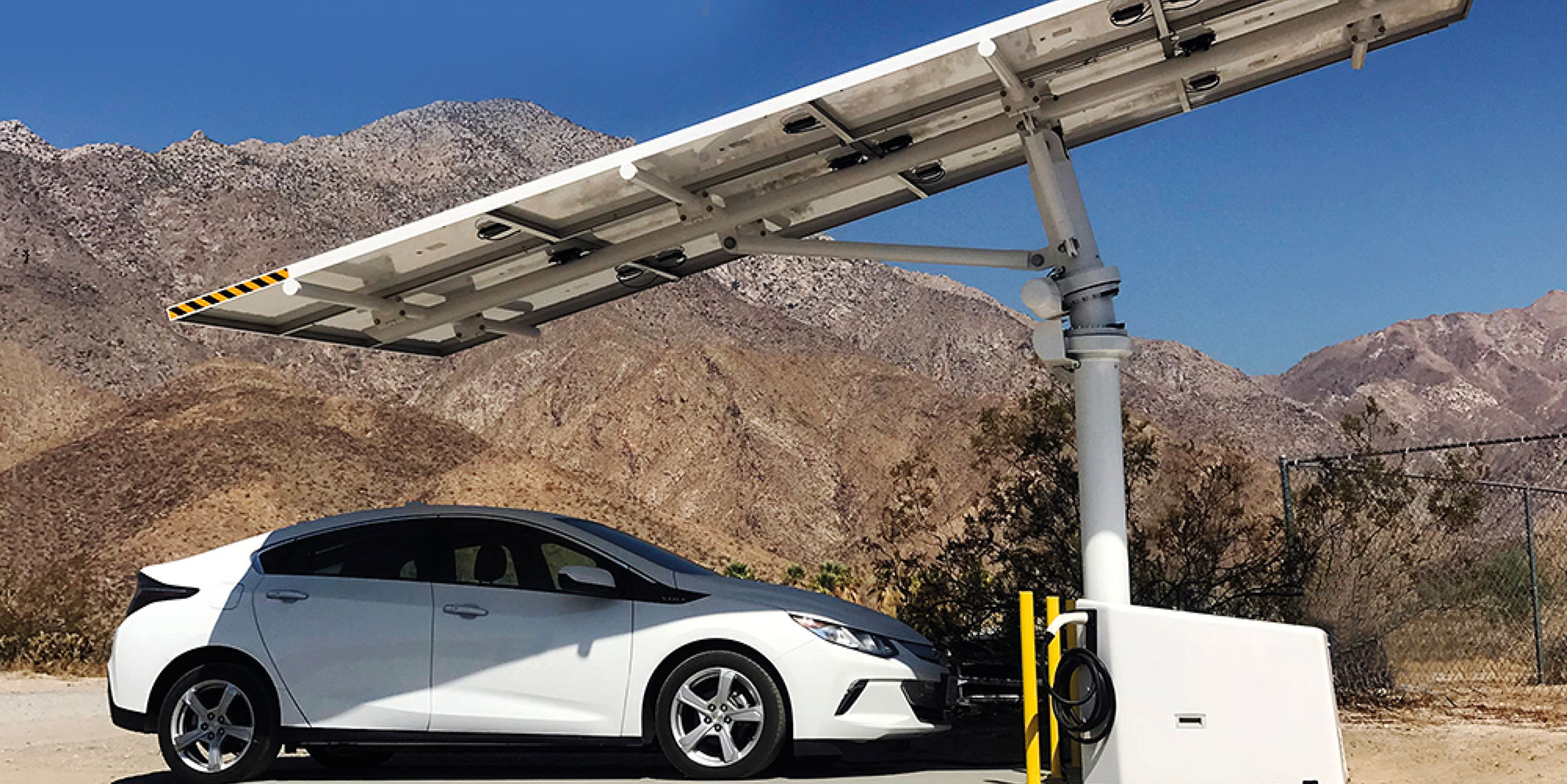 Two customers can charge their EVs at the same time. The unit’s photovoltaic system produces 100% renewable energy. The batteries mean you can use that clean energy day or night.

Electrify America will dispatch 30 standalone EV ARCTM 2020 stations to “carefully selected areas in rural California.” The EV ARCTM 2020 can be deployed quickly and without disruptive construction. Deployment takes a few minutes, and the chargers can fit easily inside a standard parking spot. 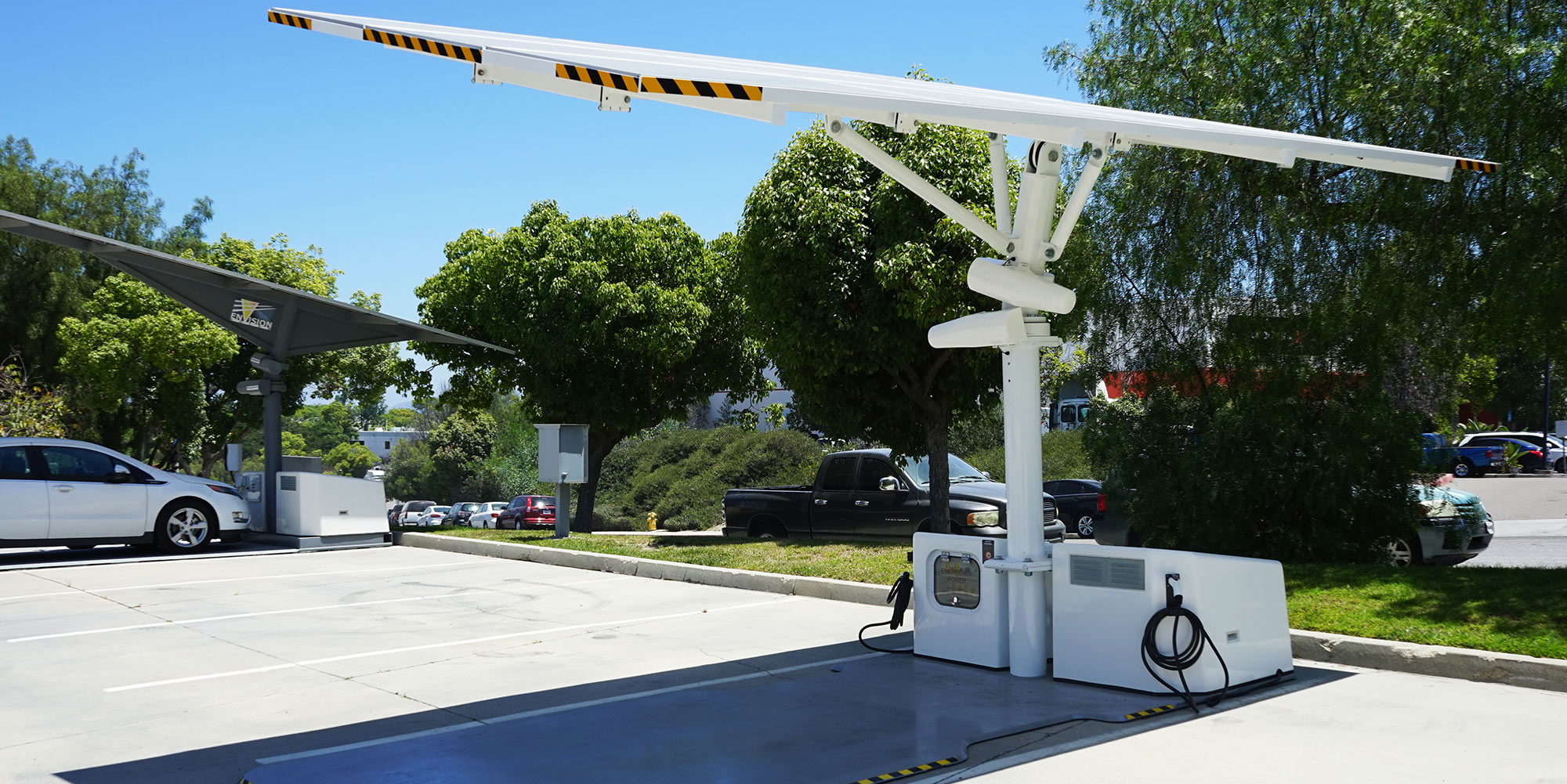 Envision Solar says that the EV ARC has been deployed in 82 municipalities across 16 states and 3 countries. The company was founded in 2006.

In 2017, we posted about Envision Solar’s deployment of 5 “Solar EV ARC” stations in Pittsburgh. The combination of solar, batteries and EV charging in a single package is intended to provide electric-car refueling even in remote areas without a grid connection.

The company also makes a “Solar Tree,” which is delivered as a kit that’s assembled by customers.

VW’s Dieselgate settlement with California requires that it serve all of the state’s citizens. That includes people in rural communities.

Few people expect rural drivers, who often drive longer driving distances, to be the biggest part of the next wave of EV buyers. Nonetheless, it’s a laudable goal to make zero-emission cars as equitable as possible. In November 2019, California made EVs with a price exceeding $60,000 disqualified from the state’s $2,000 clean-vehicle rebate.

Basic math suggests that each station costs about $65,000, which is not cheap. But Electrify America needs to demonstrate that it’s meeting the state’s requirements.

Off-the-grid, easily deployable Level 2 charging stations powered by the sun provide greater flexibility for where to locate (or later re-locate) EV charging stations. Permanent stations can take months to deploy and cost several hundred thousand dollars to establish, as we learned in our interview with Electrify America in November.

That said, L2 chargers are not fast. They add about 20 to 25 miles in an hour. In remote areas, there are not a lot of things to do while waiting for those miles to add up. Finding attractive and truly helpful places to charge for a couple hours will be a challenge.