Starting December 3, California EV buyers purchasing vehicles with a price exceeding $60,000 will not qualify for the state’s $2,000 clean-vehicle rebate. The change will eliminate rebates for the Audi e-tron and Jaguar i-Pace — as well as many models from BMW, Mercedes-Benz, and Tesla. Plug-in hybrids with less than 35 miles of all-electric range will also become ineligible.

The new policy is an effort by the California Air Resources Board to shift support from wealthy buyers to low- to moderate-income drivers. Rebates for the more affordable EVs that still qualify will be reduced from $2,500 to $2,000. The rebate for plug-in hybrids will be reduced from $1,500 to $1,000.

Low- to moderate-income buyers will continue to receive higher rebates of $4,500 and $3,500, respectively, for EVs and PHEVs. Increased rebates for lower-income residents have been in effect since 2016. For example, a family of four that makes less than $77,250 is eligible. The exact figure is determined based on household size and incomes less than or equal to 300% of the federal poverty level.

The impact of the change on EV-buyer demographics remains to be seen. It will become a litmus test, because California is by far the biggest EV market in the United States. In 2016 and 2017, California represented 50% of EV sales in the US. In 2018, California’s share of national EV sales slightly dropped to 47% in 2018.

The new rules go into effect on December 3. Purchases made before that date operate under existing rules, with.buyers having 18 months to apply for a rebate. 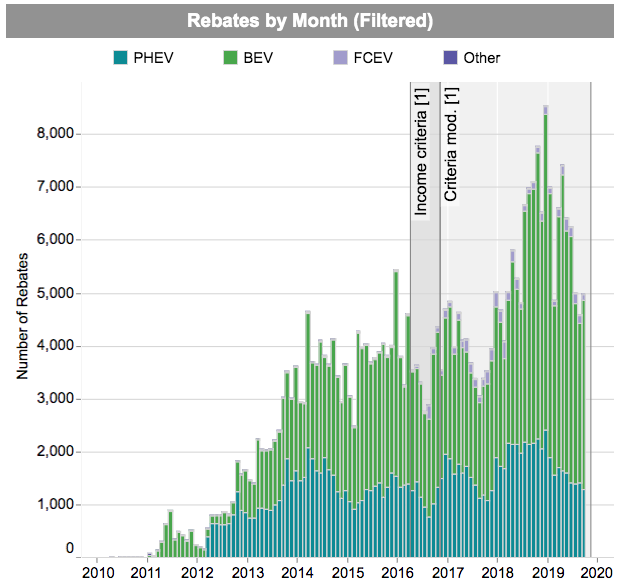 The bill would have required CARB to create a rebate structure to support the deployment of 5 million zero-emission vehicles by 2030. The proposal, estimated to cost $10 billion over a decade, would immediately boost rebate amounts.

Ting told the San Francisco Chronicle that he plans to revive the issue next year. He said that he persuaded Governor Gavin Newsom’s administration to study how the rebate program can be changed to help California achieve the 5 million ZEV target.

A $500 reduction in the EV rebate is unlikely to have a significant impact on consumers buying EVs costing below $60,000. If there’s any impact, which is not certain, it will be on wealthier buyers purchasing more expensive electric models.

The website managed by the Clean Vehicle Rebate Program indicates that about 354,000 rebates have been issued as follows since 2011. About 115,000 of those rebates helped purchase luxury vehicles from Audi, BMW, Jaguar, and Mercedes-Benz. But the vast majority of them (95,926 out of 115,000) was for Tesla buyers.

Since March 2016, when the rebates increased based on income, only 16,614 rebates were issued to low/moderate-income buyers.

In the tony 94025 Palo Alto zip code, buyers received more than $2.4 million in rebates. Meanwhile, two economically challenged Sacramento zip codes that combine to form a similarly sized population received just $163,000 in state support. (These numbers are from January 2019, when I was researching this story in the New York Times: “Are Electric Cars Only for the Rich?”)

Soon after the new rules are instated on December 3, many Tesla buyers will no longer benefit from either California or federal incentives. Tesla buyers currently qualify for $1,875 federal EV tax credit, but that will be entirely phased out starting on January 1, 2020.