The prestigious medical journal the Lancet has launched a 2020 campaign on child and adolescent health, stating, “It’s time to put children at the heart of our vision for a sustainable humanity.” Its study, “A Future for the world’s children? A WHO-UNICEF-Lancet Commission,” states:

Governments must harness coalitions across sectors to overcome ecological and commercial pressures to ensure children receive their rights and entitlements now and a liveable planet in the years to come.

I think that the ecological emergency that we face across the planet is absolutely the most important threat to the long-term health of children today.

We have to give [children] a voice.

You can watch his full explanation below on why the world needs to redirect its focus on the well-being of children:

Meanwhile, the Union of Concerned Scientists (UCS) is also advocating for children’s health. In a blog by Derrick Z. Jackson, a UCS fellow in climate and energy and the Center for Science and Democracy called “Let the Children Breathe Particulate Matter: How the Trump Administration’s Polluted Policies Are Hurting Children.”

Jackson gets right to the accurate point:

Let the children suffocate. That is the vicious message from President Trump in his proposed budget cuts for the Environmental Protection Agency for fiscal year 2021.

As the Union of Concerned Scientists… issued its new report, “Endangering Generations: How the Trump Administration’s Assault on Science Is Harming Children’s Health,” the White House announced its desire to slash the EPA’s funding from $9 billion to $6.7 billion and cut staffing down to 12,600. There were 17,000 full-time staffers in 2012.

Air pollution is one of the worst threats to children’s health. Fine particulate matter is responsible for more than 100,000 deaths a year in the US and a societal cost of around $900 billion. In 2018, the White House disbanded the scientific advisory committee for particulate matter, but the UCS “helped reconvene members of the disbanded panel, which issued a report in October that found that the current standards ‘are not protective of public health.'”

Read Jackson’s post for personal accounts of how pollution is affecting children in one southeast Chicago neighborhood. They are dealing with elevated levels of manganese and lead due to nearby industry.

The photo above is of Grayling Stefek, 5, in Flint, Michigan, in January 2016. He was being tested for lead after it was found in the city’s drinking water.

Everyone has a favorite internet browser, or we just revert to one out of habit. But how about switching to a browser that’s not only secure and private, but also benefits our oceans?

Ekoru.org gives 60% of their revenue to both the Big Blue Ocean Cleanup, which removes plastic waste from our oceans, and Operation Posidonia, led by the University of New South Wales in Australia, which combats climate change by replanting ocean seagrass.

Ocean seagrass captures carbon pollution at a rate of up to 40 times faster than tropical rain forests.

Ekoru was set up by a husband-and-wife team with backgrounds in software development and marketing — you can learn more about Ati and Alison here.

Search funny cat videos and help our oceans — what’s not to like about that combo? Every small step makes a difference. (And if you just can’t break your Chrome habit, then Ecosia, which uses profits to plant trees that combat pollution, can be added as an extension to Chrome.) 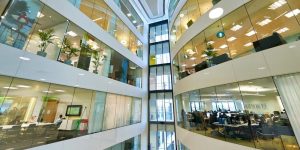 On January 29, Electrek reported that the Guardian became the first major news outlet to ban fossil-fuel ads. So what that means by default is that other news outlets haven’t stopped running fossil-fuel ads — and Amy Westervelt at the Nation pointed out that “some media companies are creating, not just running, misleading climate ads.”

It’s worth reading Westervelt’s article in full, which you can access by clicking on this link. But here’s an excerpt to give you a glimpse into a practice that needs to stop — the New York Times, Vox, NPR, and the Washington Post, we’re looking at you — and why. The Post explained their climate-changing fossil-fuel complicity in a statement to the Nation with the “separation of church and state” argument (that’s editorial and advertising to non-media folk), but it’s no excuse. The Nation asks:

The CPB, NPR, the New York Times, and the Washington Post all argue that there is a firewall between their advertising and their editorial departments; their journalists are not influenced by underwriters; and their sponsors have no input on news coverage. But what about the influence such advertising has on readers and listeners, especially when the ads are presented within news and science programs without caveats about the claims they make?

Climate change is the defining story of our time. The public needs to know that the news outlets telling that story are not taking their cues from the very corporations that caused the problem and continue to lie about it today.

Why is water conservation important? Because it helps to preserve the environment. One, it saves energy, because it takes energy to pump it into your home. Plus, there is a finite amount of freshwater on Earth. Different stages of the water cycle can take a long time to complete. And bonus: it’ll cut down the cost of your water bill.

So here’s a quick little fix to conserve water in your home that we can all do, and that’s to shower more mindfully. Or, to put it bluntly, take a quicker shower. Showers are more eco-friendly than baths, but they still use a lot of water.

Here’s a video made for kids about water conservation, but it’s really informative for adults too — I learned a lot — so have a watch: 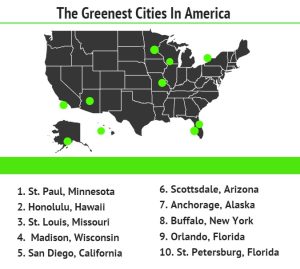 Startup careers site Zippia not only looks at jobs, but also at livability and other life-choice factors. The site just released a study where it ranked 99 US cities on five different environmental factors: walkability, less car ownership (and thus less burning of fossil-fuel pollution), shorter commute lengths (ditto), tons of waste per person, and parkland per 1,000 people.

(The above five criteria are all important, but next year, I hope to see the inclusion of green energy use in Zippia’s list of criteria, too. For example, San Diego has the most solar panels per capita, with 10% of homes having solar panels.)

Zippia ranked St. Paul as No. 1, where they throw away 12 tons of waste per person, and commutes are short. (New York City is the most walkable in general.) Honolulu is No. 2, because people use public transport and parks are plentiful. And third is St. Louis, because it also has a low amount of waste per person and short commutes.

To see how your city or metropolitan area fared, click here.

Airlines such as Delta and Easyjet are spending big money to purchase carbon offsets. And if you have to fly frequently for work — or just fly at all — then you can offset your own personal flight emissions, too.

App in the Air (AITA) helps fliers track their travel itineraries. Now AITA has partnered with One Tree Planted, whose slogan is “One dollar. One tree” and plants trees globally. AITA has added a carbon calculator that considers everything from the aircraft model to the cabin class, and it now links to One Tree Planted to offset the carbon emissions that fliers create.

Travelers who plant trees can earn a green-certified in-app badge, track their current balance, and compete against their friends on a “green” leaderboard.

Whether or not our users choose to offset their flights, we automatically plant one tree per booking in the app. App in the Air flyers planted over 10,000 trees in the closing months of 2019 alone – I’m eager to surpass this number in 2020 as we roll out the program across our global userbase.

Even eco-conscious people need to travel sometimes! It’s great to know that App in the Air makes it simple for travelers to plant a tree and have a positive environmental impact for nature, people, and biodiversity.

This is a super-easy thing to do. Let’s plant those trees while the aviation industry tries to figure out alternatives to just purchasing carbon offsets.

Surfers at Rockaway Beach in New York City are opposing a proposed gas line that would run fracked gas under the seafloor from New Jersey to Rockaway. They state:

We are opposing this project because of negative impacts to our environment and local economy, Williams Transco’s safety record, and continued dependence on fossil fuels.

You can watch the surfers’ video here: