Unagi electric scooter review: Is it weird that I find this scooter so sexy?

It’s true, there is a pile of electric scooters out there. And it seems that a new one is popping up every week. So what can make an electric scooter stand out these days? For the Unagi Model One E500, the answer is simple: Appeal to premium consumers.

This scooter is simply beautiful and has the high-quality craftsmanship to match.

I reviewed the first Unagi electric scooter on the day it was released nearly a year and a half ago.

I was impressed way back then, and now I’m loving the updated E500 even more. It’s not without its deficiencies, which is true of every electric scooter, but it definitely brings a lot to the table.

I’ve gotten a chance to put some miles on the updated dual-motor scooter and I can tell you that it performs better than ever. And it still looks just as good as when it was young! 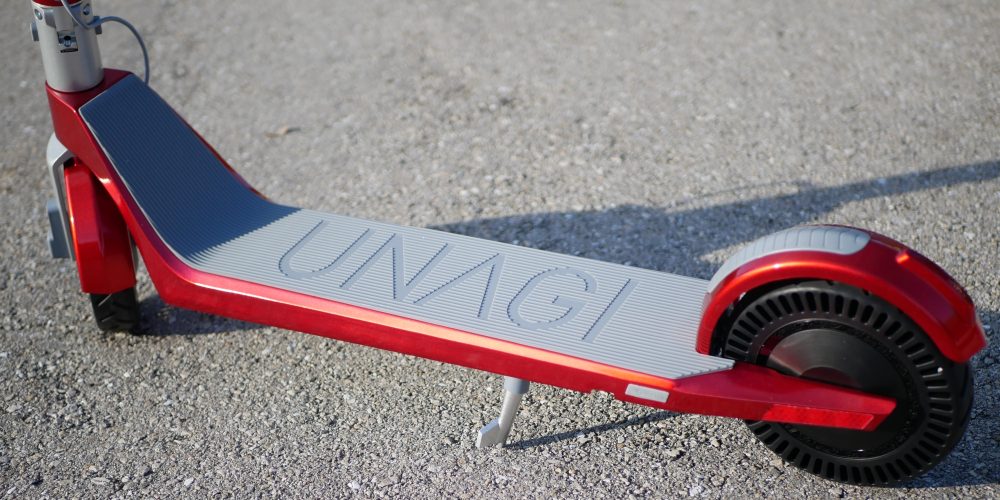 A rolling work of art

The Unagi Model One E500 is simply a beautiful scooter.

While other scooters have simple tubular stems, Unagi uses a sweeping stem made from Japanese carbon fiber. It’s downright elegant.

While other scooters have cheap housing for their displays, Unagi uses machined magnesium and it looks like it houses a glass display from a luxury car.

The whole thing just looks and feels like a step above everything else out there. I know this is the worst cliche I could use, but I’m going to say it anyway: If Apple designed a scooter, this would be it.

Ok fine, but how well does it work?

Alright, let’s get past the looks. Yes, it’s gorgeous. But how well does it ride?

To put it simply: It rides pretty darn well, though it’s not perfect.

The dual motors are quite powerful and give you plenty of fun acceleration. The regen brakes are also more than enough to bring you to a quick stop, even without a hand brake (though you also get a foot brake for emergencies).

But the main area I’d ding the Unagi E500 on is suspension. There’s no suspension and the tires are only somewhat forgiving. The hollow voids will help a bit by deforming against road irregularities, but they can only do so much. You’re going to feel sidewalk cracks, brick paths and other rough surfaces more than on scooters with suspension. If you have a fairly smooth path of bike lanes or paths on your commute, you likely won’t notice the lack of suspension. But if your streets look like the surface of the moon then things are going to get bumpy for you.

If I’m being honest though, that’s the only area I can nitpick about the Unagi. Otherwise, the thing is a beautifully designed machine that works great. 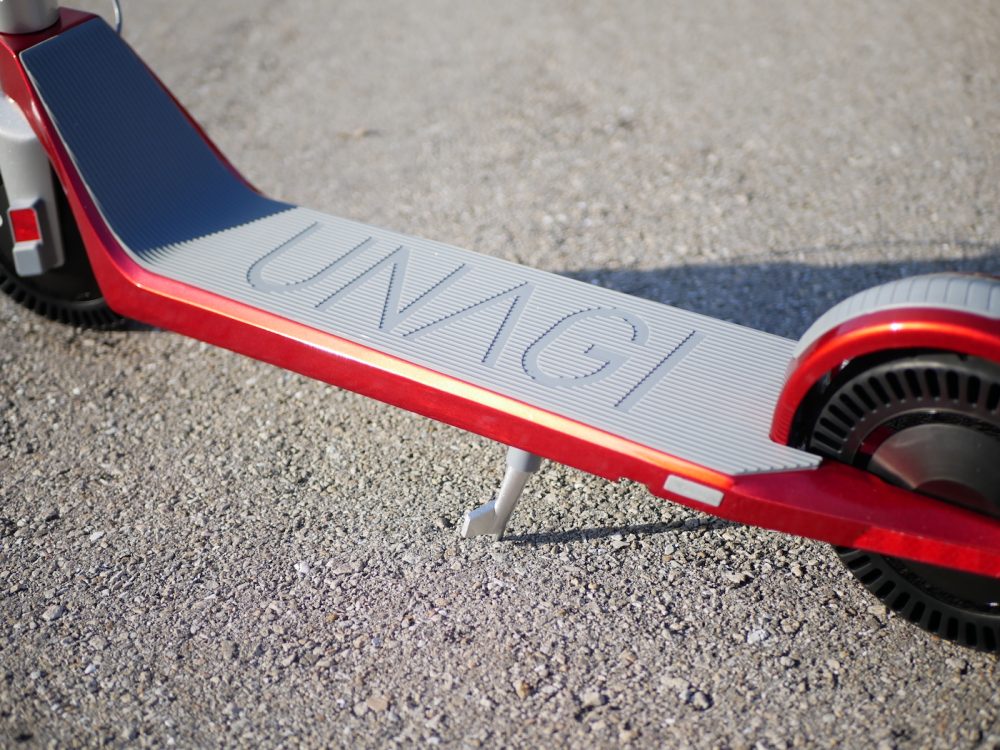 Take the folding mechanism, for instance. I’ve never seen a simpler or more effective scooter folding mechanism. As a mechanical engineer, I’m impressed. And as a scooter rider, I’m in love.

Most scooters require you to wrestle with them to get the stem to fold. Even the good ones are hard to fold well repeatedly without a lot of practice. But a toddler could fold the Unagi. You simply press down on the button at the folding mechanism. That’s it. Seriously. One press with a single finger will do it.

Depressing the button causes the stem to fold, where it then locks in the downward position. And at just 26 lb (12.5 kg), the scooter is light enough to carry around easily while in the folded position. 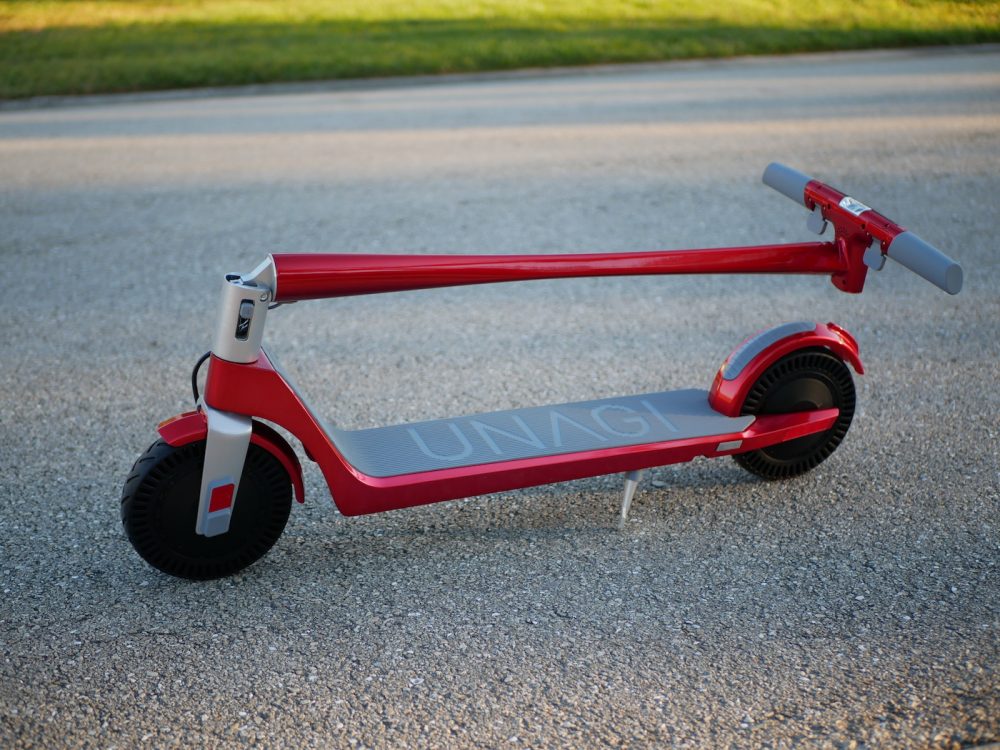 The speed and power aren’t going to worry the makers of the Dualtron or other high power dual motor scooters, but the Unagi feels plenty strong for day to day commuting. A top speed of 17 mph (27 km/h) is about as fast as I want to go on a non-suspension scooter anyways. I live in a flat city so I didn’t get to do much hill climbing other than small hills. Those small hills caused a slight speed drop, but the dual motors felt like they were handling it pretty well. With 500W of peak power from each motor, the Unagi should be good to go on most small and medium hills. Large hills will likely still be tough for it, but that’s true of just about every electric scooter outside of the monsters that cost twice as much.

Speaking of price, the Unagi E500 will set you back $990, which certainly raises eyebrows compared to budget scooters that cost a quarter of that price. But you have to remember that the Unagi is a premium electric scooter. It’s basically a luxury electric scooter. There’s a market for ultra-budget scooters, but I imagine it doesn’t overlap very much with the market for an Unagi. This is simply a scooter on another level and designed for riders that value aesthetics and build quality over rock bottom prices.

Add to that Unagi’s 30-day no-risk, no-questions-asked return policy as well as its reputation for great customer support, and you’ve got all the fixings for a premium price to match this premium scooter. 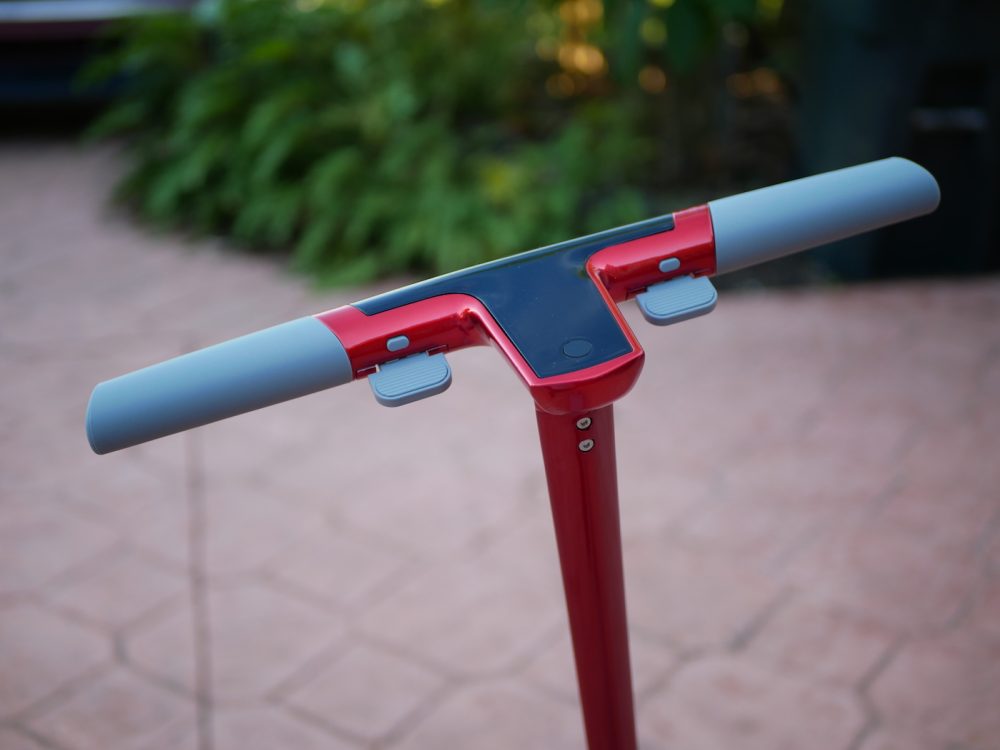 If I could make just one more change on the scooter, I might have tried to squeeze more battery into it. A 260Wh battery isn’t tiny, but it isn’t large either. It’s around the same size as the batteries in budget scooters, and it means you’re only getting the advertised 15 miles of range in power level 1, which limits your speed. In power level 3, expect to get closer to 10-12 miles of range in reasonable real-world conditions. That’s still enough for most people’s inter-city needs, but might be a damper if you’ve got an exceptionally long commute or can’t charge at work.

But considering there’s really only one scooter like the Unagi on the market, if you want a luxury scoot then Unagi is probably your best bet.

What do you think of the Unagi Model One E500 electric scooter? Let us know in the comments below!