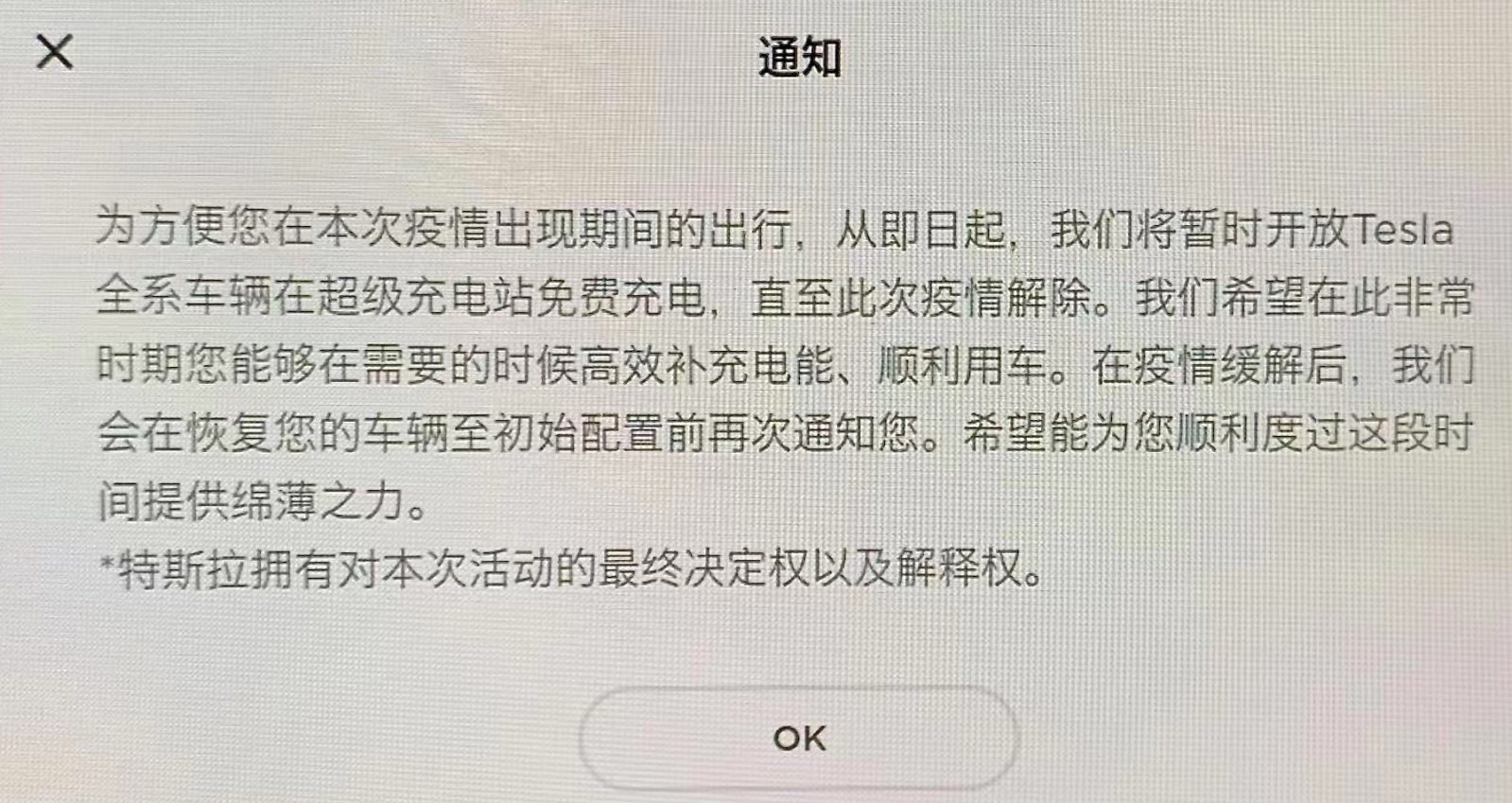 Tesla China is notifying customers that, due to the coronavirus outbreak currently happening in that country, all Tesla vehicles will have free supercharging to facilitate travel until the outbreak is resolved.

The coronavirus outbreak out of Wuhan, China, has made global news, with several thousand confirmed cases of the respiratory disease.

Not much is known yet about the disease, but there is significant fear of transmission, particularly in public places. Steps have been taken to mitigate the possibility of transmission in public spaces, including quarantines and the shutting down of public transportation in some cities. Lunar New Year celebrations were canceled in many parts of the country as well.

Without public transport, people might travel in private cars, both to reduce risk of transmission of disease, and because there’s no other way to get around. Of course, if your entire city is quarantined, supercharging isn’t going to help much.

Tesla decided to notify users around China that “during this extraordinary period,” they will make supercharging free in China until the outbreak passes.

In order to facilitate your travel during the outbreak of the epidemic, from now on, we will temporarily open all Tesla vehicles to charge at the supercharging station for free until the epidemic is resolved. We hope that during this extraordinary period, you will be able to efficiently replenish electricity when needed and use the car smoothly. After the epidemic eases, we will notify you again before restoring your vehicle to its initial configuration. We hope to provide you with a modest force. Tesla has the final decision and interpretation of this event.

This is the first time Tesla has activated any sort of disaster response in China, but the company has done similar things before when disaster has struck elsewhere.

When Hurricane Irma hit in 2017, Tesla made supercharging free and removed the caps from software-limited battery packs, giving owners a little extra range to get away from the hurricane’s path. Tesla has done a similar thing for California wildfires, and also for hurricanes Florence and Dorian.

This can prove useful in the event of a disaster, especially since gas cars often prove to be a liability after hurricanes.

They’ve even set up an automatic “Storm Watch” setting for Powerwall owners that will instruct Powerwalls to charge to maximum capacity to provide backup power in the event of power outages.

We aren’t epidemiologists here (and, most likely, neither are those of you warming up your keyboards to tell us all what a good or bad idea this is), so we don’t know if this is going to help at all, but it’s a nice gesture nonetheless.

We can imagine how this might help some owners. They might want to head out to a rural area with less people around in the hope that there’s less chance of catching something, or some owners might need to get themselves to a hospital quickly without using public transport. Or maybe they’re outside the areas with the highest transmission rates, but still just don’t want to take the train for the next couple weeks, just in case.

As a car company, there’s not much Tesla can do to help mitigate disease, but maybe this will make a couple owners’ lives a little easier for the time being.  So that’s nice regardless.