Conservative columnist Stephen Moore railed against federal electric-car tax credits over the weekend. In the Washington Times, Moore laid out his best arguments against bills designed to extend the $7,500 tax credit. He said EV credits are a tax cut for the rich that primarily benefit billionaire Elon Musk, and is a program rampant with fraud. The already diminished credit for Tesla vehicles disappears completely on January 1.

They are head cheerleaders for a bill that would extend and even expand tax favors padding the pockets of mostly wealthy Americans who can afford to buy pricey Tesla and GM electric vehicles. The price tag for taxpayers could reach $16 billion for this bill.

However, the Driving America Forward Act was a bipartisan Senate bill introduced in April. The stalled bill would extend the EV tax credit, but not permanently. Each automaker would benefit from a $7,000 tax credit for an additional 400,000 vehicles on top of the existing 200,000 vehicles eligible for $7,500 tax credits.

A competing Republican measure by US Senator John Barrasso (R-WY) would eliminate the tax credit for electric cars and institute a new tax on electric vehicles, supposedly to make up for not paying taxes at the gas pump. Who’s behind that bill? You guessed it. E&E News reported:

Representatives of the oil industry — including those from Marathon Petroleum Corp., the nation’s largest refiner — spoke out against the tax credit, according to people in the room. The attendees ultimately voted to support a resolution calling for Congress to scrap the popular subsidy.

Donald Trump also threatened to kill the tax credit in retaliation for GM’s plans to idle four US plants.

Schumer’s involvement came in October when he unveiled the Clean Cars for America plan. He wrote in the New York Times: “The goal of the plan, which also aims to spur a transformation in American manufacturing, is that by 2040, all vehicles on the road should be clean.” He said the plan would create tens of thousands of new, well-paying jobs in the US.

The list of groups who support an extension of the EV tax credits includes utilities, charging networks, environmental organizations, and the three auto companies that have sold the most EVs: Tesla, General Motors, and Nissan.

The most problematic of those automakers is General Motors, as Detroit News pointed out last week:

The Detroit manufacturer is one of the loudest voices lobbying for an extension of a federal tax credit that provides up to $7,500 to buyers of electric vehicles, but GM has angered some Democrats by siding with President Donald Trump in a fight with California over fuel-economy regulations. 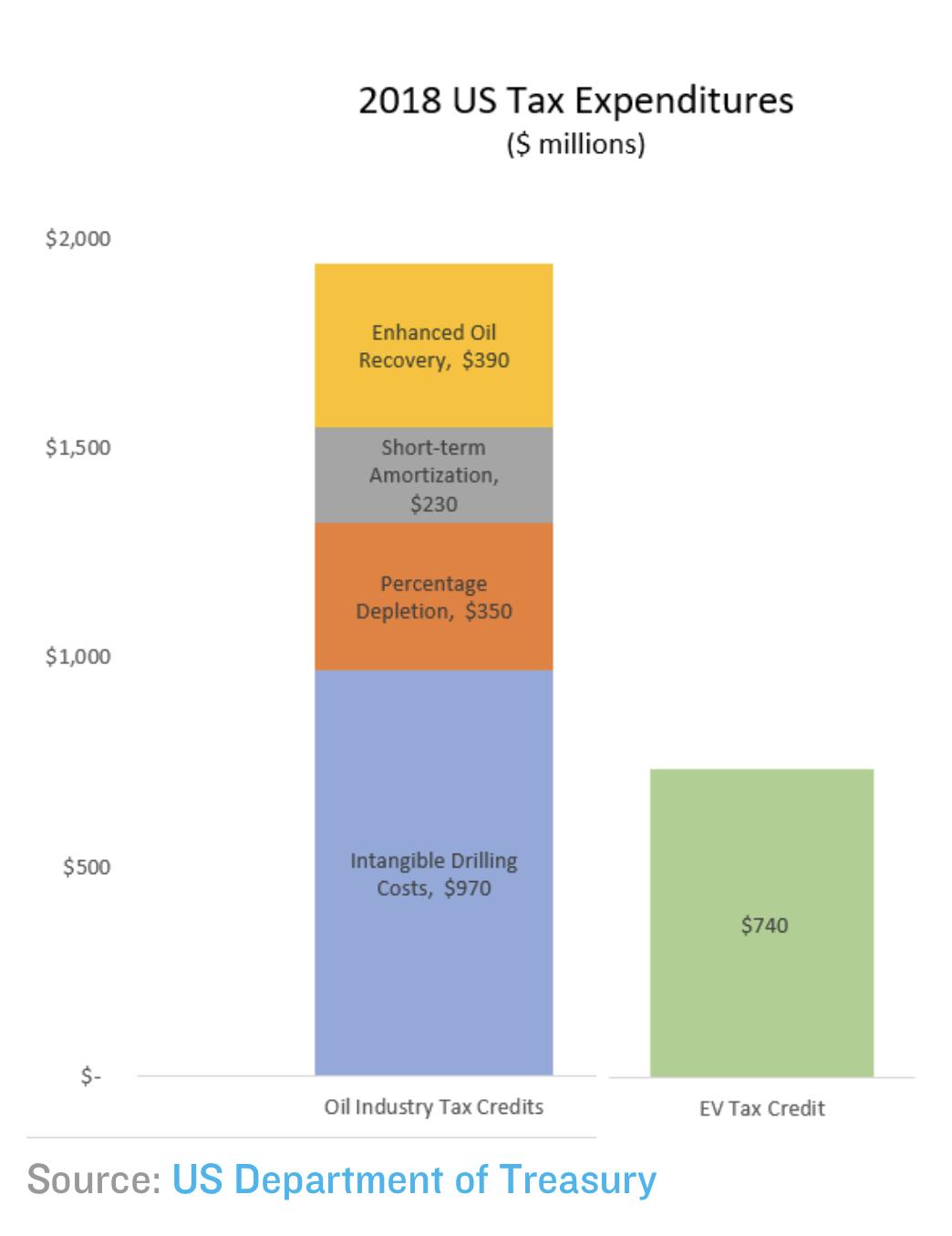 Meanwhile, Dan West, senior advocate for government affairs at the Natural Resources Defense Council, last month explained that government subsidies supporting the fossil-fuel industry — representing many of the wealthiest companies in the world ­— dwarf the value of EV subsidies.

When compared to the permanent tax credits enjoyed by the oil industry, the temporary EV tax credit is clearly a better deal for the country. The oil industry knows this, and that is why it is lobbying so hard against EVs right now.

Between 2019 and 2028, the total tax benefits for oil and gas production is expected to cost the Treasury $27 billion over the next 10 years.

The International Monetary Fund pegs worldwide subsidies for oil production and distribution at $5 trillion per year and $649 billion in the US. This number includes external costs, such as health impacts from air pollution.