Tesla Model X has been named a ‘standout performer’ by Euro NCAP in their latest batch of safety crash tests — getting a near-perfect score for adult occupant protection.

In 2017, the Tesla Model X officially became the highest safety-rated SUV by a significant margin with 5-star ratings in every safety category in NHTSA’s tests.

Tesla is known to keep improving on its vehicles all the time and not waiting for new model years.

Now Euro NCAP has tested the latest version of Tesla’s Model X and named it “the standout performer of this round” of tests with a 5-star rating under the European standards.

They commented on its safety testing of the Tesla Model X:

The standout performer of this round is undoubtedly Tesla’s Model X, scoring 94% for Safety Assist, the same as the Model 3 scored early this year. This makes the two Teslas the best performers in this part of the assessment against Euro NCAP’s most recent protocols. The recently updated Model X also achieved an impressive 98% for adult occupant protection, making it strong contender for Best in Class this year. 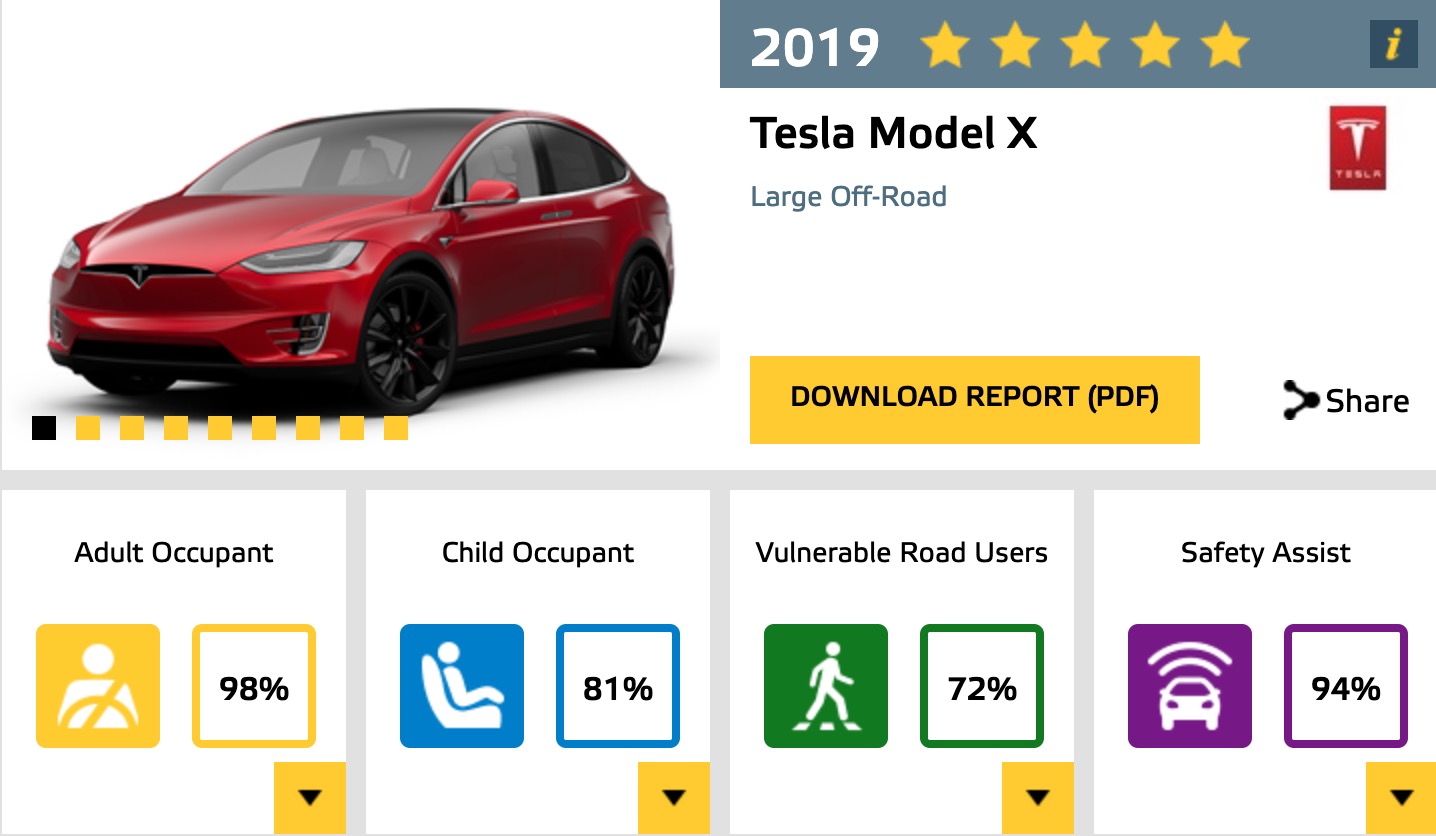 The passenger compartment of the Model X remained stable in the frontal offset test. Dummy readings indicated good protection of the knees and femurs of the driver and passenger. Tesla showed that a similar level of protection would be provided to occupants of different sizes and to those sitting in different positions. Protection was rated as good for all critical body areas for the driver. This was also the case in the full-width rigid barrier test, and protection was good or adequate for the rear passenger. In both the side barrier and the more severe side pole tests, protection of all critical body areas was good and the car scored full points in both of these tests. Tests on the front seats and head restraints demonstrated good protection against whiplash injuries in the event of a rear-end collision. A geometric assessment of the rear seats also indicated good whiplash protection. The standard-fit autonomous emergency braking (AEB) system performed well in tests of its functionality at the low speeds at which many whiplash injuries occur, with collisions avoided in all test scenarios.

Tesla claimed that they couldn’t “flip” the Model X during internal crash testing and they said that they broke their machine when trying to test the roof strength.

We have also seen some real-life examples of the Model X’s safety level.

Last year, a Tesla Model X owner said the vehicle “saved” him and a passenger after a plane crashed into his electric SUV. We have also previously reported on another Model X owner who said that he “wants his family back in a Tesla” after surviving a severe crash.