Monday Motorbikes has been around the block a few times with electric mopeds. And now the company is back with its latest (and most affordable) offering known as the Gateway, which just went on sale.

The latest Monday Gateway model harkens back to the golden age of mopeds.

The e-bike is available in two different speed and power levels, offered as the Gateway and the Gateway Booster.

The Gateway sports a 500W rear hub motor, offering it a top speed of 28 mph (45 km/h). The Gateway Booster gets a beefier 1,200 W rear hub motor and tops out at 35 mph (56 km/h), though that higher speed is available in a user unlockable off-road mode. Of course it’s mostly the honor system keeping riders from unlocking off-road mode while they are still on the pavement. 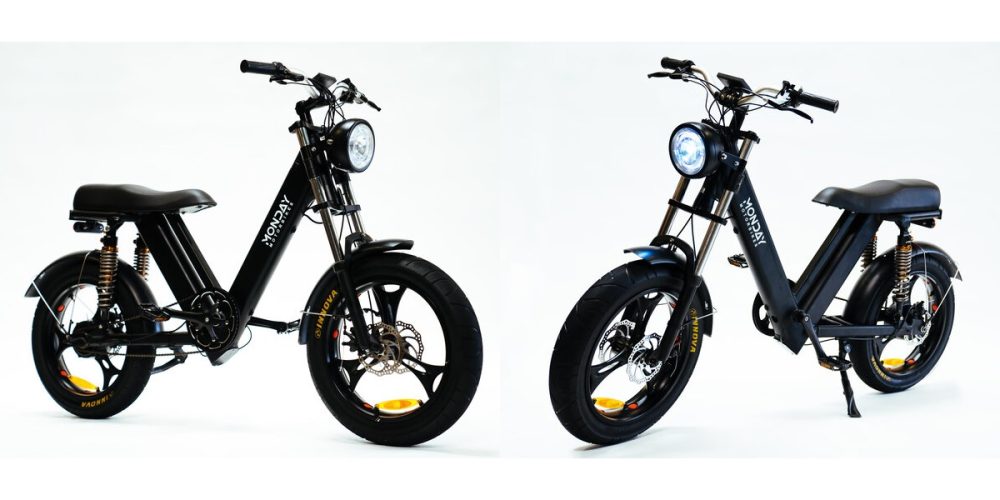 The company is using Indiegogo to offer pre-orders. While we always advise a bit of caution with Indiegogo and crowdfunding campaigns, Monday Motorbikes has a better track record than most. Not only is the company an established brand, but they’ve already run a successful Indiegogo campaign in the past, which is always a good sign when it comes to crowdfunding.

A growing trend of moped-style electric bikes and scooters

The Monday Gateway and Gateway Booster appear to be part of a growing trend we’re watching in the electric bicycle industry. Manufacturers have been gravitating toward e-bikes with wider tires, longer bench seats, moped-style frames/suspension, and motorcycle-level LED lighting.

The inclusion of rear foot pegs on many of these models allow for a second rider to take the pillion position, increasing the utility of these two-wheeled EVs.

Recent examples include the Juiced Scorpion from Juiced Bikes and the RadRunner from Rad Power Bikes. Electrek‘s publisher Seth Weintraub got a chance to take a spin on the former, while I’ve had the pleasure of reviewing the latter (see video below). Quick tip: Juiced Bikes and Rad Power Bikes are both offering huge Black Friday sales that are already live.

But it’s not just retail e-bikes that are getting into the moped swing of things. The scooter-sharing companies are taking note as well, and have developed their own moped style e-bikes and scooters. Bird’s Cruiser was announced earlier this year, and has just recently started rolling out under the Scoot brand.

As more moped-style e-bikes hit the market in the 2020, this is definitely shaping up to be the hot new trend of the year.