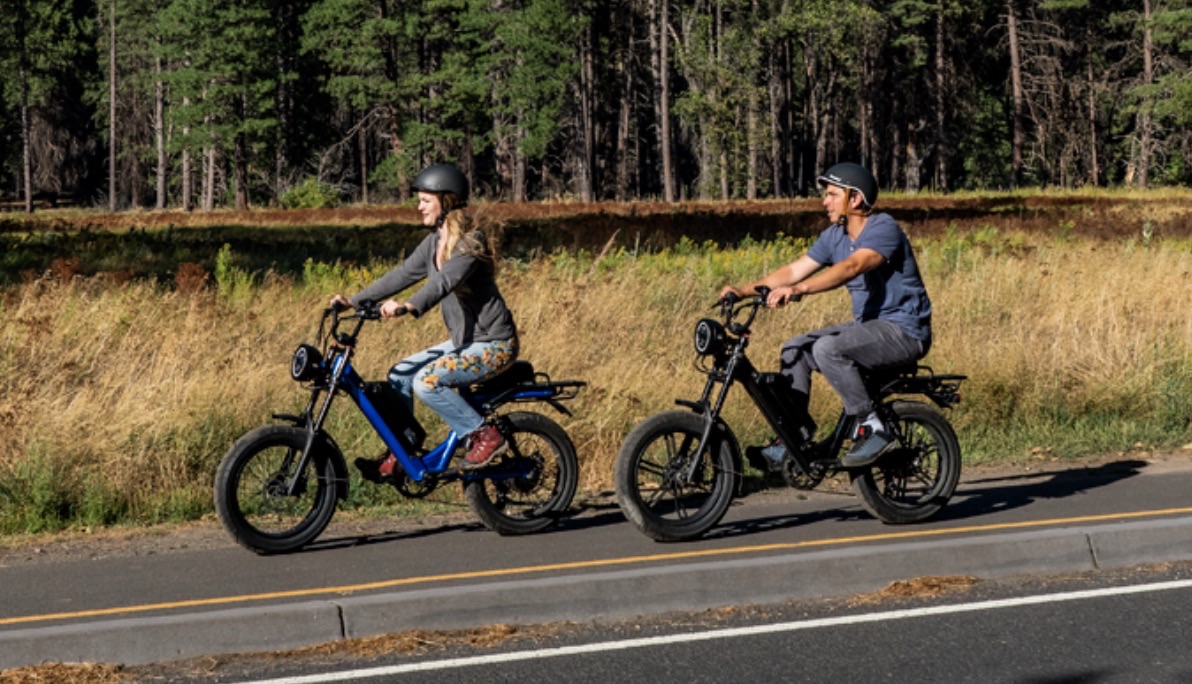 The Juiced Scorpion, one of our favorite, lust-worthy ebikes just went on sale at 9 am eastern time and we thought you should know about it – particularly since I’ve been riding an “almost feature complete” prototype around town for the past week. The Scorpion, which is a full suspension electric moped/ebike hybrid with awesome retro styling and monster 13-19 Ah 52V battery, starts at a nutty $1299+$99 shipping but will go up in price very soon. Juiced are only offering a limited number of each configuration at this price. Frankly, I don’t know how they got the price so low but after putting it through its paces, I can say without reservation, it is the real deal…

First the bad news: The Juiced campaign is on Indiegogo (update: on the Juiced Website) and orders won’t ship until early next year. Tora Harris, Juiced’s founder told me that he expects the first shipments go out at the end of the 1st quarter but real production deliveries won’t ramp up until the beginning of the 2nd quarter. That means you likely won’t have your bike that you order today until spring 2020 – which for a fun bike like this is a bit of a buzzkill. Juiced however is a big ebike company with a lineup of solid ebike offerings so this isn’t a fly by night operation at all.

OK, back to the good stuff. If you absolutely can’t wait for this bike, Juiced currently sells and ships a similar-looking bike called the Camp Scrambler with a similar 52V drivetrain for $1600. This bike is more of a Super 73-style Mini Bike and sits significantly higher. One of my few gripes on the Scorpion is that it is harder to pedal in a low, leaning back position. The Camp Scrambler is built higher for easier pedaling and leg extension.

The Scorpion, at its initial Indiegogo price is a steal however. The 19Ah battery at 52V puts the higher end, more powerful version at about 1kWh of storage. The 13A/52V base model is still a solid 672Wh. Coupled the 52V battery with a 750/1100W motor and you can realistically expect to go around 40-60 miles without pedaling much. If you are like me and want to hit 28 miles per hour and stay close to that as long as possible, your range won’t be as robust. In real world hilly usage, I used under half the battery going 17 miles at full 28mph speed.

Also notable is the full suspension. Both front and rear shocks are heavy-duty and while obviously not the highest-end components, these give the Scorpion an incredible ride. Brooklyn’s CobbleStone streets were no match for the Scorpion’s suspension and taking it on dirt paths is not a problem at all, even with its 3-inch wide street wheels. The Scorpion sits low enough that I can facilitate younger riders too. My 11 year old son had no problem riding the Scorpion around. The biggest problem he had was giving it back to me.

In fact, the low ride height and center of gravity makes this a super easy ebike for novice users. The downside, as I mentioned previously, is that it is a laid back pedalling position and it is hard to get full leg extension for moderate to tall folks.

As we rode around Brooklyn, Juiced’s founder Harris talked about the genesis of the idea. It was all based on a late 70s classic moped-style and that certainly came through in the finished product. We were stopped on the street every few minutes by someone who wanted to know how they could get one of these quiet, street-legal electric mopeds. It was almost comical how much attention the Scorpion garnered. That’s why I think these are going to be a huge success.

And it isn’t just consumers. Bird also got into the game and plans to release these into the streets as the Cruiser (without pedals, chains or gears) for ride-sharing. 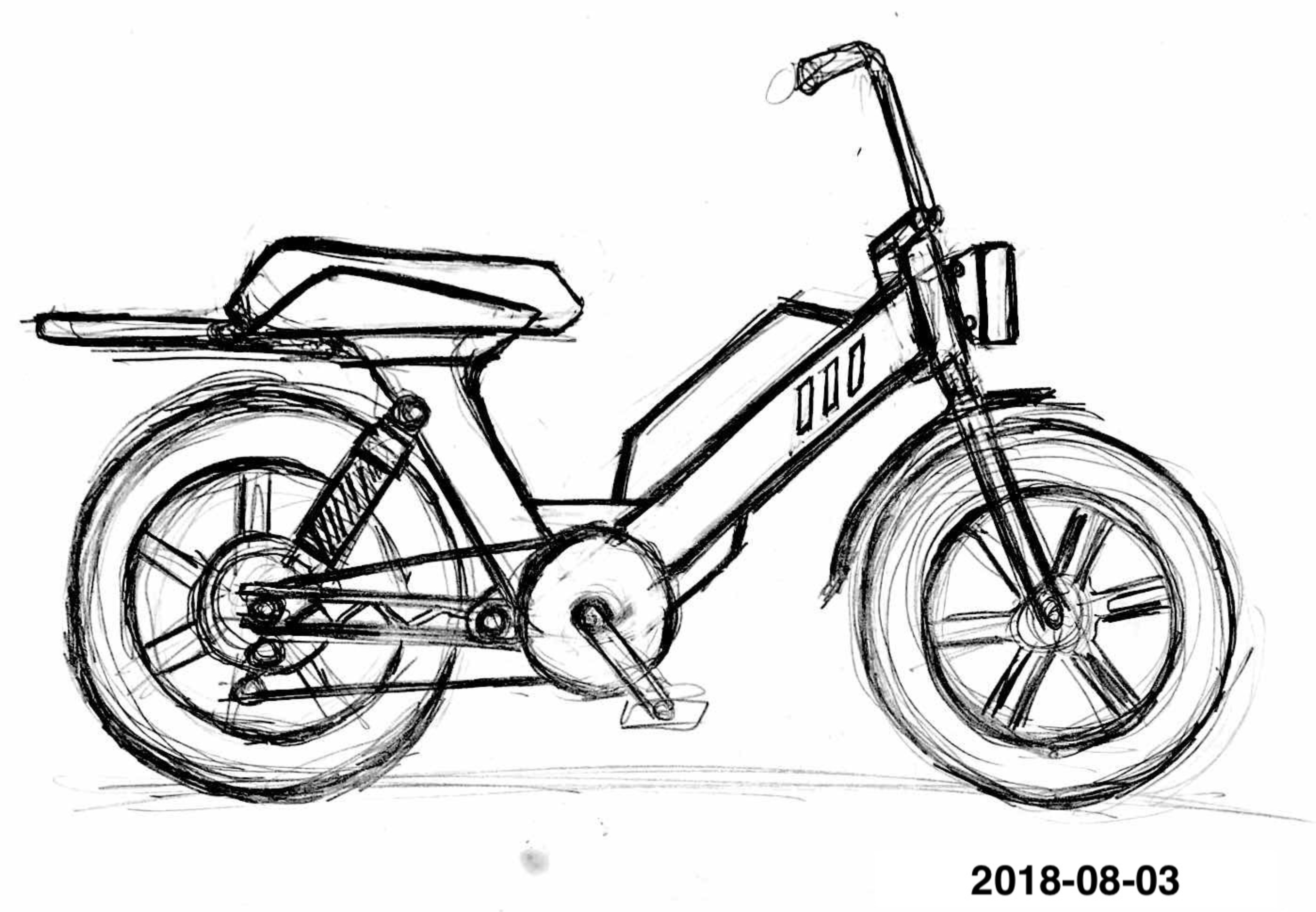 This also reminds me a bit of the much pricier and now discontinued Onyx CTY. I love the departure from the Super 73 knockoffs we’ve been seeing for the past few years.

The motor on this bike is a Bafang 750W nominal 1100W peak rear hub motor. It cranks out the amps from the right hand twist throttle or pedal assist which makes this either a class 2 (20mph throttle)or class 3 (28mph pedal assist) ebike depending on local rules. If you uncork all the power, it will assist over 30mph in “offroad” or as I like to call it, “default” mode. The police in NYC were more interested in where they could get one instead of if they were legal or not. I had no problem taking this home with me on the Metro North commuter train either but your mileage may vary.

The seat on this prototype was a little firm for my tastes. But Juiced says there will be a softer ride in the final product. It was big enough to have my son ride with me. However, I wouldn’t try to get 2 full sized adults on a long ride here. The back rack can also be used for seating, storage or to add panniers.

One of the stand-out features of this moped is the huge, bright LED moto headlamp which lights up the street like car headlights. There is also a rear tail light and options include rear-view mirrors. The 7 speed gears transition nicely between uphill and downhill rides, if you want to use those pedal things. Tektro disc brakes and a left hand side very usable  display round out the feature set.

This is an incredibly fun and useful ebike at an absurd Indigogo price point. For $1299, it is hard to imagine getting a better deal though if you want a smaller frame and fewer features, Rad’s Runner seems like a solid pick at this price point.

If it means anything, after riding this thing for a week, I threw $1299 down and can’t wait to get my final bike this Spring. My only question is should I buy 2?

SAN DIEGO, CALIFORNIA – September 24, 2019 9am EST – Juiced Bikes, a leading pioneer in the e-bike market, is thrilled to announce the addition of the new Scorpion moped-style electric bike to their growing e-bike portfolio. Inspired by the nostalgic, retro design of popular 1970’s mopeds, the Scorpion is a stylish head-turner, packed with premium performance features, including dual suspension, a versatile step-through frame, the industry-leading 52-volt battery, and a standard 750-watt motor for speeds up to 28mph and a riding range of 45-75 miles.

“In the e-bike market, we’re all very focused on pushing the performance envelope. With the Scorpion, however, we wanted to emphasize the importance of the design, while still ensuring the bike was packed with advanced performance features our customers love,” says Tora Harris, CEO and Founder of Juiced Bikes. “Gone are the days of underpowered pedaling. With the Scorpion, we are delivering superhuman power and speed combined with incredible versatility at an extremely affordable price. It’s really the perfect mobility solution for a broad range of riders.”

For the e-bike enthusiast looking for more power, speed, and range, Juiced Bikes will also be releasing the HyperScorpion with an upgraded 52-volt / 19.2ah battery that fuels a riding range up to 75 miles, an enormous 1,000-watt Bafang motor for off-road speeds up to 30 mph, dual pedal assist technology (cadence and torque), rear-view mirrors, and an integrated rear brake light.

The new Scorpion will be available for pre-order beginning September 24th via their crowdfunding campaign on Indiegogo. Extremely limited quantities of the Scorpion and HyperScorpion will be available at just $1,299 and $1,999, respectively. When the Super Early Rider bikes have been claimed, the Scorpion, through the Indiegogo campaign, will be offered at $1,499 and $2,199 for the HyperScorpion.