Is this little four-wheeler an electric car or an e-bike? Apparently it’s both 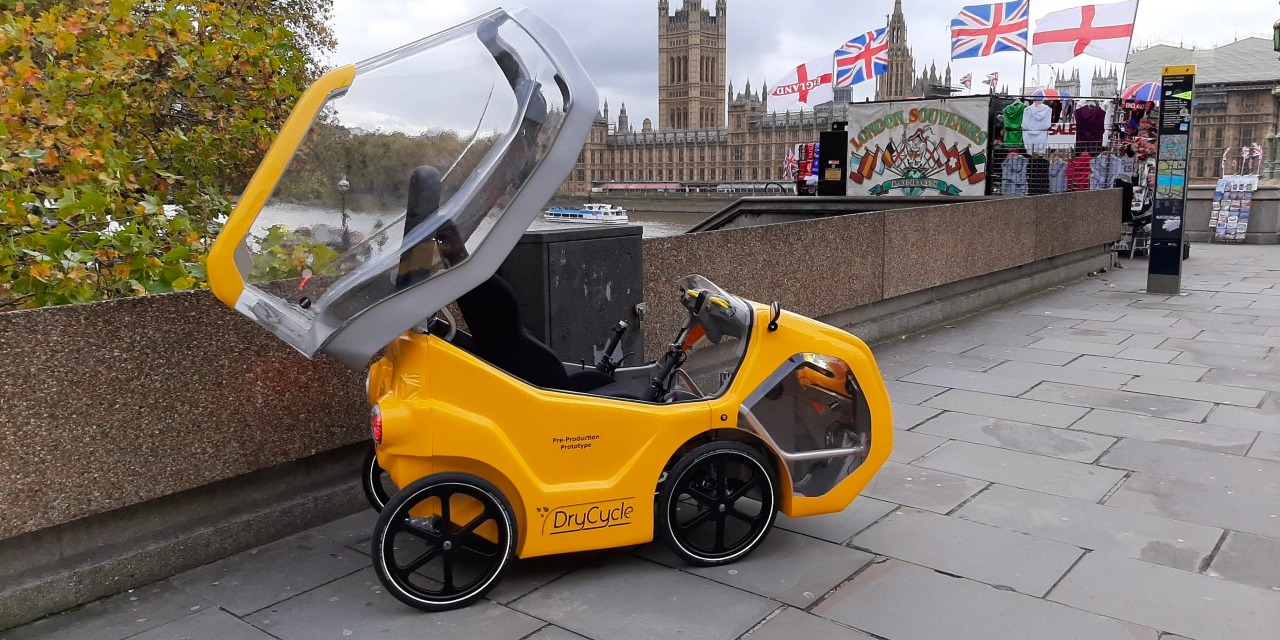 The DryCycle technically isn’t really an electric car, even though it looks pretty car-like from the right angles (and when its bubble top is lowered). It’s more accurate to call it a fully enclosed, electric pedal-assisted quadricycle.

But since I’m an e-bike journalist, this is just about as close as I get to writing about electric cars. Almost.

And you’d be forgiven for thinking this little electric quadricycle was leaning towards the car category.

I mean, just look at the accoutrements it offers.

Not only are riders fully enclosed inside of the polycarbonate bubble and ABS shell, but they sit inside an aluminum frame that has been crashed tested. It is even built with crumple zones to reduce the chance of injury to riders and is confirmed to offer an “extremely low” risk of head injury to the rider, according to New Atlas.

Don’t believe me? What this thing get freakin’ wrecked in the video below!

Other car-like features of the DryCycle include full suspension in the front and rear, a reverse gear, hydraulic disc brakes, key fob remote lock, electronic horn.

There is even an option for climate control and windshield wipers, though those will cost extra.

But alas, this quadricycle is still more of an e-bike, packing a Shimano E8000 motor and wireless Shimano transmission. It only gets up to 25 km/h (15.5 mph) under electric assist as well, making it more of the turtle than the hare compared to neighborhood electric vehicles that can travel almost twice as fast. With 1 kWh of battery capacity, the DryCycle can reach up to 48 km (30 mi) of range.

But before you start pulling out your wallet, prepare yourself for some sticker shock. The DryCycle will come with an MSRP of £14,995 (US $19,000) when it debuts early next year. I’d look up how many used Nissan Leafs electric cars you could buy for that, but I’m sure some angry reader will have that covered for me in the comments section below this article. Suffice it to say, that’s a lot of green for a little green (or yellow) quadricycle.

I like the idea in theory. You could keep riding to work or school on rainy days or throughout the winter and avoid putting more cars on the road.

That makes other e-pedal cars like the ELF and PEBL look downright affordable at less than half the price of a DryCycle.

And despite the creator saying this thing would be street-legal anywhere a bike can ride, I’d like to raise a point of order. I know many states have “bicycle” laws that require two or three wheels, and so a fourth wheel might be a bit of a legal issue. And even if it’s not, I wonder how other cyclists will feel seeing this coming at them head on in a bike lane.

But why wonder when I could just ask? What do you think of the DryCycle? Let us know in the comments below. Or feel free to calculate how many used Nissan Leafs I could get for $20k.