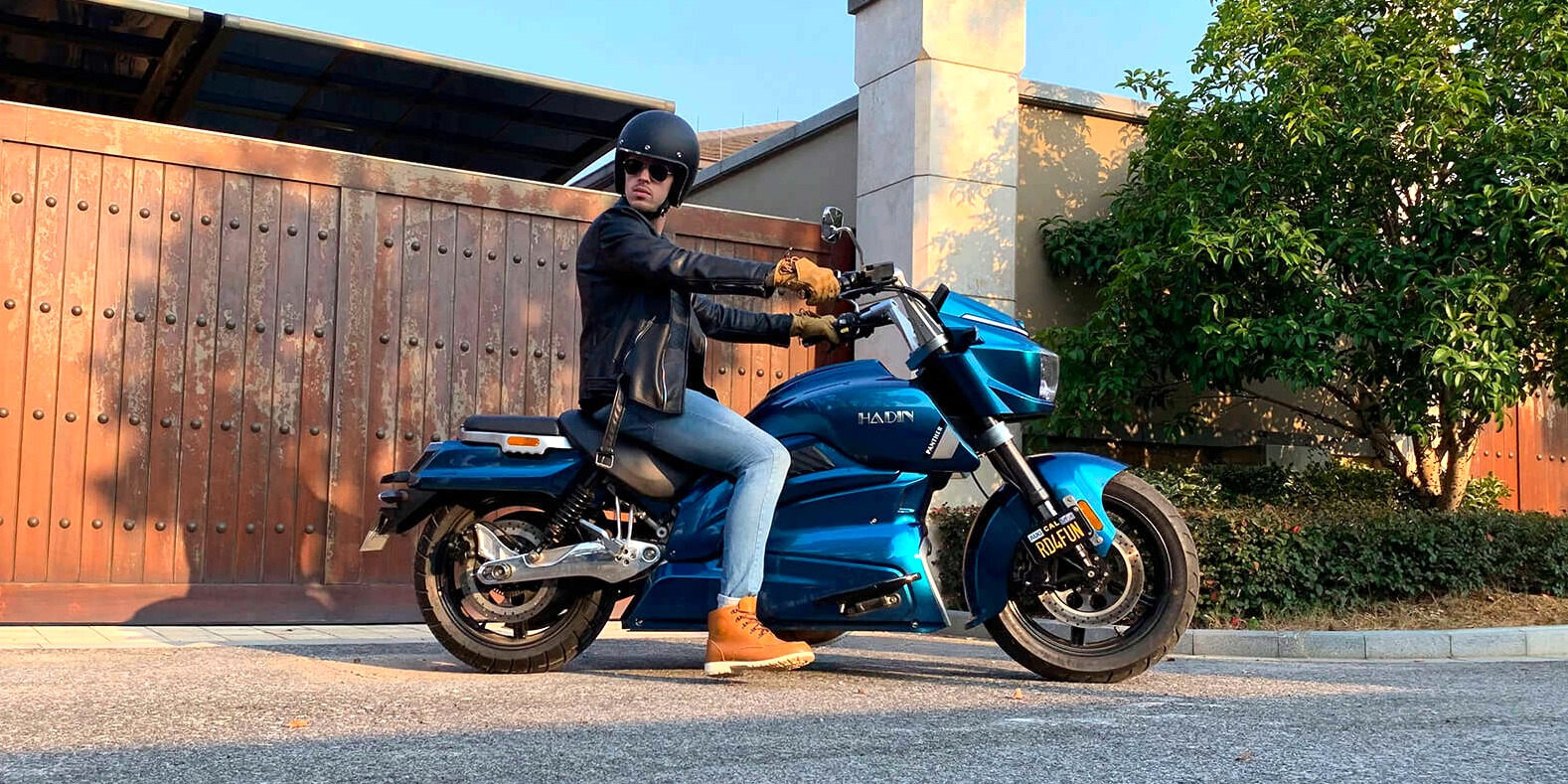 And it certainly adopts the cruiser form factor, complete with scooped seat, sweptback handlebars, and forward-mounted floorboards instead of foot pegs.

In some ways it almost looks more like a Harley than the Harley-Davidson LiveWire electric motorcycle.

It also seems to come with some decent specs, too. It’s not a speed machine, but the top speed of 80 mph (130 km/h) should allow access to any highway, yet also keep the power draw at a reasonable level, helping battery life. There’s no word on the actual battery capacity, but the bike gets a 160 km (100 mi) range rating from the company itself.

The company’s website claims the bike comes with a 45 kW (60 hp) motor and appears to offer belt drive, a common option on already whisper-quiet electric motorcycles.

There are even smart features included, such as keyless operation, smart phone integration, front and rear HD cameras, etc.

According to Hadin, the full debut of the new cruiser will come in about a week and a half at the EICMA Milan Motorcycle Show.

Is the Hadin electric cruiser motorcycle the real deal?

Until this point, everything seems fairly above board. But this is where things start to get weird with the bike and its manufacturer.

Hadin refers to itself as an American company and lists its location as Anaheim, California. However, I’ve never heard a peep about the company before. That’s even weirder when you consider that it’s sort of my job to keep my ear to the ground regarding new electric motorcycles.

When that didn’t work, I figured it was time to dig a bit deeper.

Checking EICMA’s upcoming exhibitor list shows that Hadin is in fact registered and thus expected to be at the show. And it’s going to be a long trip to the show in Milan for Hadin, but I’m pretty sure they’ll be coming from China, not California.

A Whois lookup on Hadin’s website shows that it was registered by a Chinese company known as Suzhou Wonder-Tech Co., Ltd. just over one month ago. Further inspection showed that the meta description of the site (HTML code that isn’t usually visible to site visitors) includes the phrase, “HADIN MOTORCYCLE CO., LIMITED. is a professional leader China, manufacturer with high quality and reasonable price. Welcome to contact us.”

Plus, anyone visiting the company’s site will immediately notice that the English doesn’t appear to be written by a native speaker. Instead, it could generously be described as “stilted.” Have a look:

On the very beginning it was simple, we want it to be a huge FUN machine. We start mind storm, west-coast look for sure, with new mobility, smart phone gadgets. During we building this beloved bike in past 3 years, we discovered a lot more FUN and COOL elements we can put in our design, as we found the potential of new mobility, since no one ever put all new stuff on one bike, we decide to give a shot to see what will come out of it.

Now, I don’t care what language you speak, and the Chinese are doing a pretty decent job of keeping up with Americans in the electric motorcycle industry. Some could argue (myself included) that they are years ahead of any domestic US electric scooter or moped.

And to lend Hadin a bit more credibility, a search of the United States Patent and Trademark Office does show that the Hadin trademark was filed for in 2016 by an LLC known as Hadin Motorcycle Co, LTD. So it appears that Hadin has existed in some form or another since at least 2016, despite the company only having a website for one month.

But it’s a bit odd to be pitching this as a California company when it clearly appears to be a Chinese export with — at best — a locally registered business entity.

All of this simply means I’m even more fascinated to see what actually shows up at the Hadin booth at EICMA and learn more about this mysterious new electric cruiser. I’ll be on the show floor when the doors open, so you can be sure that Electrek will have all the latest news from EICMA on this year’s new crop of electric motorcycle announcements and debuts.

But until then, let’s hear what you think of the Hadin electric cruiser bike in the comments below!