Tacita’s T-Cruise Urban electric motorcycle is one of the few electric cruiser motorcycles on the horizon right now. And the company has just released its 2020 update to the T-Cruise Urban, as well as its pricing structure.

But the company expanded its lineup when it revealed the new T-Cruise Urban electric motorcycle. The bike maintains an old-school cruiser geometry with a modern twist — a completely electric drivetrain. But in keeping with that old school theme, the T-Cruise Urban also has another throwback: a manual gearbox.

Now Tacita is showing off the 2020 T-Cruise Urban ahead of beginning sales in the US and Europe. 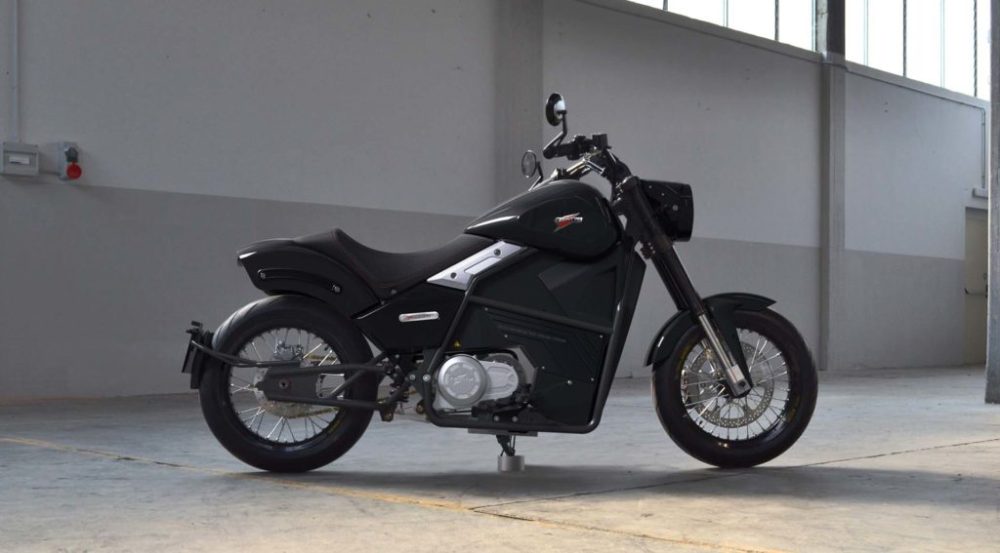 Tacita originally showed off the first T-Cruise prototype around two years ago at the 2017 AIMExpo. Ever since, the company has been working on making improvements to the design to prepare it for mass production.

With the Tacita T-Cruise Urban we have combined the best of two worlds. The American motorcycle heritage: made of timeless style, good torque at low rev, low seat, and feet-forward riding position in a distinguished machine with the Italian motorcycle culture; with sporty gearing and wheels, stiff tubular frame, contemporary suspensions, and brakes, with the plus of our second-generation full electric powertrain.

This is the first production Tacita T-Cruise, which is inspired by the prototype we presented at AIMExpo in 2017 that includes all the customers’ suggestions we received during and after the show.

The 2020 T-Cruise Urban will be offered with four different power options using Tacita’s 2nd generation liquid cooled powertrain: 11 kW (hp), 27 kW (hp), 34 kW (hp) and 44 kW (hp). There are also two different battery sizes: 9 kWh and 18 kWh. Each battery is available with each motor combination, except for the most powerful 44 kW model, which can only be purchased with the 18 kWh model. With higher power motors, a larger capacity battery is generally required to distribute the power draw across more battery cells.

See the entire pricing chart below. 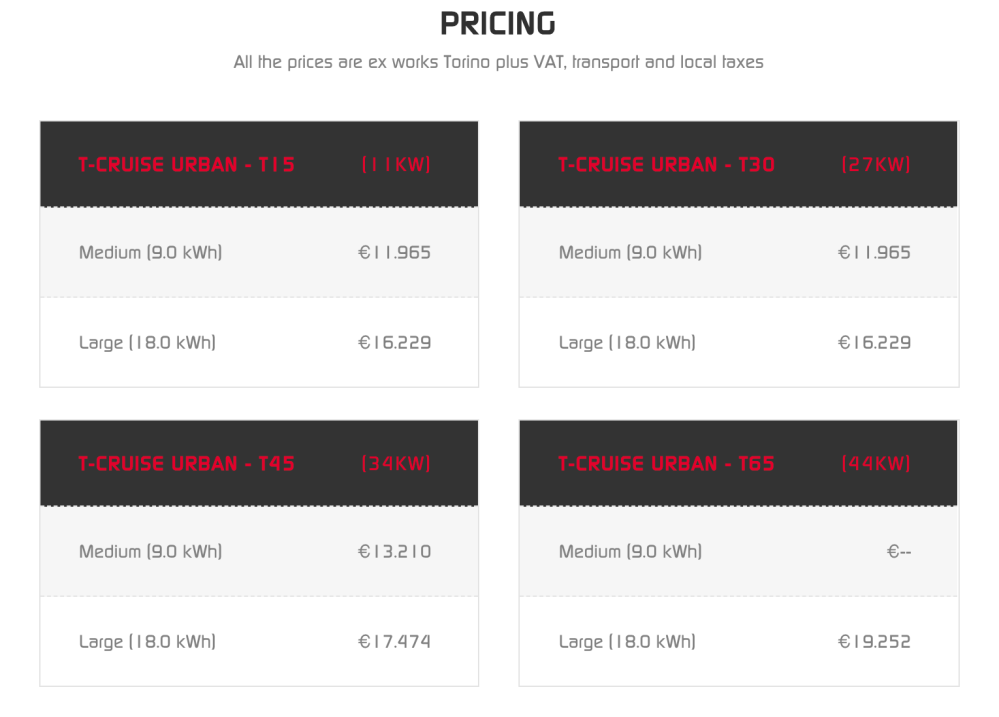 Tacita has not yet released any info on the bike’s top speed, but indicated that their range testing included speeds up to 90 km/h (56 mph). So for now, all we know is that it can go at least that fast.

The original prototype, unveiled back in 2017, had a purported top speed of 170 km/h (106 mph), which would nearly exactly match the top speed of Harley-Davidson’s new electric motorcycle, LiveWire.

However, the original prototype was also sporting a 27 kWh battery, and that spec apparently didn’t make it past the chopping block. So the top speed of the T-Cruise is really anyone’s guess at this point. 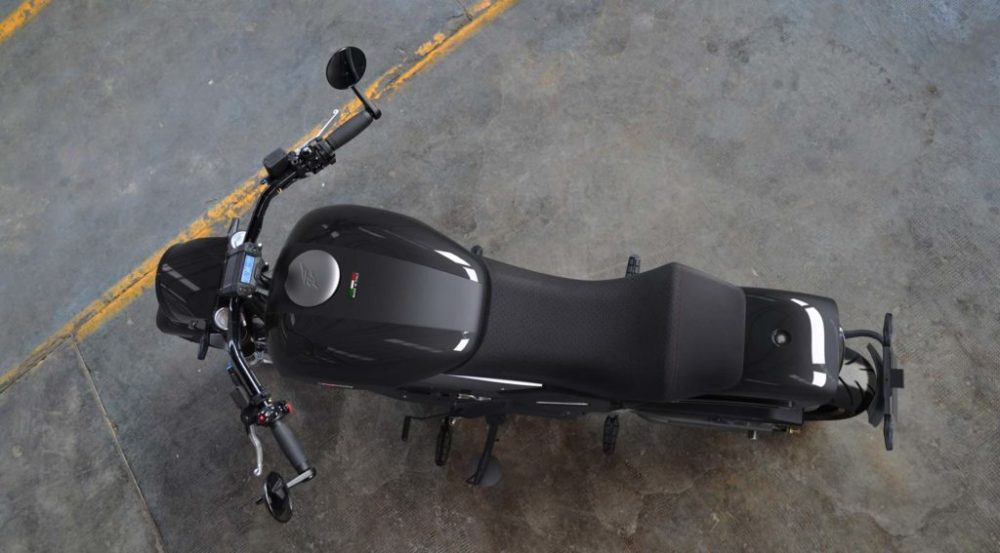 The cruiser design isn’t the only thing that separates the T-Cruise Urban from the rest of the electric motorcycle industry. The manual gearbox also makes it a rare breed. Tacita says the gearbox can be offered in 2-5 speeds, but that a single speed option is also available, which could be a welcome relief for the many new e-moto riders that never learned how to shift.

And while you may be asking, “Why does it have gears?” the company is ready with a response:

Why the speed gears? In order to have the best gear ratio for every situation, reducing the overheating of the engine and the consumption of electricity. In fact, the lower ratios allow the torque to increase, so that the inrush current decreases. Meanwhile, thanks to the longer gears, you will be able to make the most of the engine maximum peak, removing every compromise and maintaining the maximum efficiency.

Considering how few cruisers there are in the electric motorcycle market right now, I’d say this will be welcome news. Even more so for Americans, which have both a stronger affinity for cruisers and a distinctly smaller pool of options for electric motorcycles available in the US.

While the price seems a bit high for the specs right now, I wouldn’t call it exorbitant. Especially not when you consider what other premium electric motorcycles are out there with jaw-dropping price tags.

When it comes to the gearbox, I’m still on the fence. I’ll admit that while most of my saddle time is spent on e-motos, I’ve ridden a few gas motorcycles and actually do enjoy running through the gears.

Until I get to the city, that is. And that’s when I’m thankful for the single-speed, clutchless design of nearly every e-moto out there.

But Tacita’s gearbox might be a nice compromise. Because the engine idles at 0 RPM, rider’s don’t need to pull the clutch in when coming to a rest or shifting into 1st from a stop — it’s only necessary when switching between gears. That means city traffic can likely be a clutchless affair, with clutching and shifting saved for higher speed riding — the time where it’s actually fun.

When making the conscious decision to transition to EVs, I figured my days of shifting gears were over. Which to be honest, was kind of a bummer. My dad taught me to drive on his manual transmission 1964 Corvair Spyder, an experience I’ll never forget. There’s just something satisfying of feeling yourself mesh with a machine when you’re in complete control of the powertrain. So I’d absolutely be interested in trying out the Tacita T-Cruise Urban to see if it can give the fun sensation of winding through the gears while removing the annoyance of city shifting.

If I can get that test ride, you all will be the first to know.