I’ve been a fan of personal electric vehicles (PEVs) for at least a decade. Whether that means electric bicycles, e-scooters, e-skateboards, e-unicycles, e-motorcycles or any other number of weird little electric vehicles, I’ve ridden just about all of them over countless thousands of miles.

And while the majority of my saddle time has been on electric bicycles, spending the last five months on a GenZe 2.0 electric scooter has changed me. Five hundred miles later, I’m an electric scooter convert that has finally kicked cars goodbye. Here’s my story.

It was fairly unassuming as it backed down the ramp and into my life. A simple scooter, white with a black cargo box. A 7-inch color touch screen adorned the handlebars. Two bug-eyed mirrors gave it a bit of personality. Certainly no babe magnet, but it would do.

But as it turned out, I was blown away. Big time.

With a 30 mph (48 km/h) top speed, I could keep up with city traffic better compared to an e-bike. The GenZe got me off the shoulder and into the lane. And because the scooter has a much larger physical presence, cars suddenly gave me space. In fact, they didn’t just give me space – they gave me a spot! Suddenly I was one of them, a true motor vehicle. I owned the lane, and they let me.

I proudly cruised along with the flow of traffic, taking up my rightful place. And in the Cambridge/Boston area where I ride, traffic rarely surpassed my 30 mph limit anyways, so I was usually golden. In the rare case where I found myself on a faster road with someone behind me, I’d just scooch over and let them by. 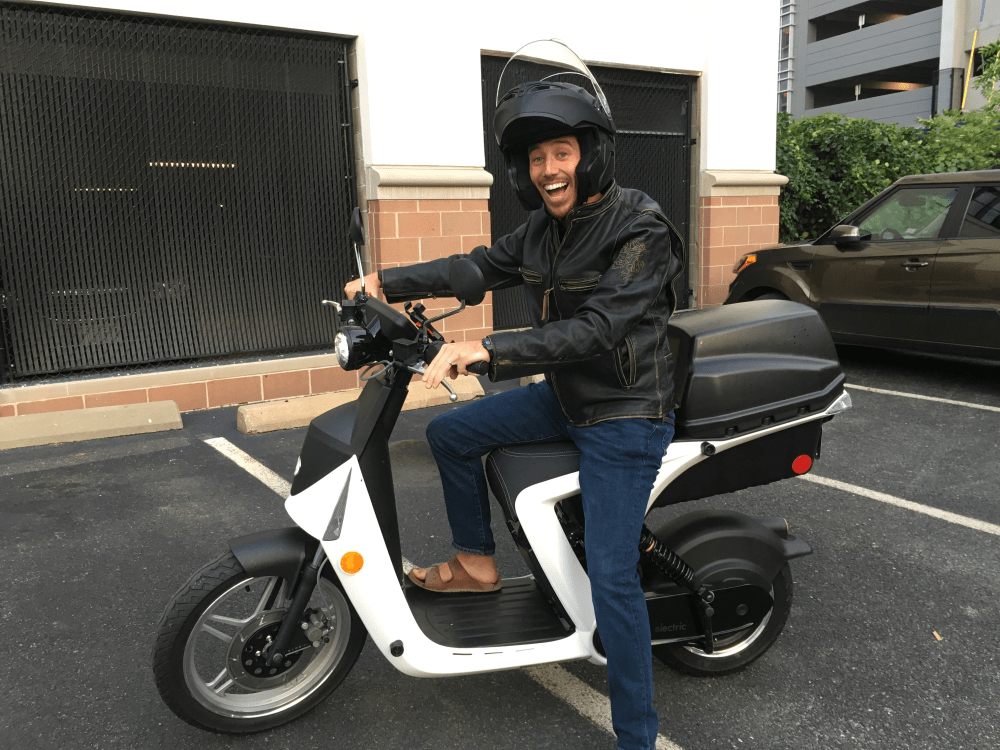 Perhaps not the best choice of footwear (I didn’t ride like this, FYI)

With its built-in GPS, I also didn’t have to worry about my scooter getting stolen. Plus it’s a lot harder to carry off a 232 lb (105 kg) electric scooter than a 55 lb (25 kg) electric bicycle.

The electric scooter turned my commute from a semi-stressful slog to a fun thrill ride. Suddenly trips were no longer chores, they were opportunities to cruise around! And with my newfound respect on the road, the experience was finally a pleasure instead of a battle.

Check out my original video review below:

Utility of an electric scooter

So I was king of the road – great. But that only matters if the vehicle is actually useful.

In this case, “useful” is an understatement.

With 30 miles (51 km) of range, I can go anywhere in the city and back without a charge. In fact, I usually only charge once or twice a week. It’s just a city, how far can you really go?

And charging is simple enough too. I live in an apartment so I remove the battery and charge it upstairs. If I had my own garage then I could charge even easier with the battery left on the scooter. Plus the battery has a built-in charger, so I don’t have to remember to carry one with me. All I need is a $7 C13 cable (the AC power cord usually used for computers). And if I’m ever worried about having enough range to get home, I can charge while I’m out. Most restaurants, offices, campuses and other buildings won’t notice or mind if you plug in your phone or laptop to charge. Pushing that kindness/ambivalence a bit further, I found the same was true for charging a battery the size of a briefcase. 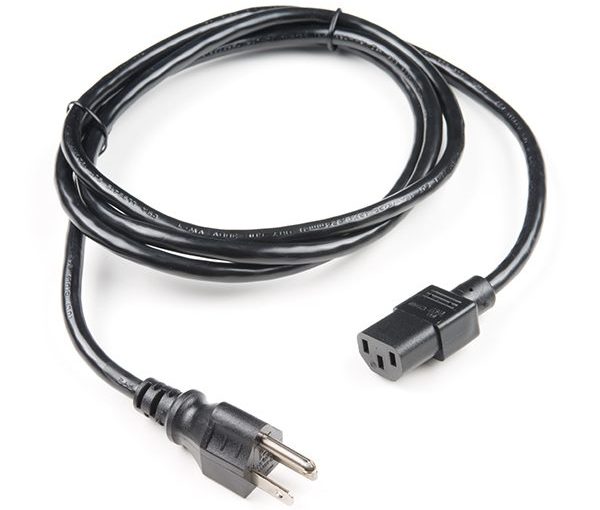 This is all I need to charge

The GenZe 2.0f also has a large rear cargo box. That space on the 2.0s version is open like a pickup truck, but I prefer the locking cargo box cover of the 2.0f model.

I used that thing for everything. I could easily fit three bags of groceries in there, which lasts my wife and I for nearly a week.

I picked up pizza with the scooter (hint for anyone else trying this: strapping the pizza to the top of the cargo box was the best method). 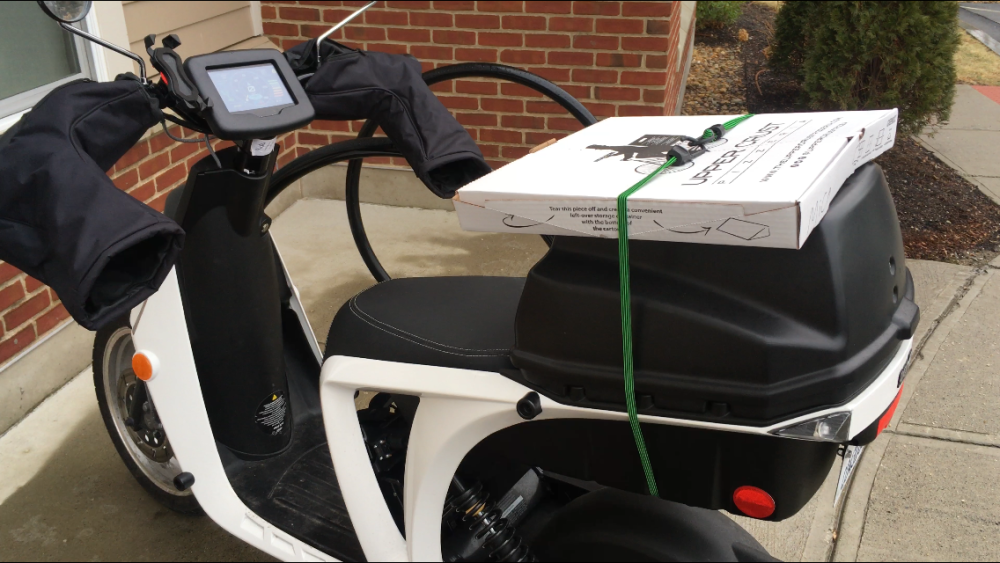 I hit up my local Home Depot and carried home planters and sacks of planting soil.

I even dropped my wife off on campus when she was running late for class and didn’t have time for the train. (Note: you’re not supposed to ride with two people on this one seat scooter, but it’s definitely possible if you’re both small. It’s got the power. But still, don’t do it. Wink.)

When I used to live in Tel Aviv I saw people carry their dogs on their scooters all the time. The little doggos just stood on the floorboard as their ears flapped in the wind on one side and their tails on the other. Of course my dog took one look at my ride and said “don’t even think about it”, so she still gets walked to the vet. Unfortunately.

But for nearly everything else, the sky was the limit. If things were occasionally odd-shaped or too long, I just let them hang out and closed the lid most the way. Classy, I know. 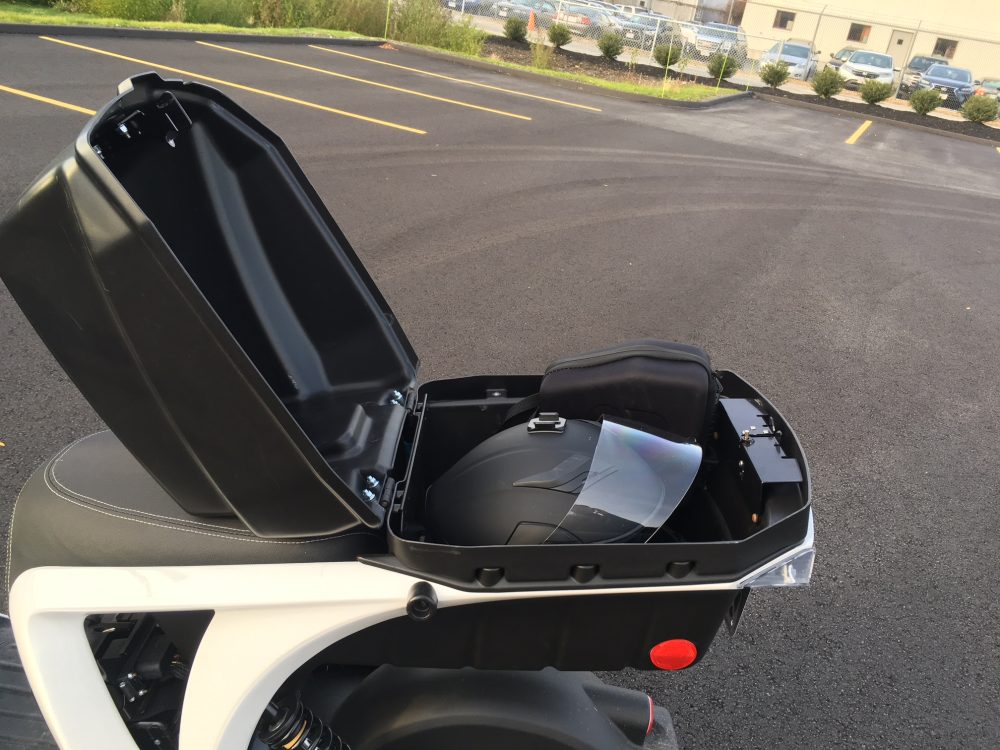 Plenty of room left even with a full face helmet, drone and jacket

Not only is the GenZe a capable hauler, but it’s quick too! Whenever I met friends I was always the first to arrive. When we’d leave together, they never once beat me. Whether they took an Uber, their own car or public transportation – there’s just no match for an electric scooter in the city.

Here it is legally classified as a moped and is even allowed to use on-street bicycle lanes. I try to avoid that when possible because the cyclists don’t seem to take “I understand your frustration but this is completely legal in the Commonwealth of Massachusetts” very well. But it sure comes in handy when traffic is backed up. I can scoot over into the bike lane, pass everyone, then hop back in at the front of the line, zooming off before any drivers can swear at me over their own frustrations. Hey, you chose to sit in a slow-moving steel box stuck behind a hundred other steel boxes. Not my problem.

Electric scooter as a car replacement

And it’s at those times that I appreciate how freeing it is to be on an electric scooter. In fact, I’ve realized that I have only used a car once in the past five months – and that was for a 2-day 1,200 mile (2,000 km) road trip that was admittedly a bit outside the capabilities of the GenZe electric scooter.

But other than that, I’ve managed to completely replace a car. That’s not only immensely freeing, it’s also significant for urban pollution. My GenZe app informs me that I’ve saved 321 lbs (146 kg) of CO2 with my trips over the past five months. That’s pretty decent for one person. Not to mention the reduced smog and urban grime. My biggest concern when making the switch to an electric scooter last fall was probably fearing what would happen in winter. As it turned out, not much changed.

As it got colder, I simply bundled up. A leather jacket and jeans keeps me warm down to about 32ºF (0ºC). Below that, I found that long johns (thermal underwear) and a tube scarf make a big difference.

The worst part of the cold was probably my hands. I tried getting by with cheap winter gloves but they didn’t cut it below freezing temperatures. I finally shelled out for $65 winter motorcycle gloves and it made a world of difference. Between those and some cheap bar mitts (see pizza photo above), I’m perfectly warm while riding around in below freezing weather. 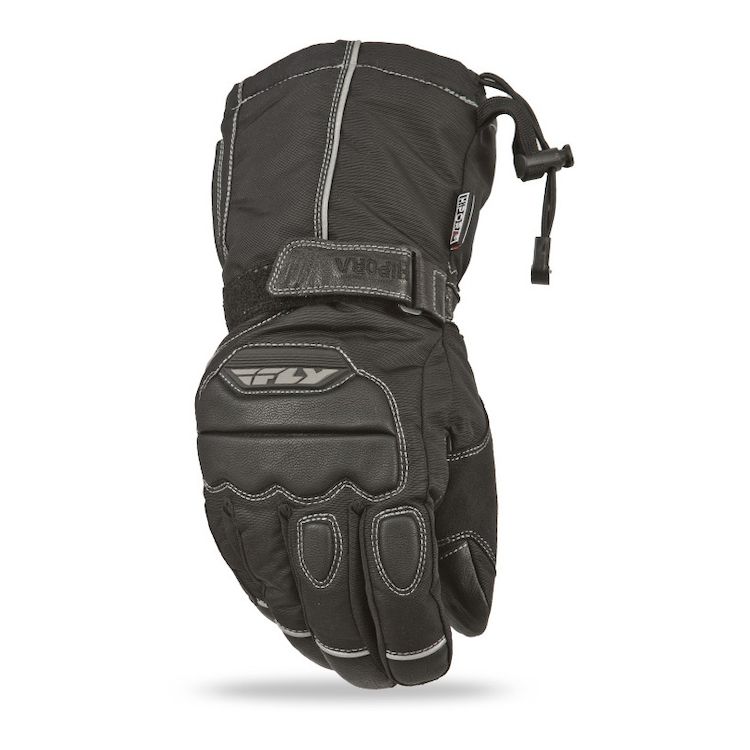 Of course when temperatures get down near freezing, your riding style has to change. Ice is obviously a much bigger deal when you only have two wheels, as cars rarely fall over. Of course I always watch the road, but when temperatures drop I’m much more cognizant of the surface conditions. I also leave more following distance and enter turns more slowly to reduce my lean angle.

Is winter riding as much fun? No, it’s not. But it’s certainly doable with the right gear and mindset.

The GenZe 2.0f scooter has totally turned me into a scooter guy. But I’m also fortunate that my lifestyle makes that possible.

I live in a big city. I don’t have kids that need to be carpooled around. And I have a wife that doesn’t think I’m ridiculous when I pick her up on a scooter. 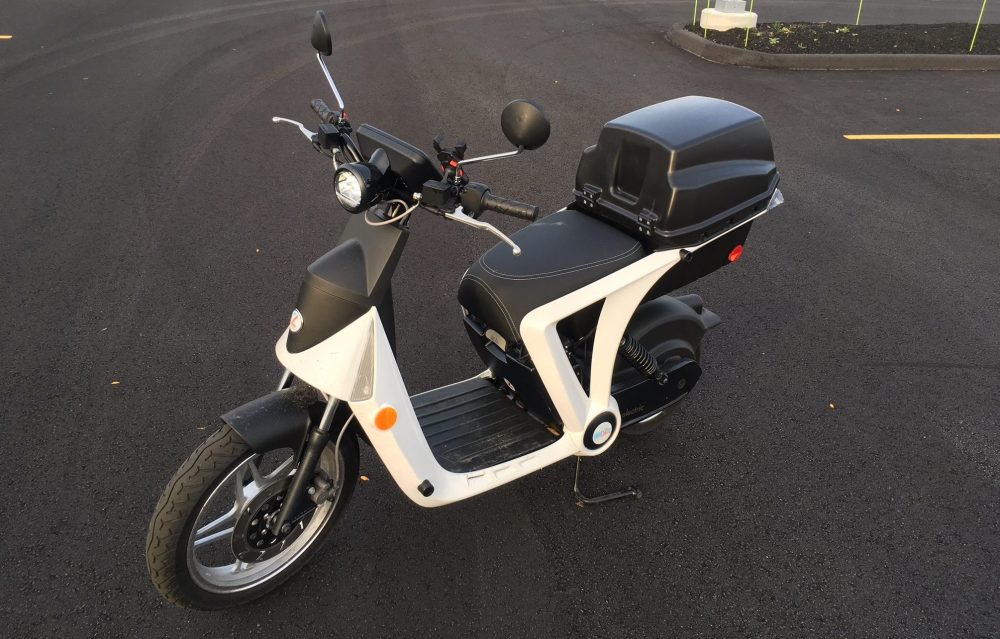 I understand that not everyone has the same situation as me. But let’s be real: over 50% of the US population lives in cities. I’ll wager that for most of them, an electric scooter could be a great option for many trips. It might not completely replace a car for some families that require the extra range, cargo space or weather-ability of an enclosed vehicle. But even for those folks, an electric scooter is likely a great option as a second vehicle. There are many one-car families struggling with the decision of whether to add a second car. I propose that an electric scooter could be a much more affordable and efficient option than a second car.

So while it might not work for everyone, I think that an electric scooter is a much more capable vehicle than it often gets credit for. And I think that more electric scooters on the road would be better for everyone. Drivers would have less traffic, riders would have quicker and more fun commutes, and the whole world would breathe a little easier.