Tern’s GSD electric cargo redefined what it means to be a convenient cargo e-bike. And now the company has unveiled a new model known as the Tern HSD. The GSD’s new little brother has almost as much cargo capacity but manages to stuff it into a smaller and more manageable frame.

Electric cargo bikes are known for their excellent utility as the SUVs of the e-bike world. What they are definitely not known for is their small, convenient size.

But the new Tern HSD seeks to change that with a radical new electric cargo bike that is as capable as it is manageable.

The HSD is only 170 cm (66.9 in) in length, making it nearly a foot shorter than the RadWagon, another popular electric cargo bike (and one that we’ll be featuring with an in-depth review here on Electrek shortly). That small frame makes the Tern HSD handle more like an ordinary e-bike, offering nimbleness rarely seen in a cargo e-bike. And just like the GSD, the HSD flips up to allow you to park it on its tail, meaning it can fit in the corner of room or garage and take up barely more space than a potted plant.

“Many ebikes on the market look like standard bikes with motor systems and batteries wedged in. We started the HSD project with the goal of designing a better, more useful, ebike. That meant wiping away pre-conceived notions for things like frame design, riding geometry, and wheel size. The result is the HSD, a small bike that is just much more useful.”

The HSD can easily carry a child in the back. And an upcoming passenger kit is designed to continue carrying kids as they grow older. The Atlas H rack on the rear is rear is rated for 60 kg (132 lb) while the entire bike is rated for 170 kg (375 lb). I spoke with Josh at Interbike last year, where he gave me a ride on the back of a GSD and told me about Tern’s cargo capacity testing procedures. Suffice it to say that if Tern says this bike can carry 170 kg, then at some point they were riding it around with significantly more weight than that on it.

And the HSD is also designed to fit as many riders as possible. According to the company:

“The HSD resizes in seconds to fit riders from 150 to 195 cm (4’11” – 6’5″) so everybody in the family—from teens to grandparents—can enjoy the ride. The new Easy-Step frame design offers a comfortable upright riding position for riders tall or small, as well as easy mounts and dismounts. Paired with an adjustable stem and seatpost, a suspension fork, and balloon tires, the HSD delivers a smoother and more comfortable ride even on the meanest cobblestone roads.”

The Tern HSD offers convenience… at a price

The Tern HSD will be available at three price points. The HSD P9 will start at $3,099, the HSD S8i will start at $3,699, and the top of the line HSD S+ will start at $4,999, though pricing may vary by region. All three come with high end components, but the higher tier models ratchet up the specs, increasing from Bosch Active Line motors to Bosch Performance Line and upgrading the Bosch Purion Display to a Bosch Intuvia.

The S8i and S+ also come with Gates Carbon Belt Drive systems for nearly zero noise and zero maintenance operation, and the S+ also features an Enviolo automatic shifting transmission. The S8i still comes with a nice Nexus 8 speed internally geared hub, while the entry level HSD P9 features a Shimano Alivio Shadow shifter. Still nice, but not quite as nice as a Gates belt drive and Enviolo automatic transmission.

All three are rated for a load capacity of 170 kg (375 lb). That’s just shy of the Tern GSD’s cargo capacity, though in a smaller package.

In my mind, Tern is one of the best e-bike designers out there. They’ve built some really impressive bikes and they never cut corners when it comes to designing for quality and longevity.

The downside is that means the price is going to make you gulp.

When there are cargo bikes out there for half the price, it’s hard to convince someone to fork over more for a bike like this. But I think Tern did a good job of outfitting the HSD with enough quality components and with the right design to at least take a stab at drawing riders away from the more budget-priced offerings.

If you use an e-cargo bike as your daily carpool vehicle to drop your kids off at school or as your main grocery hauler, then the hydraulic disc brakes, suspension, transmission, and battery/motor advantages of the Tern HSD start to look pretty darn appealing. Plus there are tons of accessories that mount onto hardpoints designed into the frame and add extra utility for hauling different kinds of human or inanimate cargo. 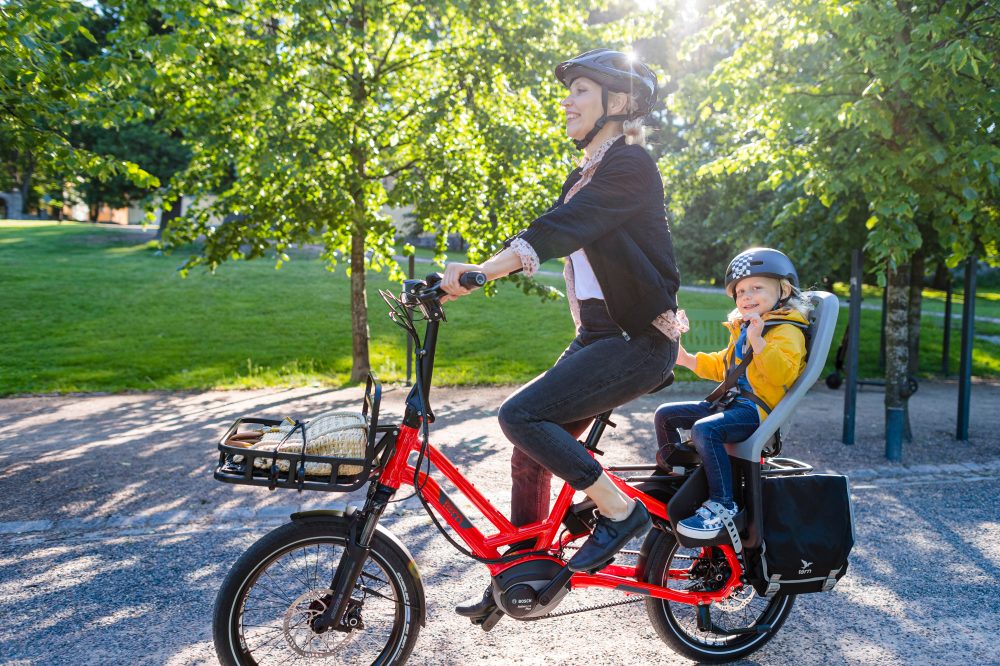 As much as I’ve enjoyed riding the $1,500 RadWagon (which I’ll be writing about soon), that thing is a boat. Moving it around the bike room of my building is a frustrating exercise. And so if the Tern HSD can handle like a standard bike but give me the advantages of a cargo bike, then I’ll definitely give it my consideration.

I’m not quite sure if the higher end models are worth the higher end price, even though there are some admittedly nice components on those versions. But I can certainly see committed cargo e-bikers jumping on them. With the Tern name, an expensive e-bike isn’t quite as risky of a bet.

But can it draw me away from crazy affordable yet admittedly lower quality offerings like a RadWagon? We’ll have to see about that one.

What do you think of the Tern HSD? Let us know in the comments below!