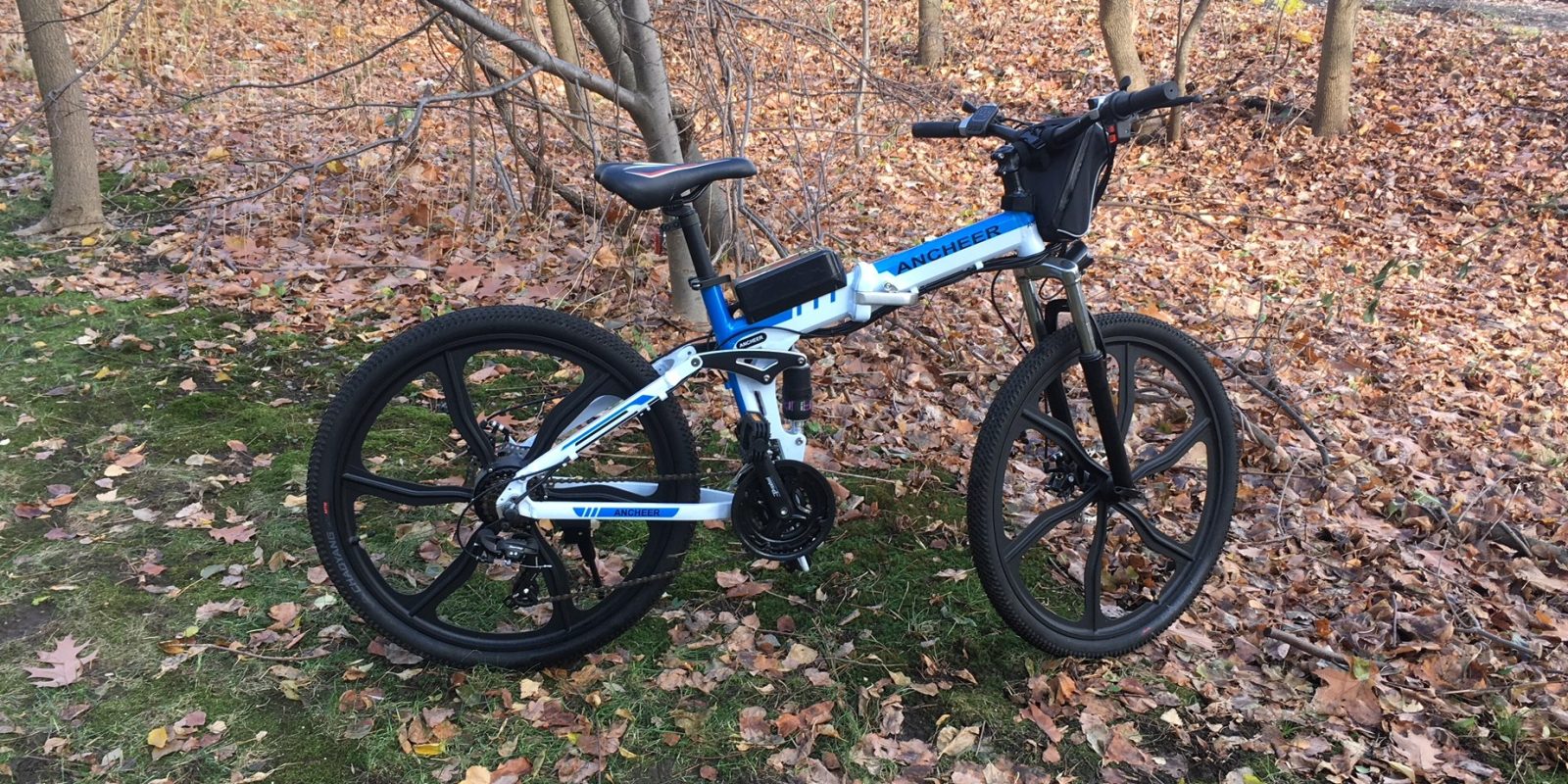 The latest budget electric bicycle I’ve been riding is the $660 Ancheer folding electric mountain bike. And believe it or not, this bike really surprised me.

Some people knock cheap electric bicycles for being more or less disposable. Others deride them as “bicycle shaped objects”.

But I think budget e-bikes have their place. Sure, these e-bikes aren’t going to hold up to years and years of abuse. But when used within their abilities (i.e. normal riding conditions), budget e-bikes have an important role. They allow first time e-bike riders to dip their feet into the pool, so to speak, without breaking the bank.

It is comprised of exactly one cheap folding bicycle frame, one simple suspension spring, one simple springer fork, one motor, one battery and the bare minimum of other parts required to classify this thing as a bicycle, technically speaking. 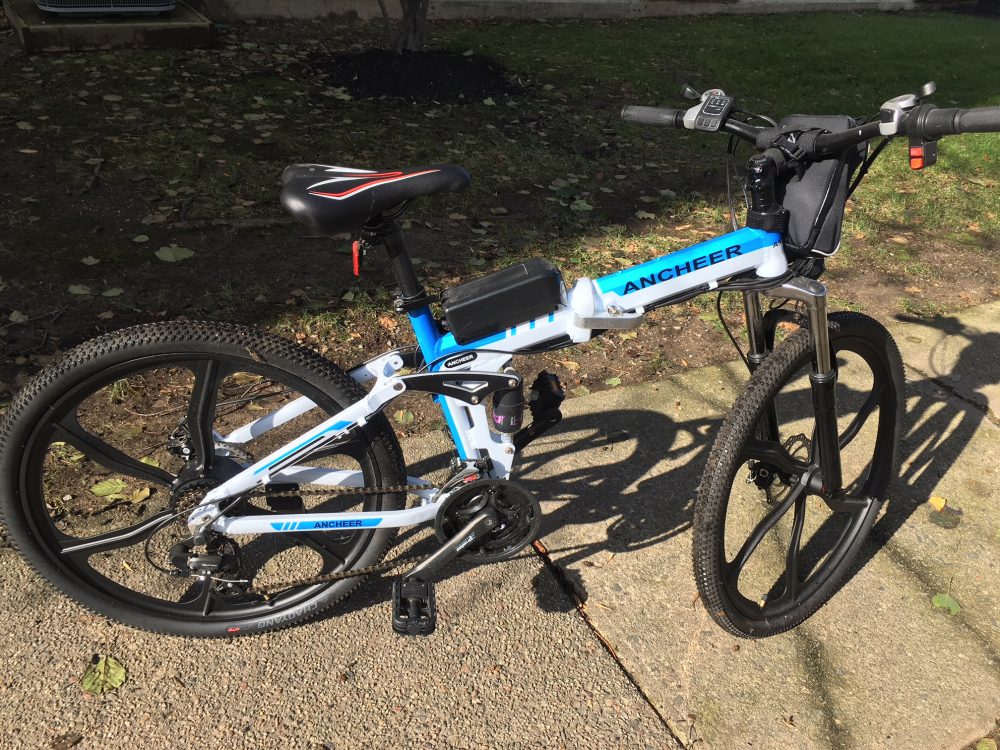 This isn’t a super powerful e-bike, and it doesn’t have any fancy features, but it works. And it works well.

When you twist the throttle, you take off. It’s not insanely powerful, but it will still bring a smile to your face.

The brakes certainly aren’t as nice as hydraulic brakes, and require more effort to engage than hydraulics, but they work just fine.

The pedal assist is also nice for when you want to get a workout. With 15 miles of range on throttle-only operation, switching to pedal assist can help eek out more range.

The suspension works, but there isn’t any true dampening. That means you’re just riding around on springs. On a real full suspension e-bike (i.e. a few thousand dollars) you get actual oil-dampened shocks. Those absorb bumps and dampen the shock. With springs, the bike bounces a few times after bumps, with the energy dissipating through the spring stretching and compressing.

That’s not as comfortable as true dampening suspension, but nicer than no suspension at all. For city riding, where you’re hopping curbs and hitting pot holes, this is about all you need.

You might have noticed that the wheels look a bit odd. They aren’t spoked, like most bikes. Instead, they are molded rims. That doesn’t leave a lot of room for repair if you even bang it hard, but it removes the maintenance and failure issues related to spoke tension.

I spent a few years working in an e-bike shop doing repairs, and one of the most common failures we saw on cheap e-bikes was spokes loosening or breaking over time from the motor power. By removing the spokes entirely, Ancheer removed the associated problems.

Is it a true mountain bike?

No, no it’s not. The Ancheer folding electric mountain bike is an urban mountain bike. What that means is this will be a more comfortable bike for smoothing out road shock, but it’s not really optimized for actual trail riding.

Of course that didn’t stop me from trying it out on trails. And the Ancheer folding electric mountain bike will work off-road. I climbed trails, bounced off roots and stumps, and basically gave it a decent mountain-biking experience. The bike handled it, but it was not what I would call a comfortable ride.

I’ve ridden $7,000 electric mountain bikes and the difference is night and day.

But that doesn’t mean it doesn’t have a place in the electric bicycle ecosystem. I did 90% of my testing for the Ancheer folding electric mountain bike on-road in bike lanes and on surface streets. That’s where this bike truly excelled.

If you’re looking for an inexpensive grocery getter or a recreational e-bike for tootin’ around town, this would be a prime candidate. The suspension is enough to make the ride a bit more comfortable, and you can’t beat the price.

Plus, the folding aspect makes it great for fitting into a normal sized car. It should be easy to bring to your local trail or park if you don’t live nearby. Or if your train or subway only allows folding bicycles on board, then you’d be all set without having to downgrade to a folding e-bike with small wheels.

This is a cheap e-bike. Its components aren’t high end and nothing about it is fancy. But I put around 100 miles on it and the bike is holding up just fine, even with 10 miles or so of off-road testing.

I wouldn’t expect this bike to last for years of daily use, but as a weekend warrior, it should be fine.

The Ancheer folding electric mountain bike does have a few weird quirks. The first is the handlebar mounted battery. It saves space for the folding mechanism, but looks odd. Fortunately it has very little effect on handling because it is mounted so close the head tube’s pivot point. It does raise the center of gravity of the bike a bit, but the difference is small compared to how much you raise the bike’s center of gravity.

The second is the seat. Oh man, you’ll want to replace the seat with an alternative quickly. Even a cheap $18 seat will be better. Or get a $10 slip-on gel cover. Just do something, because the stock seat is a rock. I wanted to leave it on the whole time for the sake of a fair review, but boy is my keister singing.

So all in all, I’d rate this bike a solid 7/10. It’s not great, but it’s definitely good. And for anyone who is fine with good, you’ll be happy with the Ancheer folding electric mountain bike.

[Update: looks like Ancheer has temporarily sold out of the bike, but their $615 electric bicycle (non-folding) that we also reviewed is still available!)