Rumors about Evoke’s new electric cruiser project have been swirling for the better part of a year. Now Electrek has received an exclusive first look at the new concept’s design.

Evoke Motorcycles is based in Beijing and is best known for their first model of electric motorcycle, the Urban Series.

The Evoke Urban Series is more a naked commuter electric motorcycle more similar to the Zero Motorcycles line of bikes.

Evoke’s new cruiser, which has a much more laid back riding posture, uses a brand new drivetrain developed by the company. It also marks a significant increase in speed and power over Evoke’s first model.

Evoke’s newest electric motorcycle will be known as the Evoke 6061. Its name is derived from the “Twin Plate Frame”, which uses a precision laser cutting process that slices out the bike’s frame and battery box from solid T6-6061 aluminum billet pieces. All of the powertrain components, battery modules, and tubular subsections are then directly mounted to the twin plate frame. The rear swing arm uses the same twin plate design and sports dual coilover rear shocks. 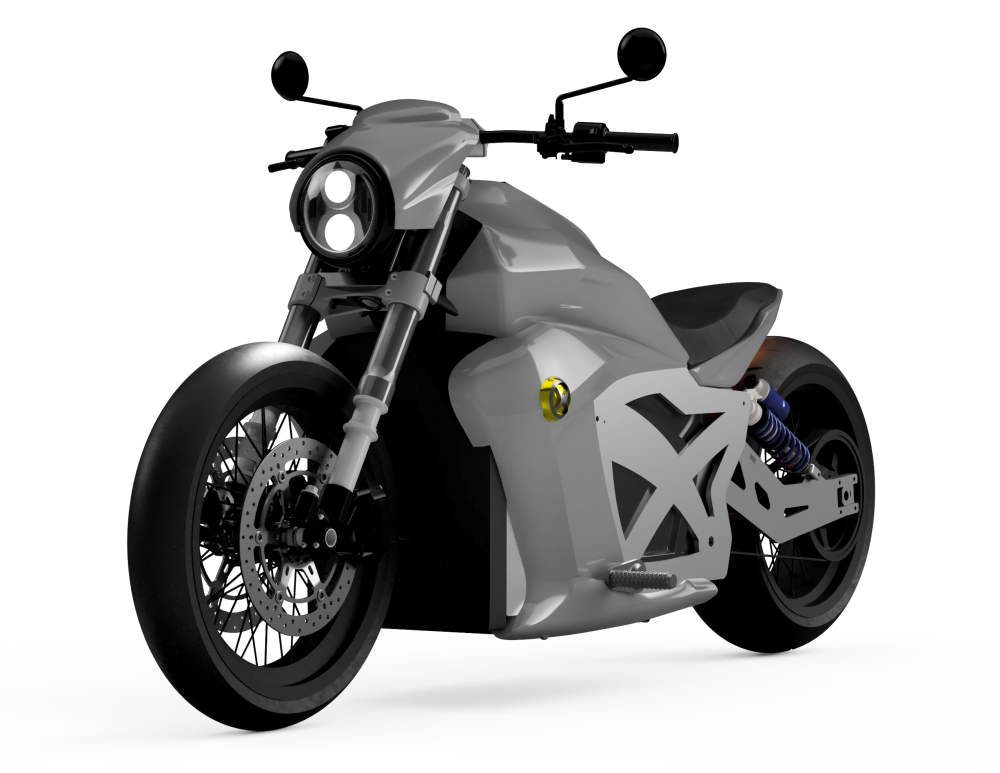 Evoke has been hard at work developing their latest Gen 2 battery modules. The batteries are capable of a 0-80% charge in just 15 minutes. The company says it has developed both the software and hardware necessary to precisely control the thermal range of the 18650 battery cells during such rapid charging.

The Evoke 6061 will be packing 6 of these batteries modules for a combined 15.4 kWh of energy capacity.

“The modules are permanently fixed and make up a semi-structural component of the bike. Charging currently works with DC Fast Charge in China and we will be integrating with CCS in the US and Europe by the time we’ll ship.”

The extra power provided by the new motor and batteries offer a higher top speed than the previous 130 km/h (81 mph) with Evoke’s Urban Series electric motorcycle. The company isn’t ready to reveal the Evoke 6061’s top speed publicly yet, but I’ve been given a bit of behind the scenes info and I can say for sure that no one will be able to complain that it doesn’t go fast enough.

Evoke is expecting the new bike’s range to exceed that of the city range figures of bikes like the Zero SR/F and Lightning Strike, which are both capable of nearly 320 km (200 mi) of range.

When will we see the Evoke 6061 electric motorcycle on the road?

While the specs sound great, we’ve heard of impressive sounding electric motorcycle concepts that never materialize before. I pressed Nathan on the issue, and he reassured Electrek that Evoke was using its experience designing and producing the highly acclaimed Urban Series electric motorcycle to ensure their new Evoke 6061 would be a true success. The company plans to have the first test bikes on the road by June, which they’ll use to finalize the component choices. Afterwards, Evoke expects to have a market-viable bike by the end of this year.

With electric power train and battery manufacturing taking place solely in China (i.e. all of Zero’s and the Strike’s components are coming from China), it gives us a solid supply chain pathway for the creation of this bike. So being in China with an international design team really puts us a few steps ahead of the other guys. It also allows us to prototype quickly and cost effectively compared to doing this in the US or anywhere else.

That efficiency should help Evoke expedite the rest of their development process and roll out the Evoke 6061 sooner.

Pricing hasn’t been confirmed yet as the bike’s components aren’t yet finalized. The Urban Series already offered by Evoke is currently available for around $9,500, though it has lower performance than the 6061.

Initial plans are for a domestic roll out in China first, but Evoke has already begun expanding internationally. They’ve told Electrek that more details regarding the company’s international sales strategy will likely be available over the next few weeks.

I’m excited by the Evoke 6061. There’s a distinct lack of good cruiser-style electric motorcycles on the market.

Everyone seems to be building roadsters and sportbikes. Roadsters and naked bikes are certainly more comfortable than sportbikes over longer rides, but it’s hard to beat a cruiser on ride comfort. Not everyone wants to set land speed records on their way to work. Many just want to sit back, relax and enjoy the ride. So an electric cruiser option is definitely going to please a lot of people.

As far as specs, I hope the Evoke 6061 can deliver. I’d be more skeptical if this was some startup building their first bike. We’ve seen a lot of startups like that, promising impressive designs and specs. But Evoke has been building electric motorcycles for years and has received great reviews for its Urban Series bikes. So I’m confident that the company will be able to deliver on the Evoke 6061.