Swagtron’s new EB12 electric bicycle is its first foray into full-sized commuter bikes. And while they didn’t quite hit the ball out of the park on their first try, they got it pretty darn close to the fence.

With a sleek design and an electric boost, the Swagtron EB12 could be the perfect option for cash-strapped students or budget-minded city commuters that want a good bike for an even better price.

I was definitely jazzed when I first heard about Swagtron’s EB12 electric bicycle.

I’ve previously reviewed the company’s sub-$500 folding electric bicycles and even their $270 electric scooter and came away impressed.

Swagtron is known for building the most affordable electric bicycles in the game. And their playbook isn’t to just pump out cheap crap like some other budget companies. Rather, they cut out all the fat – all the components that aren’t strictly necessary – so that they can focus on putting decent components on whatever is left.

No one expects a Swagtron e-bike to get passed down to their son. But they do expect a decent quality e-bike for an unbelievable price.

And that’s exactly what Swagtron has done – yet again – with the EB12 electric bicycle. It’s a hardy commuter e-bike that offers exactly zero fancy features other than that it will get you where you’re going and look good while doing it.

Check out my video review below to see the Swagtron EB12 e-bike in action. 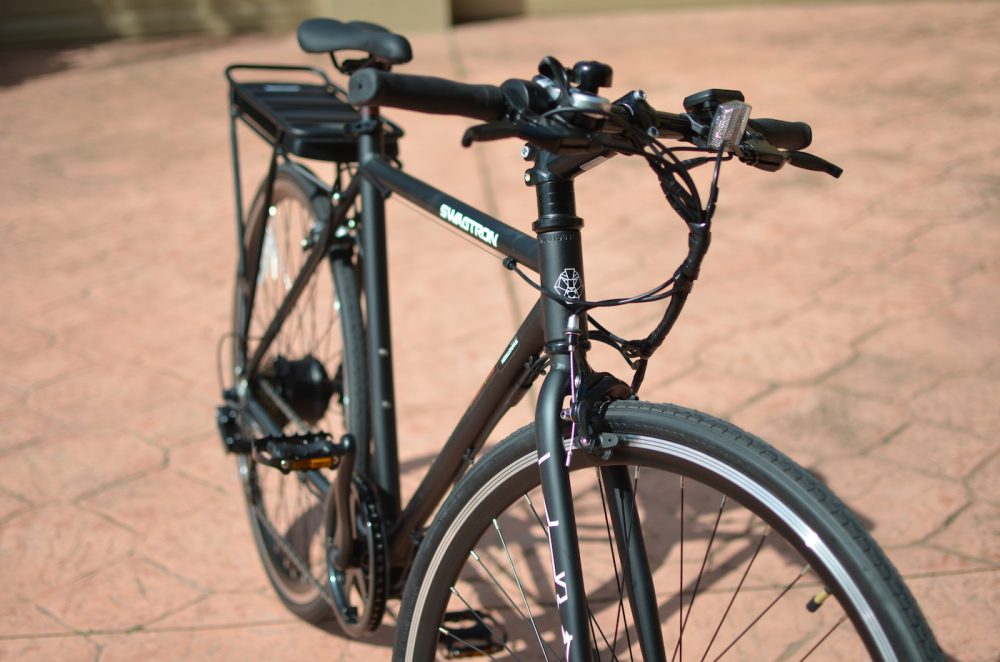 The Swagtron EB12 electric bicycle looks like your standard hipster road bike, yet it hides an electric secret. In the rear wheel sits a cute little 250 W hub motor connected to a slim-looking 270 Wh battery in a rack over the rear wheel.

The high-bar design makes mounting it feel like any other road bike – as in you’ll be swinging that leg up high. There’s no step-through option here like is becoming common on many other e-bikes.

That said, the road-bike feel is part of the charm of the Swagtron EB12. It feels perfectly at home on the street, where its narrow tires and stubby handlebar give it quick, responsive steering that borders on almost twitchy – in a good way. It’s perfect for swerving around that cabbie that just cut you off, or hanging a quick left when darting out of an alley while taking a shortcut to your favorite morning bagel place.

The ride is very much a forward-leaning affair, which might feel foreign to anyone used to a more comfortable cruiser-type electric bike. And it’s not that the Swagtron EB12 isn’t comfortable – it is. It just adopts the forward tuck that this bike geometry demands. The EB12 does use a riser stem though, which gets the handlebars up a bit higher and prevents you from going full peloton tuck.

Pedaling is quite smooth, especially considering there’s nothing super high-end on the bike. The only brand name you’ll find anywhere is the Shimano 7-speed drivetrain. And even then, we’re talking entry-level Shimano parts. But they work well and the bike is plenty easy to pedal. 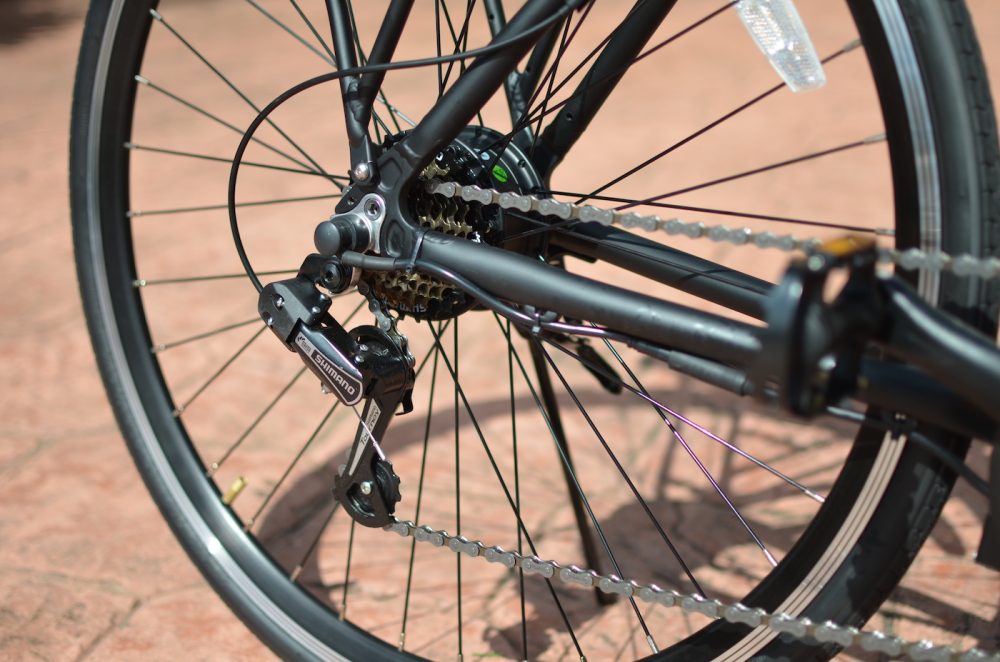 Once you switch on the pedal assist, the bike rides like a dream. The 250 W motor gives you enough of a boost to make the ride feel enjoyable instead of labor-intensive. For me, it feels like the perfect amount. I get the pleasure of pedaling to my heart’s content and feeling like a true cyclist – except that I’m barely breaking a sweat even while going full out at the bike’s blistering top speed of 16 mph (25 km/h).

However, the motor is no powerhouse. This is all too evident when you use the throttle instead of the pedal assist. When getting rolling from a stop, the throttle-only acceleration leaves a bit to be desired. You definitely get moving and you can get up to speed perfectly fine on throttle alone, but it will take you a while.

Some e-bikes are designed to be operated throttle-only all the time, but this isn’t really one of them. It can do it, but the large diameter wheels reduce the motor’s already modest torque and mean that any pedaling action will be greatly appreciated. 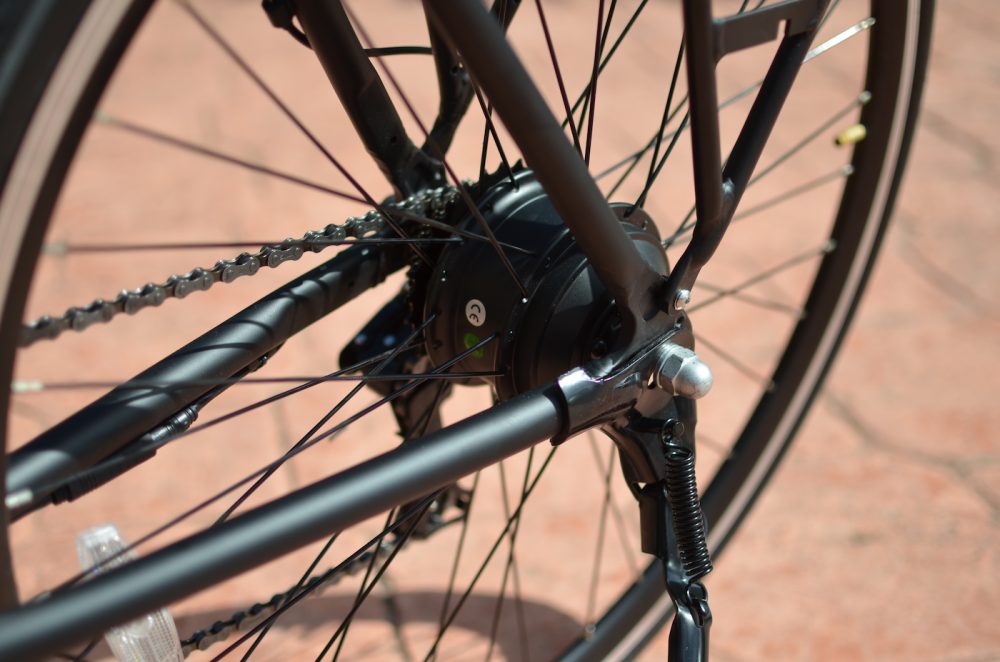 When it comes to hills, don’t even think about going throttle-only on anything above a small incline. You can definitely get a surge from the throttle or pedal assist while climbing larger hills, but the motor will be an assist – not the main show.

Basically, that means this is very much a bike for those that don’t mind pedaling occasionally and better yet, even enjoy it.

Then there’s the suspension – or lack thereof. Like any other road bike, there’s no suspension to speak of. See a pothole? Stand on the pedals. Your legs become the good old fashioned suspension that road bikers have relied on for decades.

And for $999, that’s ok by me. The bike works great, feels good under me and looks like something I’d want to be seen riding. And it’s such a joy to pedal that I don’t even mind having to help out by pedaling every now and again on the hills.

I could see it being the perfect campus commuter for students at college or a great city bike for anyone hoping to commute on a budget.

The range isn’t going to blow you away, but it seems perfectly capable of around 20 miles (32 km) or more with occasional pedaling, and that’s enough to last most city residents for multiple days of riding before needing to top off the battery.

And at that point, you can either remove the battery to charge it inside or even throw the top tube over your should and carry the 39 lb (17.7 kg) e-bike up the stairs with you. Don’t try that with a 68 lb (31 kg) e-bike!

So I’m quite happy with the Swagtron EB12 e-bike. It’s no powerhouse, but it’s the modestly priced, good looking e-bike we need right now. Of course, it’s going to be a bit difficult to get your hands on one right now. The bike was only just released and is already sold out just about everywhere. Swagtron told me they are hoping to be restocked soon, but that just shows how in-demand the bike is. So I wish you luck on getting one of your own!

What do you think of the EB12? Let us know in the comments below.