Love them or hate them, electric scooters are quickly becoming ubiquitous in US cities. Riders are using them for everything from last-mile vehicles for reaching the train station to complete car and bus replacements for entire commutes.

Lime, Bird and other electric scooter sharing companies deserve much of the credit for introducing the concept of electric scooters to the public on such a large scale. But the manufacturers that produce the affordable little EVs are the true heroes here. They’ve taken all the technology and hardware that make electric bicycles such good commuters and stuffed it all in the form factor of a scooter for a fraction of the price. And in the case of Swagtron’s Swagger 5 scooter, which is currently on sale for just $270, that fraction is a tiny one indeed!

For those that don’t like to read too far, here’s the summary of my review:

The Swagger 5 electric scooter is one of those “best bang for your buck” types of scooters. While not the best scooter on the market, it provides incredible value for its low cost.

The aluminum scooter feels well built and the ride is amazing on smooth roads, trails and sidewalks. The convenient airless tires remove any chance of a flat tire, but they do make the ride a bit harder on uneven terrain like cobblestones and pot holes.

Basically, while I’ve seen sexier scooters, this is the one I’d choose if I’m on a budget but still want to feel like I’ve got a premium scooter. 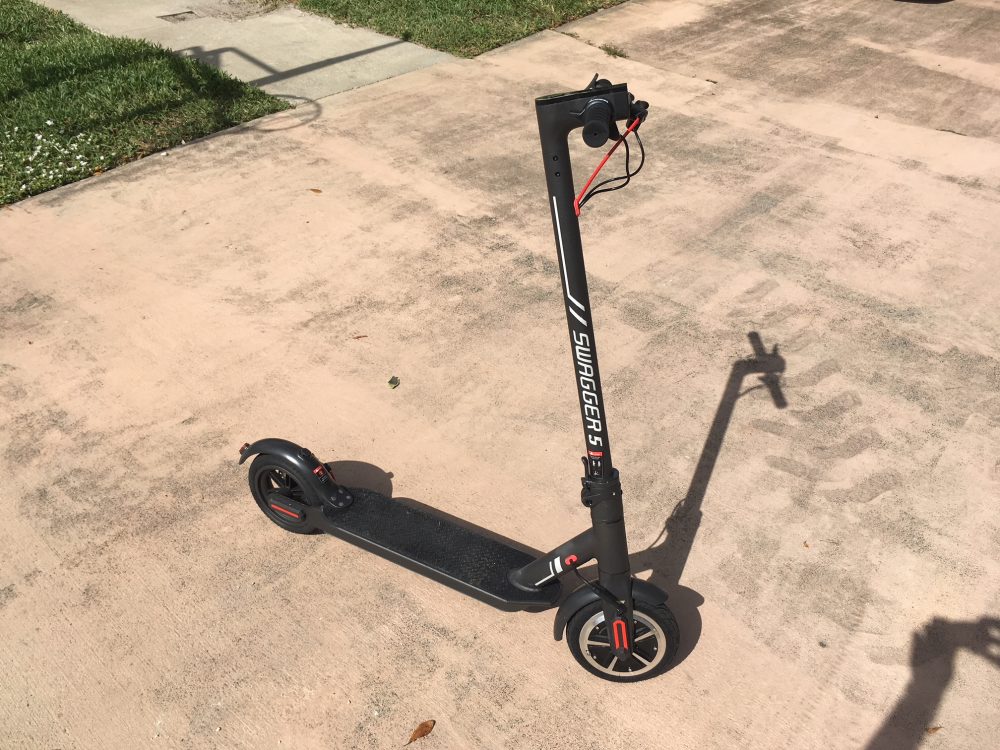 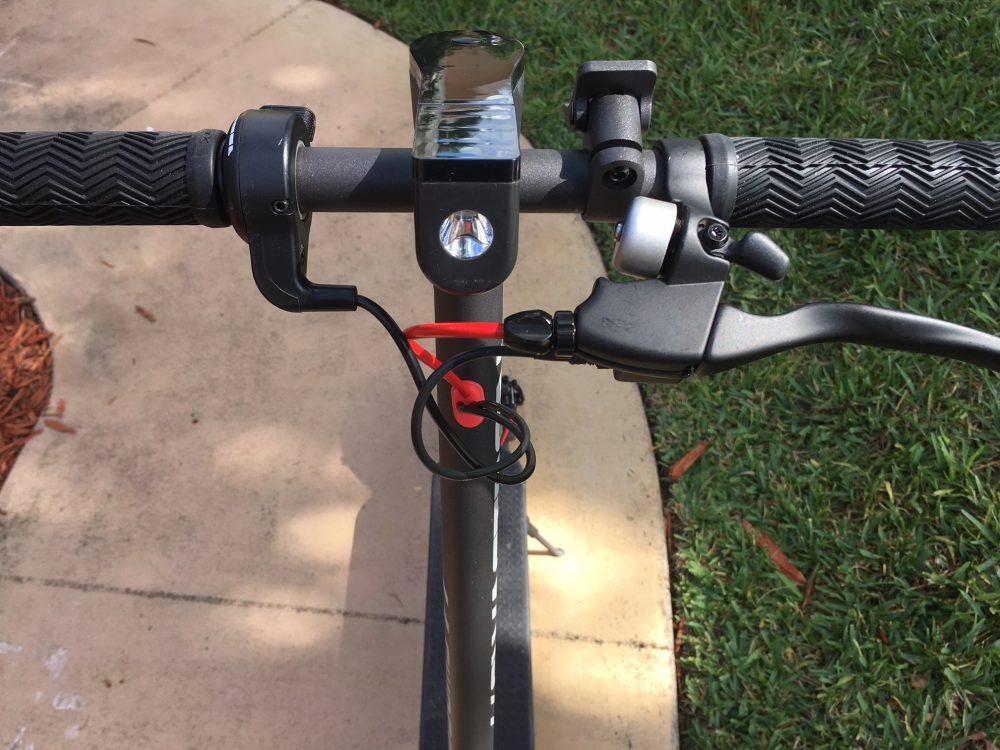 The Swagger 5 offers quite good performance for the price. It will reach 18 mph decently quickly, though I never felt like the scooter was going to blow me away with its power. It feels more like a sensible, modest amount of power. Nothing fancy, but it gets the job done.

The 250 W motor provides plenty of regen braking, but the rear disk brake adds extra braking force when you need to come to a quick stop.

I really like airless tires because they mean you never have to worry about getting a flat tire. I mostly ride in on-street bike lanes, which are paved and smooth. The Swagger 5’s ride quality is excellent on those smooth surfaces. However, the ride quality isn’t as good when you move to rough surfaces like brick paths, cobblestones or just cracking sidewalks and normal pot holes. Airless tires just don’t have the same damping effect as pneumatics. But it’s all a tradeoff, and if you stay on smoother paths then you’ll never notice the difference.

The scooter folds down to around 42″ x 17″ x 19″ (107 cm x 43 cm x 48 cm). It is easily carried by its steering stem, which functions like a handle. The handlebar mounted clip hooks onto the rear fender and holds the scooter securely folded. It’s perfect for stashing under the seats on a subway train or in the trunk of your car.

The battery life was sufficient for somewhere around 8-10 miles (13-16 km) with normal use. I did testing in the three different speed levels and mostly on flat ground. If you ride at top speed all the time and climb hills, expect to get a bit lower range. If you cruise at modest speeds, you might do even better. Swagtron actually rates the Swagger 5 for up to 12 miles (20 km) of range, though I must have been riding a bit too fast to get the full claimed range.

I’d love a bit more range so I didn’t have to charge daily for longer trips, but I can see that it’d be hard to maintain the $270 price with twice the battery. And honestly, if you need to go more than 8 miles in one go, a scooter probably isn’t the best vehicle for you. 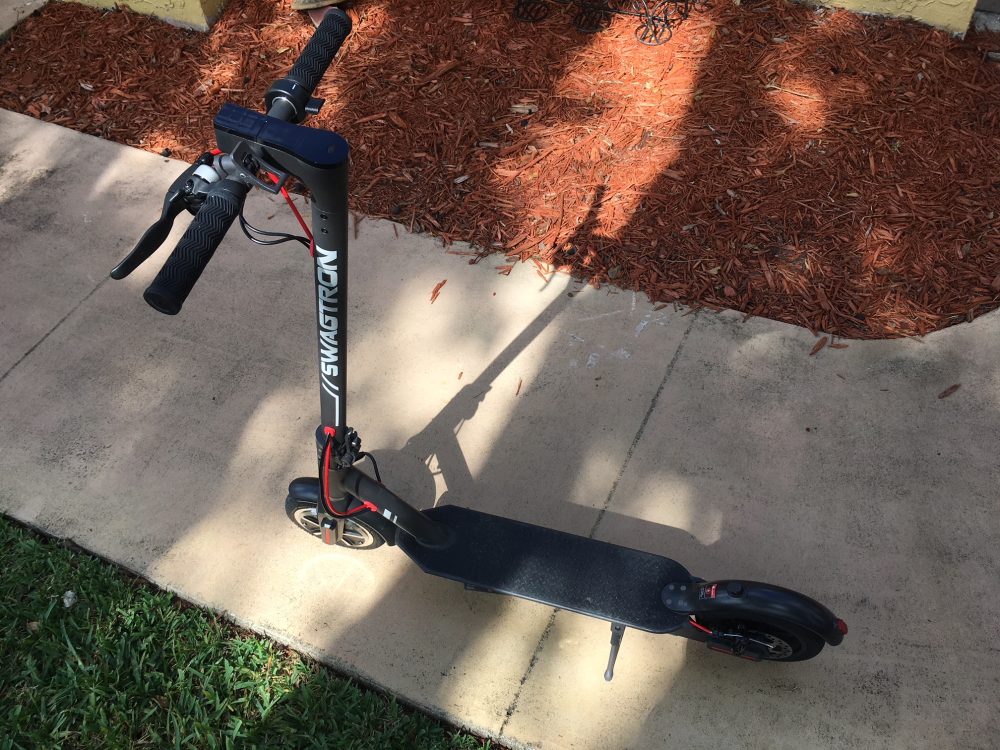 The lights work well and are plenty bright to be seen at night. I really like that the tail light flashes when the brakes are applied. It won’t really mean much to cars, but people seem to get the idea in crowded bike lanes.

The Swagger 5 seems well put together and capable of handling larger riders. Swagtron rates it up to 320 lbs (145 kg). Since I don’t even weigh half of that, I had my brother-in-law test it out for me. He’s north of 200 lbs, and the scooter worked just as well for him as it did for me.

One of the few downsides I could find on this scooter is that the speedometer and battery meter were barely visible in direct sunlight. They are LED-based and hidden under a slick looking cover. It looks great indoors, but as soon as you get into the sun, it becomes hard to read the display. The scooter comes with a phone mount though, so if you use the Swagtron app then you can view your speed and battery right on your phone. Not a perfect fix, but it’s something. 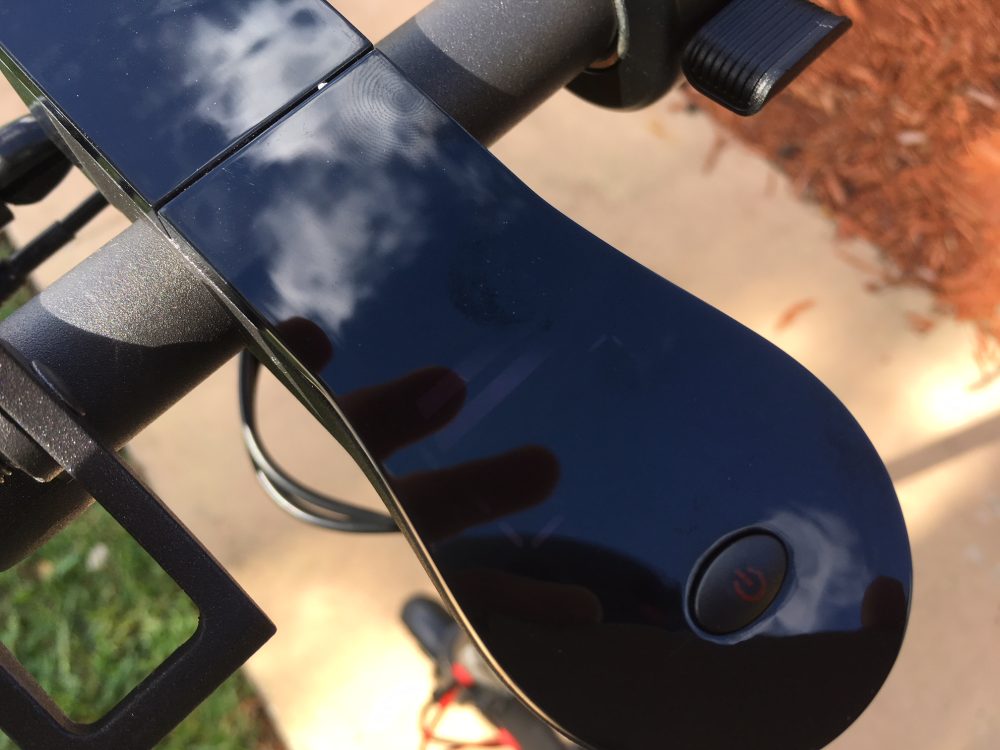 The scooter works great, but the screen is hard to read in bright sunlight

To recap, I found that the performance and quality of the scooter far exceeds the price, making this an incredible deal. That is what I’ve found with Swagtron’s other products as well – excellent bang for your buck. I’ve ridden their $499 EB-5 and $449 EB-1 electric bicycles and came away with the same impression.

The company has done an excellent job of maintaining a good quality product while offering an excellent price. The Swagger 5 isn’t the nicest scooter in the world and it doesn’t have some of the fancy materials and features of scooters three times its price, but that’s not the point of the Swagger 5. This is a scooter for people who just want something to work with without spending a fortune. If you’ve been wanting an electric scooter to keep in your trunk or to play around with in the park, this is the one for you.

The Swagger 5 is normally priced at $399, which is already a good deal. But right now you can actually do even better. The scooter is just $299 on Swagtron’s site if you use the coupon code “ELECTRIC50”. Or you can take advantage of the sale on Amazon to get the Swagger 5 for just $270. That’s an insane deal in my opinion, as it puts the Swagger 5 at around half the cost of most other scooters.

What do you think of the Swagger 5 electric scooter? Let us know in the comments below.