When you think of scooters, you think of Razor. That nostalgia is hardwired into my brain from childhood. Hitting jumps. Carving corners. Smacking my ankle on that freakin’ aluminum deck each time it would spin around. Oh, the good ol’ days.

But what you might not realize is that the Razor of yesteryear is still a potent force in today’s massive electric scooter market. I’ve been riding around on their latest Razor E-XR electric scooter and have been surprised by how powerful and robust this thing is.

Razor’s new E-XR electric scooter is their most rugged electric scooter yet. And that’s no accident. Rather, it’s largely based on the company’s ruggedized sharing scooter designed for its dockless scooter sharing program.

The Razor E-XR features wider tires and a larger deck than most other scooters in its class, helping it to feel more like a vehicle and less like a toy.

With an MSRP of $699 before additional discounts or sales, it is price competitive with many of today’s adult electric scooters, yet offers a stronger design and more powerful motor.

Here are the E-XR’s tech specs, so we can see how it stacks up against the rest of the field.

Check out our video review below, then read on for all of the details!

The Razor E-XR isn’t much to look at, but it is a surprisingly powerful electric scooter.

It is rated at 350 W, but that can’t be accurate. The rear wheel hub motor feels so much stronger than that. It has powerful acceleration and decent hill climbing ability, though it won’t be winning any Pike’s Peak Challenges.

I’ve ridden other 350 W scooters that don’t offer nearly this much acceleration.

The deck is surprisingly wide, and follows Razor’s standard design scheme of a big deck surface that wraps up and over the rear wheel. The entire surface is covered in the rubber grip deck material, meaning you can stand on the lower deck or up on the rear fender part of the deck.

There’s no foot brake, but rather a handlebar mounted disc brake lever. I actually prefer it this way. The bicycle-style brake lever feels more intuitive to me, though I know many people prefer foot brakes. Plus the brake lever activates the rear brake light, which is a nice touch.

I prefer the large size of the Razor E-XR’s deck, as compared to Razor’s E-Prime that we previously reviewed.

The front headlight is crazy bright. That’s probably thanks to the rental fleet as well, since you’ll want bright lights on any fleet-level vehicle. 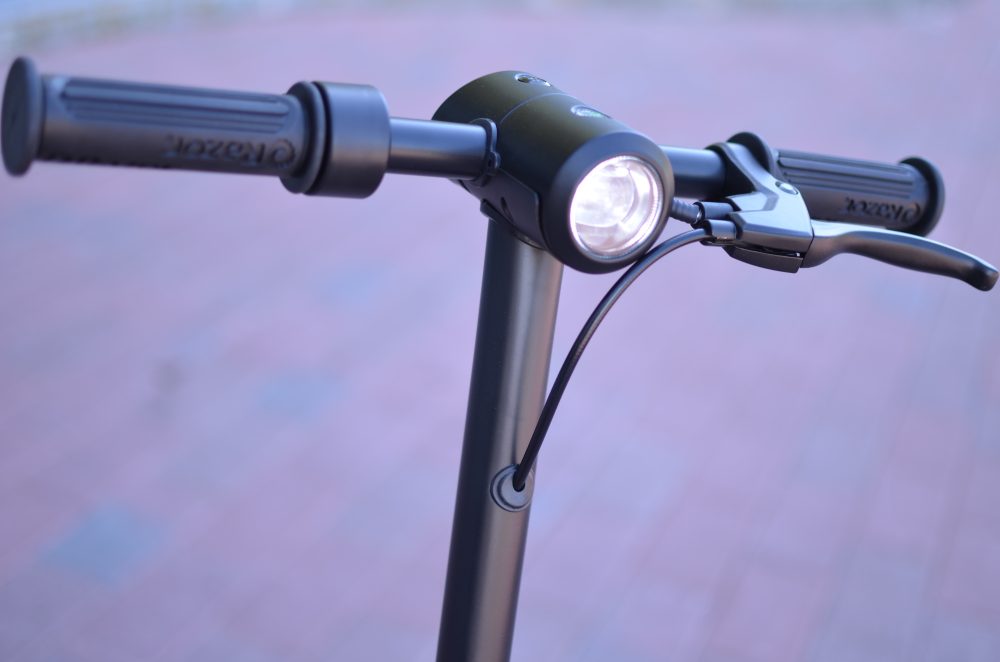 The rear hub motor hidden under the raised deck uses an 8-inch airless tire, while the front wheel has a larger 9-inch air-filled tire. The combination of air-filled and airless tires seems a bit odd to me, but perhaps it was done to increase convenience. That rear wheel will be annoying to remove, so an airless tire means you never have to worry about a flat.

The front tire would be easier to slide out and swap a tube in, and having an air-filled front tire helps smooth out the ride. It also cuts down on vibrations that travel up the stem to the handlebars.

Speaking of the stem, it doesn’t fold. That’s really rare in electric scooters. They nearly all fold. To be fair, I almost never fold my electric scooters, but for some reason I like knowing that I can if I need to.

The reason that the Razor E-XR doesn’t fold is that it allows the scooter to be more rugged. A folding stem is inherently weaker, so the Razor E-XR’s lack of a folding mechanism makes the scooter stronger. I was hopping and jumping the scooter during my test riding and I never felt like the scooter loosened up on me or exhibited even the slightest flimsy feeling. So while you do give up some storage convenience with the lack of folding, the strength gains might be worth it to many. 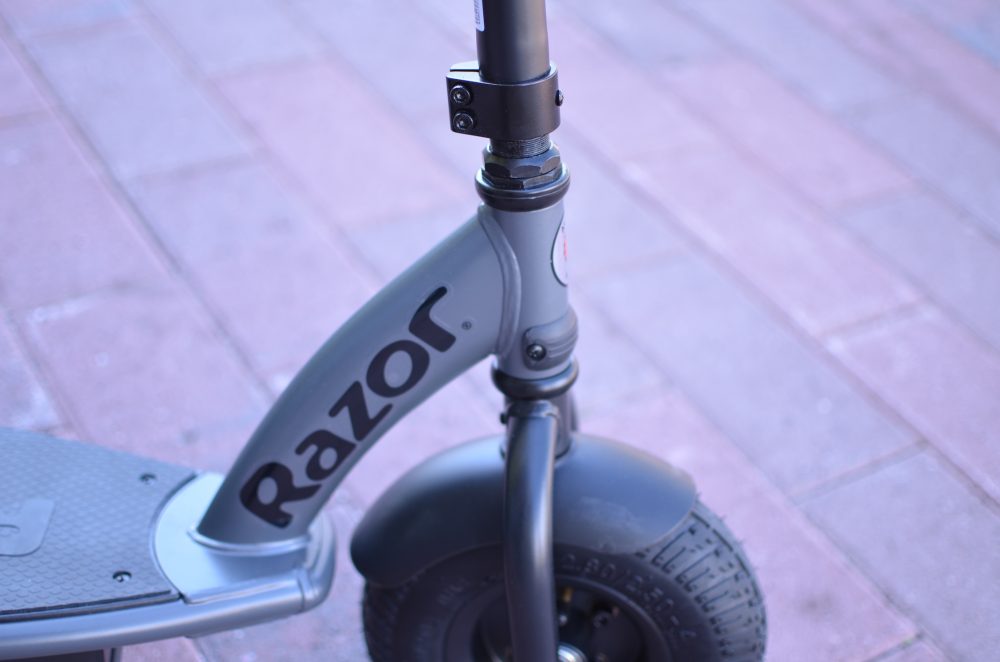 To counter the advantage of the superior build quality and ruggedness of the scooter, a disadvantage of the Razor E-XR is its lack of screen or real user interface. You just get a single LED, that’s it. You’ll have to guess to see how fast you’re going.

I can live with the lack of screen, speedometer, or multitude of riding modes. What you get is a simple, powerful, and robust scooter that offers you exactly zero unnecessary frills. It simply works and gets the job done as an effective commuter scooter.

What do you think of Razor’s E-XR electric scooter? Let us know in the comments below, and don’t forget to check out my new gear review roundup for all of the best gear you need for commuting on an electric scooter or e-bike.