A common refrain about electric cars is that they’re fine for city driving but can’t do road trips.  This has been disproven many times, and Tesla owners in particular have an easy time on road trips due to Tesla’s excellent Supercharger network.

But today we’ve seen yet another reason not to worry about the capability to take EVs on long trips, as Bjørn Nyland has managed to drive 2,781km (1,728mi) in 24 hours in a Tesla Model 3 Long Range AWD.  Nyland set this record on IONITY quick chargers in Germany because currently, that network is significantly faster than Tesla’s Superchargers.

The previous record was 2,644km, set last year in a Model 3 by the Austrian G-Electric team including German Horst Lüning. Lüning previously held the record before that with 2,424km in a Model S.

Nyland wanted to emphasize that this record could be done in “realistic” conditions, so there was no closed course and common road rules were followed.  The record was set in Germany, on the Autobahn, and was done at high speeds, around 170km/h (105mph) much of the time.

This is different from most EV single-charge distance records because those generally focus on extreme efficiency and stay at low speeds the whole time.  Nyland’s efficiency over the course of the 24-hour drive was 311 Wh/km, which is well above the ~160 or so Wh/km the car is expected to get in normal driving conditions.

Staying at high speeds inbetween stops resulted in an average speed of 115km/h or 72mph over the entire 24 hours.  Essentially, he was able to travel the same distance as if he drove at US highway speeds consistently for 24 hours without stopping at all.

It was also raining for a portion of the drive, which reduces efficiency by increasing rolling resistance between the tires and the road.  Nyland rotated between several drivers during the 24 hours and livestreamed it on his YouTube channel. 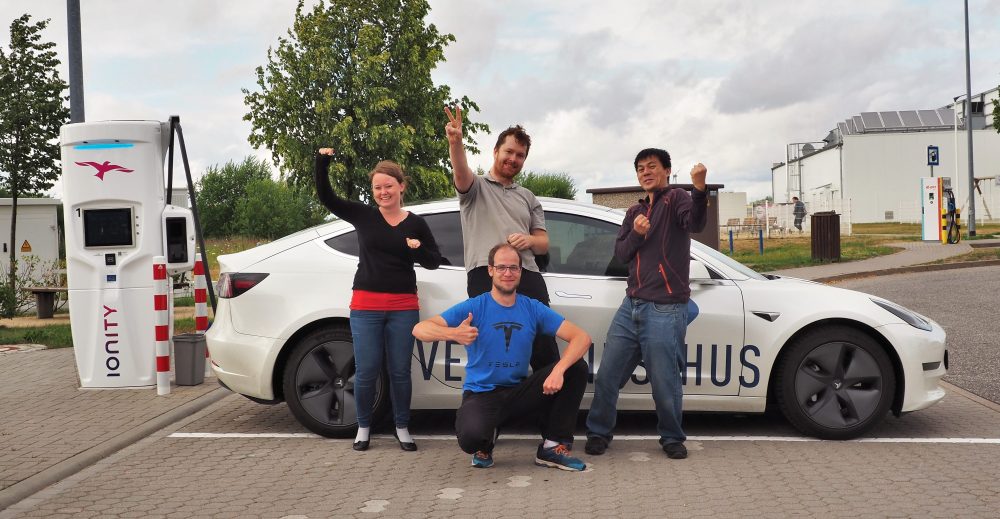 Nyland focused on driving quickly and charging only up to 50% or so, in order to keep charge rates as fast as possible.  Most EV quick chargers “taper” at high state-of-charge, such that charging rates slow down as the battery gets more full.  For faster road tripping, it’s better to leave before your battery gets completely full.

The IONITY chargers used had a peak charge rate of about 195kW, faster than European superchargers currently.  Tesla has a 250kW V3 supercharger coming out soon, but it’s not currently rolled out in Europe and only in a few locations in the US.  Nyland previously did a “charge-off” between the Model 3 and Audi e-tron on IONITY chargers, which seem to work quite well for Europeans. The existence of another good, high-speed charging network can only be beneficial for EV owners.

The whole drive consumed over 850 kWh of energy, which is about 10 full charge-equivalents of the Model 3 Long Range AWD’s battery.  Nyland stated that it would have cost about 300 Euros total for the trip, but IONITY sponsored this record attempt and covered his charging costs for him.  IONITY charges 8 Euros per session no matter the length of the session, but since Nyland did short charges from ~10-50% of battery, he was optimizing for charge speed not charge cost.

Tesla drivers display time and time again just how suitable EVs can be for long drives, and yet it remains an issue of public concern.  No matter how many times a Tesla owner goes on a long drive and doesn’t feel restricted at all by Supercharging (or in this case, IONITY), people are still skeptical.

Personally, my experience is that I’ll drive normally, and whenever I would stop for lunch or bathroom breaks, I’ll just plug in the car, eat at whatever pace I normally would have eaten, and then unplug and leave.  In this way, I spend no actual time charging beyond what I would normally spend stopped.  Nyland previously did a “real world” “race” of his Model S vs. a Honda S2000 to see which one did the better “realistic” roadtrip, including a stop for food, a drink, and a bathroom break, and showed that a road trip in each vehicle would be quite similar.

For niche applications or exceptionally hurried drives, you might end up with a few minutes waiting for charging – but this is offset by the ten minutes of gas station visits you manage to skip every week by never having to go to fuel your car anywhere but home.  So overall, EVs are simply more convenient all the time, and still perfectly capable of all but the most extreme road trips.

And speaking of extreme road trips… EVs shouldn’t be so bad for those either, as we saw today with the reveal of the new Extreme E Odyssey 21 off-road racing vehicle.

So come on everyone — just get an electric car already.

Update – Nyland has uploaded a short video edited from the footage of the day, which you can watch below: