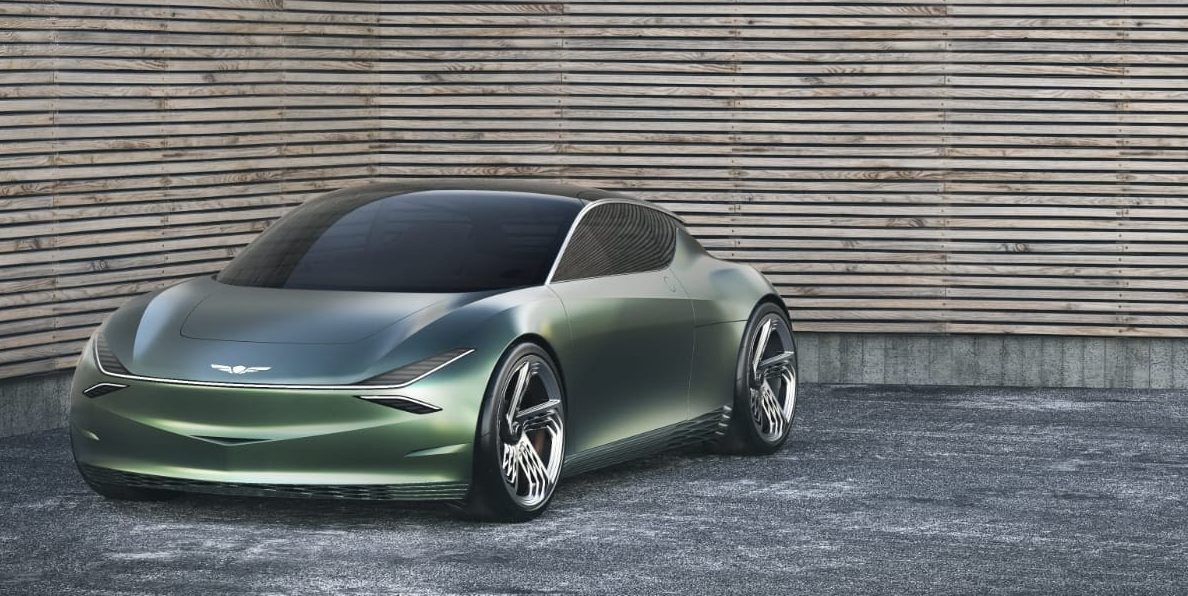 Genesis revealed the “Mint” concept, a small electric car made for the city but focused on a luxury experience, today at the New York Auto Show.  Genesis calls the Mint “a new vehicle typology” and says that it offers an “innovative user experience.”

There is no current plan to bring the car to production.

The Mint concept seems to be mostly a design exercise, as best we can tell.

Genesis’ press release is light on specs, though they state that the battery could be capable of 200 miles per charge and 350kW quick charging.  On a car that small, with likely a small-ish battery to boot (maybe 50kWh for that sort of range out of such a small car?), 350kW charging would certainly get you back on the road very quickly.

But, since Genesis has no plans to bring the car to production, maybe specs don’t really matter too much right now.  Let’s have a look at the design:

The car has a small footprint, similar to a compact hatchback rather than Genesis’ other sedans.  But with a low-slung roof and wide stance with large rims and tires, it looks quite sporty.  It also has no visible grille, revealing its electric nature (and, of course, no tailpipe).

It’s a two-seater, small enough that Genesis has forgone even the illusion of a vestigial rear seat, instead opting for a large “parcel shelf” on which to put a very small amount of cargo.  This cargo area, such as it is, is accessed through scissor-style doors, rather than a conventional hatch.

The interior is almost entirely covered with leather, and the windows are large all around and above, probably making the interior seem much more spacious than it is.

Genesis calls this a “new vehicle typology,” and beyond the strange hatch doors, they’re right.  There aren’t a lot of luxury two-seater sporty compact cars out there.

Genesis is the luxury vehicle arm of Hyundai, which so far produces no electric vehicles.  They’ve been teasing an entry into the electric vehicle market for a while now, though we haven’t seen any firmer plans about an actual vehicle release.

At last year’s NY Auto Show Hyundai showed off the Genesis Essentia concept, and since then have suggested that the car could be built in very limited numbers.

When we last reported on an electric Genesis, the plans were to have something “in 2021 with a range of 500 km (310 miles) per charge.” This new Mint concept doesn’t seem to fit that bill, with a planned 200-mile range, and perhaps too small of a size to be considered a standard sedan.

So we are still waiting for confirmation of a real, production-ready Genesis EV which could be built in reasonable volumes in 2021.  It’s nice to see concepts, but what matters is getting rubber on the road.

Beyond Genesis, Hyundai already has a few electric cars in its stable, with the Hyundai Ioniq Electric and the newly-released Kona EV.

Hyundai also shares technology with Kia, and both companies are partial owners of each other.  Through this partnership, they also produce the Kia Niro EV and Kia Soul EV.

So there are some good EVs coming out of the Korean automaker(s), but this is different that what’s available now in that it is more luxury focused.  Though, it’s still a concept.

As always, our take on concept vehicles is: make them already.

We like seeing exciting concept cars, we like seeing automakers imagine what can happen in the future, and we like that concepts are becoming more and more EV-centric and moving away from gasoline, showing that the industry knows EVs are more exciting, and that EVs are the direction everything is going.  That’s all great. Get people excited about things they ought to be excited about.

But I’ve been seeing electric car concepts for well over a decade now.  They’re always “thinking about production intent” and these concepts “signal a shift towards electrification” for automakers.  But here we are, and where has this shift been?  Most automakers still sell maybe ~1% of their cars as EV models.

Hyundai and Kia, put together, have zero dedicated electric models.  Their multi-powertrain models are pretty competent, but so far they have produced no cars which have been designed as electric from the ground up, and are also not selling any EVs nationwide, instead focusing only on California and perhaps a few other ZEV states.

So any take on this vehicle needs to keep that in mind.  This is a concept car, with no production intent, from a company that, like so many others, claims to be “shifting” to an electric strategy but continues to lobby against EVs and still has not produced anything but compliance cars.  Even though we at Electrek very much like the Ioniq EV and the Kia Niro EV, both of these cars are only being sold in CARB/ZEV states, and both are retrofits of a gas vehicle platform.  This is not how you signify a serious shift to EVs.

We welcome a serious shift to EVs.  We welcome bold new concepts, we welcome big changes in strategy which will help our society adapt to new technologies and address the problems of climate change. We do not, however, like window dressing.  Stop teasing us with cars that will never be made.  Start making them.  EVs aren’t the future, they’re the present.  We’re tired of waiting.

Now that that’s out of the way, let’s get to our take on the actual concept.

The Genesis Mint concept looks like an interesting new direction to take cars.

The Mint looks sporty, must be fun to drive, will certainly be efficient, and doesn’t skimp on luxury.  As a person who likes small cars (I drive a Tesla Roadster, after all), I could be tempted to want one of these – just as I’m tempted by the Mercedes EQA concept we saw a year and a half ago (and have heard very little about since).

While small city hatchbacks may not be particularly popular in the US, they are popular in other regions.  And perhaps the reason the US doesn’t like them is because of their perceived “downmarket” nature, as most hatchbacks are designed as small cheap econoboxes.  The US luxury buyer considers size as an important metric, and large cars not only sell well but command price premiums.

So we’re not sure how much success this car would have in the market, especially in the US, due to the aforementioned biases against small cars here.  But if it did succeed anywhere in this country, a big city with a lot of wealth, like New York, might be that place.  And Asian automakers have had success at bringing small cars to the US and selling them well here in the past, during times of change for the auto industry – see how Honda and Toyota revolutionized the industry in the 70s with their small cars.  So it could be possible for this car to do well here, but a lot of factors would probably need to align to make it work.

Alternately, given that the Essentia concept was well-received enough last year that Genesis stated they might bring it to production in small numbers, perhaps the Mint could receive the same treatment.

Or you could just continue losing market to Tesla.  Your choice.