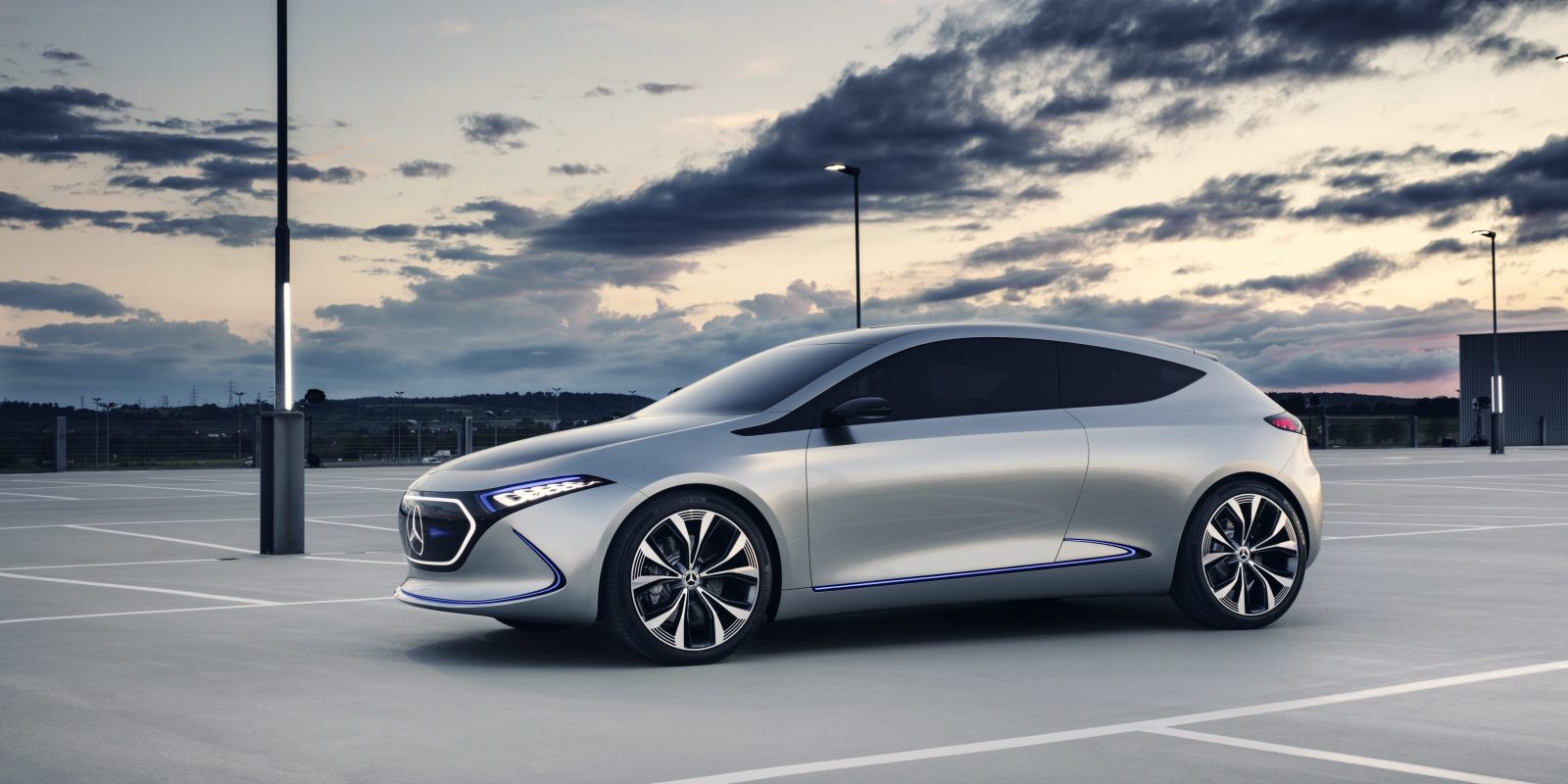 The Mercedes EQ sub-brand got its second entry today with the new EQA compact all-electric vehicle concept, unveiled at the Frankfurt Auto Show today.  We heard about this upcoming debut a few weeks ago, but this is our first time seeing the concept and hearing about what possible features the car might end up with.  Unlike other concepts released today, this one has a few more details and gives us an idea of what Mercedes is looking towards in the future.

Comparable in size to the Mercedes A-Class but with two doors instead of four, the EQA is expected to have a “real-world range” of 400km (250 miles – but on NEDC, so likely closer to 180-200 miles EPA range) from an up-to-60kWh battery, dual motors with over 268hp (200kW) and all-wheel drive delivering 0-100km/h (0-60mph) in around 5 seconds, and “seamless charging” which means the ability to use standard AC charging, DC quick charging (able to add 100km/62mi of range in 10 minutes), and even inductive charging.

While these specs are obviously not finalized, as is to be expected of concept cars, this release does seem to show us a little more about Mercedes’ direction with their EQ brand.

We heard about inductive charging with the original “Generation EQ” SUV announcement, and Mercedes is now calling their approach “seamless charging,” which seems to point to some sort of Mercedes effort to simplify the process of charging at public charging stations. Currently, with multiple different charge networks and different prices at different locations, with some charging based on time and some charging based on power delivery, this is a much more confusing process than it needs to be, so if Mercedes can make some headway here then it will be welcome.  They’ve got as good a chance as any manufacturer at doing so, given the large investment they’ve made into ChargePoint, a public charging station installer.

Another tidbit of note from the “key facts” portion of Mercedes’ press release is the mention of “scalable battery components” and range “depending on the battery capacity installed.”  It looks like Mercedes may go the Tesla route and offer multiple battery configurations in the same vehicle.  It’s not clear whether their claimed 400km NEDC (180-200mi EPA) range is the larger or smaller battery, but it seems likely that they would have quoted specs for the larger configuration.  Or perhaps the configurations will book-end that number – with one battery offering 420km and another offering 320km, or something of the sort.  Given that Mercedes claims they’ll offer up to 60kWh worth of battery, I wouldn’t be surprised if they can pull off a little more than 200 miles worth of range (for comparison, the Bolt EV’s 60kWh battery got it an EPA-rated 238 miles of range).

Offering multiple configurations does indicate a little more serious effort from Mercedes.  Certain less-serious EV entrants have been offered in only one configuration, indicating that the manufacturer isn’t interested in selling them to large numbers of consumers with varying tastes, something that Mercedes seems not to be doing here.

It’s also clear that they’re focusing on performance, perhaps to challenge some of the “hot hatches” which are so popular in Europe. 200kW is a solid amount of power for a small car, about as much as the Tesla Roadster had (185-215kW) and nearly as much as one of the kings of the hot hatch world, the all-wheel drive Golf R (217kW).  The EQA will also have dual-motors for all-wheel drive and the inclusion of “two drive programs” with “a choice of individual drive characteristics,” which Mercedes has called “Sport” and “Sport Plus,” which let the driver choose different front-rear torque distribution.

Many EVs include a sport mode, though some can be uninspiring.  But if Mercedes has a big battery and powerful motors on a light car, and have been bold enough to name both modes “sport,” the EQA sounds like it will be a lot of fun to drive.  As an aside, I’ve never understood “ECO” modes on cars – if you want eco mode, then lift your foot off the go pedal a little bit.  Bam, eco mode.

And then for the fluff: Mercedes has added LED lights to the vehicle exterior, including inside the front fascia.  These lights apparently change colors and designs based on which “drive program” you are in.  Cool, I guess.

But the most important thing, as ever, is whether and when it actually gets made.  Their press release today did not specify when the car will be released, but the rumored target is 2020, which gives them a long way to go in three years.  Mercedes did claim that they will add ten all-electric cars by 2022, a task recently made harder as they killed off the only EV in their lineup.  But they’re making big promises for the new EQ sub-brand and investing a lot of money in EV and battery projects, so let’s hope that those promises and investments pan out.  I, for one, am eagerly awaiting a chance to put the EQA to the test on an autocross track somewhere, if Mercedes can deliver a car like they’ve announced today.